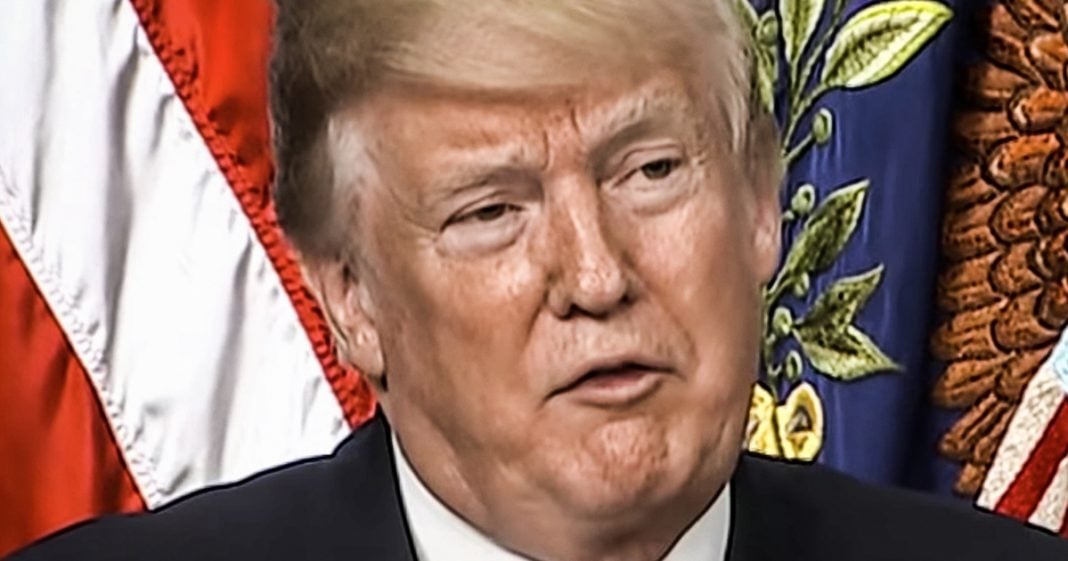 The past few years haven’t been kind to Donald Trump, and he completely deserves it. The man has spent his entire life creating an image that has been revealed to be a complete con job. His businesses are failures, his net worth is overblown, and his presidency has been an utter failure by every stretch of the imagination. Ring of Fire’s Farron Cousins explains how things went so bad for Donald.

You know, one of the best things about the Trump presidency is that it has destroyed the facade, the false image that this man, Donald Trump has been spending his entire life crafting for himself. You know, earlier this week we had that major New York Times report showing us the Donald Trump over the span of just a few years, lost $1 billion, billion dollars. He also ended up losing more money than any other individual taxpayer for at least two of those years. Nobody lost more money than him. This guy is a serial loser. Trump airlines, bankrupt Trump university, bankrupt and sued Trump steaks gone bankrupt. Trump casinos gone bankrupt. This man has spent his whole life failing, and yet for some reason the public always thought Donald. Even when we saw these stories in the news before he was ever into politics, we still thought, you know what? It’s still a pretty successful guy. I’m pretty good guy.

His daddy gave him millions of dollars that he’s squandered, that he lost, that he couldn’t turn a profit on to save his life, and yet somehow he was always revered as some kind of great businessman. Why? Honestly, simply only because he told us he was. That was it. That was the only justification. You look back at that record at the number of bankruptcies and failed business attempts that this man has had at his tax losses, and I don’t care what he says, like, Oh, well we, it was just a tax scam. Maybe it was, maybe it wasn’t. The point is, where did the money go? Show us your current tax returns. Let us compare that. See what your net worth actually is, because I promise you it is nowhere near the what, 10 billion that you’ve said it is probably not even close. I’m willing to bet you’re not even an actual billionaire, but Trump spent his entire life conning the American public and crafting this image that is now absolutely come crashing down.

We’ve learned that he cheats at golf, that he cheats on everything and everyone. The only people who don’t seem to open their eyes to this and understand it are the people that actually show up to his rallies because yeah, you know what? There actually are some Trump supporters out there, people who will vote for Trump in 2020 who understand that it’s all a ruse. They understand that he’s a con man, but they’re good little republicans and so they’re going to vote for whatever republican is there. We’ve seen that in polls. They think he’s not a good role model for children. They do think he interfered with the probes, the Mueller probe, they do think he’s probably worth a lot less than he is, but dammit, they’re going to vote for him again because they’re Republicans and so is she now. I say now because he hasn’t always been, he does whatever’s politically and economically expedient for him.

He is a complete and total fraud and most of the public understands that even if some of those who understand it want to continue to vote for him, you choose to be conned. At that point, I guess if that’s your choice, whatever. But the rest of us understand this. You can’t look back at this man’s life and say, you know what? He did pretty damn good. No. And the biggest kicker on this is a fact that had he not run for president and been installed by the Electoral College, he could’ve maintained, he could have maintained that facade. He could have maintained this little false image and been fine for the rest of his days. But he got greedy. And that’s what always happens when greedy people want more and more and more, and they keep reaching for more. Eventually it’s all going to come crashing down. It never being content with what you have always having to have a little bit more, no matter what it takes to get there, there’s only so long you can do that. And unfortunately for Trump, when he grasped that last rung of that ladder, which was the presidency, suddenly he realized how unstable that ladder was and it starting to tip and Humpty dumpty has come crashing down to the ground.