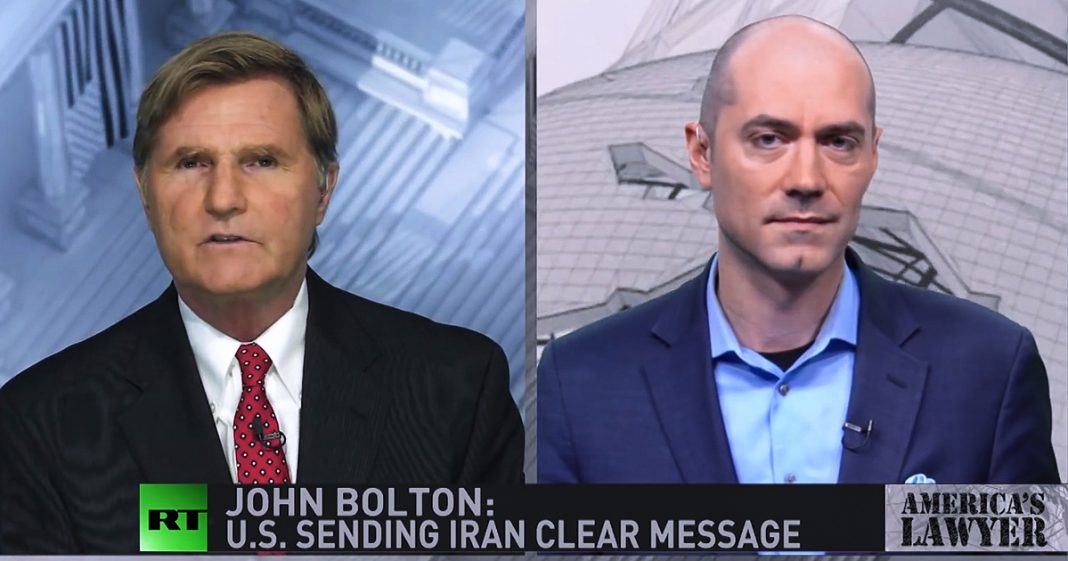 Via America’s Lawyer: Host of Watching the Hawks, Tyrel Ventura, joins Mike Papantonio to discuss the reasons behind national security adviser John Bolton’s statements about Iran, which has raised U.S. Iran tensions to a new high.

Mike Papantonio:             In response to what the Trump administration officials say are threats of a possible attack by Iran or allied fighters on American troops in the region, the US is deploying the USS Abraham Lincoln Carrier Strike Group and a bomber task force to the US Central Command region, an area that includes the Middle East. In Layman’s terms, the US is sending a big aircraft carrier chock full of war planes to the Persian Gulf to intimidate Iran.

The announcement was made in a press release by US National Security Advisor, John Bolton, who’s thirsty as he can be for a war with Iran even if he won’t admit it. In that statement, Bolton said the United States isn’t seeking war with the Iranian regime, but we’re fully prepared to respond to any attack, whether by proxy, the Islamic Revolutionary Guard Corps, are regular Iranian forces.

Joining us from DC is Tyrel Ventura, host of Watching he Hawks. Tyrel, tensions with Iran have escalated throughout the Trump presidency. This is a classic American foreign policy play. It’s a drain on the country with economic sanctions until they, until they can’t take anything else more way, then, then take any action to retaliate and all of a sudden it’s called a unilateral, unilateral attack. This is all lining up in a way that you’ve talked about on your show. It’s almost like you’ve seen this coming for a long time. What is your take on what’s happening right here?

Tyrel Ventura:                     Well, it is that classic playbook that we see over and over again, Mike. I mean when, when, when you look at it, it’s almost as if the Trump administration and the people in it are, are, you know, they, they can’t, they don’t understand that it’s not just three news stations anymore and the internet doesn’t exist. Because when you see this same set of standards repeated over and over, as you eloquently said earlier, and the fact that, you know, you throw the sanctions on the, on the country, then if they try to retaliate to those sanctions because of their people are starving, oh, we can say that’s aggression and now we can move our ships in and attack.

I mean, let’s remember that this battle, you know, this, this ship that these, that they’re sending over there with the attack planes that was scheduled to go over, that they had announced that a month ago, a month before Bolton ever came out and said that, you know, Tehran was escalating tensions and we need to send these battle cruisers over there and these, these warships over there to respond. This wasn’t a response.

This was something that was already on the books, that was due to happen a month earlier and was already announced by the navy that it was going to take place a month earlier, moving these ships back over to the Persian Gulf as part of their normal duties, as it were. You know, this is absolutely ridiculous and it’s, and it’s chicken hawks like Bolton who get up there and talk all day long about, oh, I don’t want war, but we’re going to set everything up and set all the dominoes up so that war could potentially happen. So we can look big and tough.

Mike Papantonio:             You know, Tyrel, as I watch Bolton with Venezuela, you almost saw the disaster coming. He tries to set up the coup, the coup doesn’t work. Now all of a sudden you got bigger problems in Venezuela. And so it’s almost as if he turns, he immediately turns his attention away from Venezuela and says, well, we got to kick somebody. So let’s, let’s go to Iran.

Look, Tehran announced this week, that it would restart some of it’s suspended nuclear activities to mark the year anniversary of the US departure from its commitments for, for it’s part, the Iranian regime isn’t taking Bolton’s bait yet. As far as I can see, they don’t seem to be taking that bait. What are you seeing here? Is this, does this give him another opportunity to just do something that a little bit unpredictable? Is what a lot of folks looking at this, say the thing that we can’t handle here is the unpredictable nature of leadership in Iran. What is your take on that?

Tyrel Ventura:                     Well, I mean Iran is in this tough predicament because at the end of the day, you know, as an outsider looking in at that country and seeing how they respond to this, you know, with the US kind of like you said, setting everything up for them to, you know, fail and, and, and, you know, justify US presence, justify, invasions, justify war. It puts Iran in a tough position because they want to be their own sovereign country and make their own decisions and, you know, and if we’re stacking the deck against them to where any little, any little twitch, any little move that suddenly Donald Trump and the boys don’t like, that puts them in a hard position to go about their regular business and being a country and being a sovereign country that’s not, you know, held underneath. You know, they don’t belong to us. It’s not our job to go over and tell them what they can or can’t do until they, until there’s actual proof that they’re a threat to the United States in a realistic way and not something that’s been propped up.

Is this a repeat of the same thing? Do we have, do we really have this issue with a, a nuclear threat in Iran? And, and you, you have to wonder as you’re watching this and it is whether it, does Trump want regime change in Iran or is he trying to strike a new deal with the new laws? It, it, it kind of makes you ask that question to some degree, isn’t it?

Tyrel Ventura:                     It does. Because, you know, this is kind of Trumps MO as I, you know, we saw him do this with North Korea. I’m going to, I’m going to stoke up and use a lot of rhetoric and get, you know, use a lot of fiery language and then suddenly they come to the table and everyone is trying to hammer out a deal and then he looks like the good guy. And plus he seems to just kind of want to redo everything that Obama did and just put his name on it, you know, so I mean, it could be that.

At the other hand, you also gotta look at it. The rest of the world could see it would be crazy for the United States, whether it’s in Venezuela or Iran or both at the same time. It’s crazy for us right now to be threatening and saber rattling when we can’t afford two wars at this point.

When you look at, when you really look at what the economy is doing here and you really look at what’s happening here state side, there’s no way that you can start two wars. One with Venezuela and then one with Iran and say, oh, we’re doing great. Because always remember war is failed politics at the end of the day.

If you take out the idea of that word, you know, they’re there to make money for the, for the defense contractors. But when you really look at it from a, you know, war is failed politics. If you couldn’t win politically, then you drop bombs on people. You know that, that, that’s the sad state of it and to me that’s a failure.