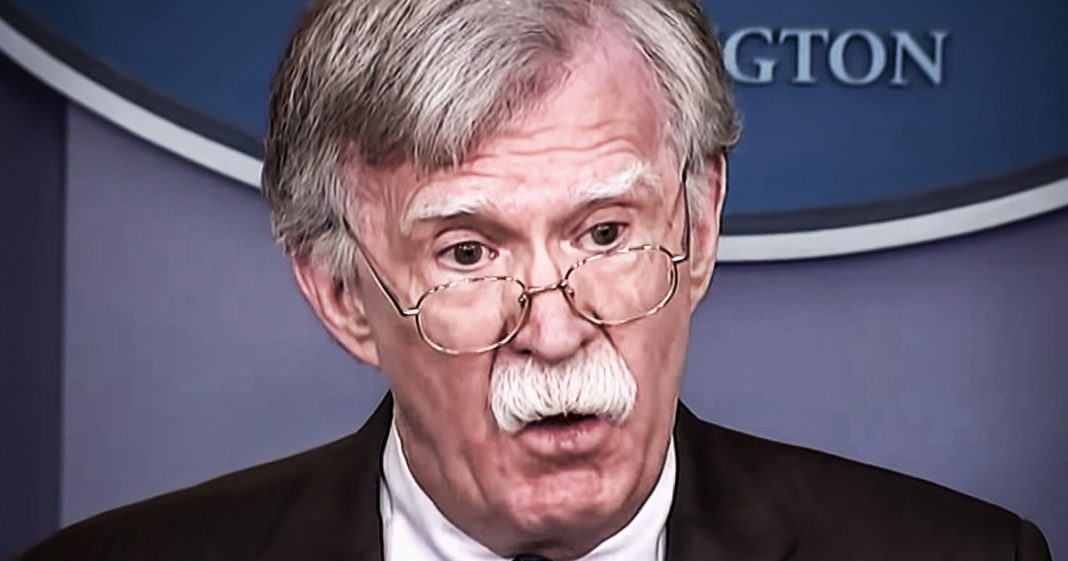 On Sunday evening, the US announced that they were sending warships over to monitor Iran, a dangerous move considering Iran has done absolutely nothing to warrant this aggression. John Bolton has always wanted to continue his forever wars in the Middle East, and Trump just happens to be clueless enough to let him go for it. Ring of Fire’s Farron Cousins explains what’s happening.

Well, most of the country has been a little bit distracted, you know, with the Mueller report, which is very big and important news. We’ve also been distracted with the 22 people running for president under the democratic banner. Also news that needs to be paid attention to, but unfortunately while did a tension has been divided basically between those two topics. We’ve missed a really big story that’s happened just in the last seven days and that big story is that John Bolton, Donald Trump’s national security advisor is about to push us into another unwinnable war in the Middle East. On Sunday evening it was announced that warship, a warship a along with bombers, was heading over to the Middle East. Are we a park at right near ran show that we would be ready according to John Bolton to use unrelenting force if a ran suddenly decides to attack one of their neighbors or attack the United States. Now Bolton, when he made this statement saying, we’re sending the show over there to use unrelenting force. If they attack anybody, there was no indication that a ran was going to attack anyone. They, they had not been provoking anyone in the Middle East. Essentially. You just kind of been sitting there quietly. Yes, they’ve got their problems,

but those problems weren’t exactly spilling over into other countries. Iran wasn’t out there sending out their own war ships are launching their fighter jets and just attacking people willy nilly. It wasn’t happening. But John Bolton made it seem like, oh, they’re about to folks. You just wait, listen to the mustache. It’ll tell you the truth. And the truth is John Bolton, once a war, John Bolton wanted a war in Venezuela because he thought that would be a little easier. I think last week kind of proved them wrong when the u s backed coup failed. So now he figures, you know what, what the hell? And again, okay, I got to back up a second because that’s even more important. I almost glossed over that. The US backed coup failed in Venezuela and then two days later we’re sending a war ship over Doran filled with bombers ready to go and use quote unrelenting force if needed because John Bolton got little pissy pants because he couldn’t win in Venezuela.

So we said, screw it, I’m going to a ran. That was important and I apologize for almost glossing over that. I’m also going to apologize that I seem a little excited about that, but I’m not. I’m angry because we have to understand what’s happening and I kind of just had the light bulb moment there and it is exciting when you have those, but it’s infuriating considering the topic here. John Bolton wants a war. John Bolton wants to kill people and dammit John Bolton’s gonna get it. That’s why we have that war ship sitting over there near Iran for no reason whatsoever. They’re lying to us already saying, oh, they’re going to attack people. No, they’re not. No, they’re not. But John Bolton doesn’t care if you believe that or not. He’s going to use that as his justification. It’s exactly what he did during the Bush administration. It is exactly what he’s doing now and the difference is he actually found a president who’s stupid enough to just go along with it.

This time in the past, he actually didn’t need a stupid president, even though we did have one with George W. Bush, don’t get me wrong, but he had Cheney and Rumsfeld and all the other war hawks there, and they were all on the same page. Bolton comes into this, administration realizes they may not all be ready for war, but they’re dumb enough to just let him do whatever the hell he wants. They’re dumb enough to listen to whatever it is he has to say, even when he’s lying through his teeth, and that is what Bolton is always wanted because he can tell Donald Trump anything and he knows that that man is stupid enough to believe it. The only question is, what is so wrong with John Bolton’s brain? Why is he such a disgusting figure that he is so desperate to start another unwinnable war in the Middle East? I think he would be a great candidate for psychologists, psychiatrists, to really take a deep dive into that psyche there and figure out what in the hell is wrong with this man because this is not normal behavior. These, these are acts of aggression being carried out by John Bolton. This man needs to be in a padded cell for the remainder of his days, observed by teams of professionals to figure out what the hell is wrong with him because this is not normal behavior. And unfortunately, working for a crazy man like Donald Trump, he has completely blind to the insanity of those around him. Like John Bolton.