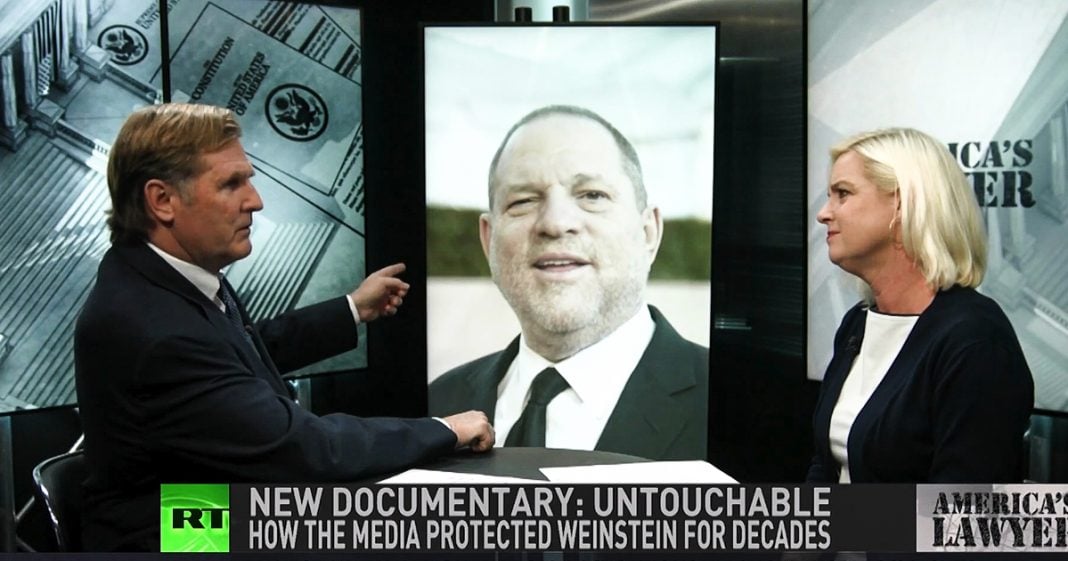 Via America’s Lawyer: Legal Journalist Mollye Barrows joins Mike Papantonio to talk about a new documentary about disgraced Hollywood film producer Harvey Weinstein, which highlights how the Media was enabling and protecting him.

Mike Papantonio:             A new documentary about disgraced Hollywood film producer Harvey Weinstein highlights not only his predatory behavior with young women, but also the people in the industry who enabled and protected him. You know, as I look at that picture, I’m going, really, this is, this is, this is the Casanova?

Mike Papantonio:             I mean, you walk into a room with this guy and unfortunately so many people did that. What’s the gist of this film?

Mollye Barrows:                Well, so there’s this new documentary of course that’s out talking about how basically Hollywood and the surrounding industry was just his hunting grounds and he was a legitimate predator. They interviewed some dozen women who essentially give the same story about how they, he promised them these amazing life changing career opportunities, but hey, you got to come talking about it, you know, at a meeting at my hotel and oh by the way, it’s up in my room. And then he forces himself on them and they’re either, they either acquiesced out of fear or physical fear for their safety or out of fear for being black balled or, you know, from the industry.

So it’s a, a predatory pattern. But they also highlight a couple of other things about the system that essentially enabled him, whether it was at Miramax and you had a few employees that would step forward and say, sure, we saw it, we knew it had a whole environment of harassment, but we didn’t want to lose our jobs. So we didn’t say much to a couple of the employees at Miramax who did speak up and talk about the atmosphere and they did officially lodge his complaints.

Mike Papantonio:             The extension is that you had a corporate media, MSNBC, NBC, ABC, CBS. They wouldn’t tell these stories either.

Mike Papantonio:             And because of this, it’s almost a fraternity, this corrupt little fraternity that we’re going to protect our own. And he of course was at the top of his game, you know, with the Tarantino movies. And he was just absolutely on top of his game. And then so, so the, the media industry itself charmed themselves into saying, no, we don’t, we don’t really believe this. Well, they did believe it. A, they knew about it. They’ve been told all the stories. The people that were telling the stories were completely credible, but they said, we’re not going to do this kind of for the same reason they say to an advertiser, you know, we’re not going to tell the story that’s going to hurt you.

Mollye Barrows:                Yeah, and we saw it again and again, didn’t we? With other high powered media figures, whether it was Roger Ailes, Charlie Rose or you just, you name it. They had other people around them that we’re protecting them from these allegations. But you know, as you and I have talked about before, as a reporter for many years in covering courts and crime and you did cover a lot of the same people and you did hear part of the whisper chain if you will, or the telephone game of who those people, allegations were behind the scenes that they were grabby or they shouldn’t be approached.

Or where they had reputation for being offensive. But there was never anybody that would come on the record and give their name or you know. So that was what this film brought to light was that there were a general knowledge within the media that these accusations existed. But there was a real resistance probably from people that were higher level and more empowered to really following up.

Some of the reporters, boots on the ground, including this one guy for The New Yorker, Ken Auletta, talked about 2002 profile he did of Weinstein where he was unable to include any abuse allegations that he had partially confirmed, he’d found a victim, but she didn’t want him to use her name, and then of course Weinstein denied the allegation. So it’s easy for the editor to say, okay, well we’re not going to follow through with it. But that’s what I thought was so brilliant about Ronan Farrow’s piece when he broke his story in The New Yorker.

Mollye Barrows:                Yes, and they, and you know, when you have a person who, even if they don’t want you to use their name, if they’re willing to take other legal steps that would ensure that what they’re telling you is to the best of their knowledge true, there are ways to tell this story. And what I feel like is great about this film, Untouchable, is that they highlighted how there was so much acquiescence and gave specific examples, not just with Mr. Auletta, but other, other incidents where Weinstein openly yelled a nasty word at a reporter at a party and then grabbed her journalist boyfriend in a headlock and punched him on top of the head. There were pictures of it, but supposedly these reporters never saw the pictures and it was never published.

Mike Papantonio:             Now your, your daughter, your sister, your mother has got to confront this person before they can get a job. They got to walk into a room with this, this character.

Mollye Barrows:                That’s gonna be an interesting story for us to follow too. I think because so much of the #metoo movement is tied up into whether he’s held accountable in law, but as you know, those are sticky cases, if you will. They’re not always easy to prove, so he’s facing five criminal charges right now that stem from allegations in 2006 of basically forcing himself on a woman and then 2013 a rape accusation of a woman in a hotel room. So there have been petitions. I think another charge has been charged before this had been dropped. So these are the ones that are moving forward.