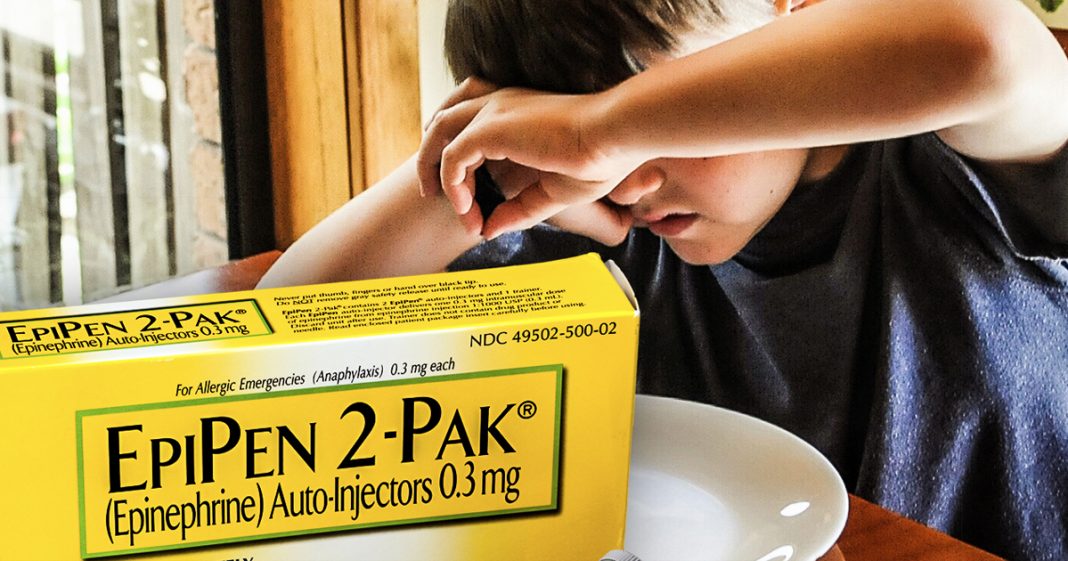 The United States pays the highest percentages in markups for prescription drugs than any other country on the planet. Even with health insurance, these prices can still sometimes be too high for the average American to be able to afford to take their medication. This has to change immediately, and we can’t settle for anything less than a complete overhaul of the healthcare system. Ring of Fire’s Farron Cousins discusses this.

A few days ago, I got a notification from CVS pharmacy letting me know that my daughter’s a prescription for her. A steroid asthma inhaler was ready for pickup. It is a 60 day supply, or excuse me, 60 puff supply mental last 30 days. One of the one puff in the morning, one puff in the evening. And the reason I’m telling you this story is because my daughter has to be on that inhaler in order to avoid some of the worst complications of her asthma. It’s pretty bad right now. Uh, for her age, CVS and notification let me know that that prescription was almost $400 for one month’s supply of her inhaler, nearly $400 I have health insurance. I have had health insurance through my employer for well over a decade now.

When I first started getting her this prescription three years ago, it was $50 a month and no, we had not met the deductible at the time. It was just $50 a month today, $400 a month. My own inhalers are $300 a month. EpiPens for my daughter and my son who both have peanut allergies, $650 a piece, and the kicker there is that they expire after nine months, so you’re guaranteed to basically always have to buy two per kid per year for a grand total. For those keeping count at home, $650 a piece, $1,300 a pop twice a year, $2,600 just on EpiPens that we pray we never even have to use. I’ve never had to use one. I throw them in the trash like I’m supposed to when they expire and that’s basically throwing money away. Now these are just me, my prescriptions for my family, and again, we have had health insurance.

My kids have had health insurance every single day of their lives. Millions of people in this country do not have health insurance show that $400 inhaler for me might be $700 for them. Maybe they can find a coupon, but here’s the kicker on a lot of coupons, and I don’t think people realize this, and I know because I’ve used them. That’s a one and done thing. Most of these coupons, if you read the fine print, they actually say that you can only use this once in your lifetime. Now it might be good for a full 12 months, but then after that you could never use it again ever. That’s how they rope you in. But the point is millions of people in this country, and I’m one of them, we can’t afford our, our, our prescription drugs. Even if we have health insurance. It is insane what’s happening with the pharmaceutical industry today. As we have pointed out, as brave members of Congress, including AOC, have pointed out, uh, we’re already paying for the development of these prescription drugs. The majority of the funding for prescription drug research and development actually comes from taxpayers in the forms of grants from the federal government. We’re already paying for them. We already paid for them. We made them okay and then they turn around and do this crap to us, charging us the highest percentage markups of any country on the planet. And they tell us, they lie to us and tell us that they have to do it because they have to recoup their cost of research and development.

The truth is they have to recoup their cost of advertising prior to lifting the ban on direct to consumer advertising, Americans did not pay these markups for prescription drugs. We simply didn’t. They didn’t exist back before insurance companies went sideways and started screwing people over. Any prescription you got would be $5 for generic, $10 for name brand because you were on a, uh, a copay system instead of a deductible system. Go to the doctor was $20 every time. Now, this wasn’t necessarily every single person, but it was most of them. But then insurance companies realized they could make more money putting you on the deductible system. Oh, we don’t pay a dime or we only pay 10% until you’ve paid $6,000 out of pocket. And then we’ll cover half. And then when you hit $9,000 out of pocket, then everything is free. But keep in mind, you have to pay $9,000 out of pocket after you’re all so paying $300 per month to have this. So you’re really paying $12,600 out of pocket and at that point, once you’ve paid that much, everything is free.

That is exactly what my current insurance plan is and I can only use myself as an example because I only know my numbers. I only know what my plan is, but I’m willing to bet I’m not the only one. And I do know that as a country, yes we pay higher markups than any one else. And at this point, given what we know about pharmaceutical markups and who actually pays for R and D and what they’re actually trying to get their money back for the advertising, given what we’ve seen from insurance companies, given the astronomical price of services from hospital corporations, there is one solution, only one solution and that is Medicare for All. That is the only thing we can do at this point. And for me personally in a presidential candidate for 2020 I will not accept anything less than that. That’s the bottom line. That’s the deal breaker. Do you support Medicare for All yes or no? If the answer is yes, great. We can continue the conversation. If the answer is no, thank you for your time. Have a good day. I wish you nothing but the best, but get out of my sight. That’s where we’re at as a country and I know I’m not the only one who feels that way.