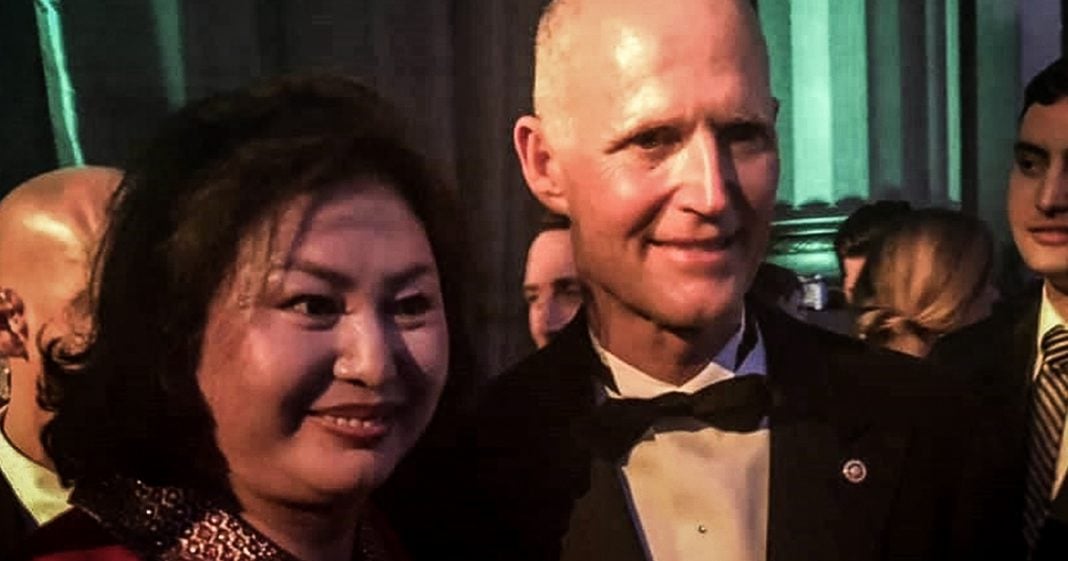 Li “Cindy” Yang, the woman who founded the massage parlors that were recently busted for providing “extra” services to male clients, is now under investigation by the FBI for her efforts to sell access to prominent Republicans, including Trump himself. Yang is close with many high profile Republicans, and she even watched the Super Bowl this year sitting right next to Donald Trump. Her antics have created serious security issues at Mar-a-Lago, and its about time the FBI decided to dig deeper into this. Ring of Fire’s Farron Cousins explains what’s happening.

The woman who founded the massage parlors that recently got busted for offering male clients, um, extra services, I guess you would call it a, although she doesn’t own them anymore. She didn’t own them when that happened, but she is the one who founded them. Woman by the name of Lee Cindy Yang here in the state of Florida is now under FBI investigation. But this investigation is actually not related to her connection with those, uh, massage parlors, which also happened to be the one where Robert Kraft was busted at. Now she’s being investigated for potentially illegal contributions to Donald Trump’s campaign’s. She’s also already under investigation for a potentially selling access to Donald Trump and other prominent conservatives here in the state of Florida, uh, to Chinese nationals.

We also know that the woman who recently infiltrated Mar a Lago attempting to install spyware was drawn there to Mar a Lago by Cindy Yang. So Cindy Yang is in a lot of trouble right now. Two different FBI investigations, but this most recent one only centers around her donations to Donald Trump’s campaign, his packs, his reelection, whatever it is, the FBI’s pretty positive that this woman has given way more money than she was legally allowed to do. Now, let’s be clear, this does not implicate Donald Trump in anything.

If this woman was giving extra money or illegal money, that’s not his problem. That’s her problem. But really isn’t it his problem though, isn’t it? The problem of every other conservative who’s been photographed with this woman? I mean, she took a Selfie of herself and Donald Trump watching the Superbowl together just this year. She has pictures of herself with Matt Gaetz, our new governor, Ron DeSantis, our new idiotic senator, Rick Scott. This woman knows pretty much every prominent Republican politician that comes through the great state of Florida, but it’s only the contributions to Trump, right? That’s the only time she was doing something questionable according to what we know about this investigation.

She also had one of her friends give a donation to Donald Trump’s campaigns and the uh, to the tune of $5,400 and she physically went over to the woman’s house and actually physically helped her write the check. So the FBI wants to know is there some kind of money laundering going here? Is this some kind of illegal campaign contributions scheme one the hell is Cindy Yang actually doing down here in the state of Florida. And I think that’s a question that a lot of us want answered, not just in the state of Florida could probably all over the country. This woman is connected again to every prominent Republican politician that this state has to offer. And apparently that DC has to offer in the form of Donald Trump. And of course his family, she’s been selling access to Maro Lago.

The fact that it’s taken so long for these investigations to really get off the ground, that’s also troublesome. I mean the FBI should have been looking into this a long time ago, especially when they found out that she was the one who founded the massage parlors that they had been investigating forever. Don’t you think it had been worthwhile to maybe just kind of look into what else she had going on? I mean, there are already investigating the other massage parlors that she does own because they believe that there’s some illegal prostitution happening there as well. But this woman is corrupt to the core and she’s also very chummy with every republican that we have to offer.

You know, my mother always told me, you judged by the company, you keep, you know, always seek out the, the good people to be your friends and good people to hang around with because you fall into the wrong crowd. People are gonna start thinking you’re just like them. Well guess what, Cindy Yang is the wrong crowd. Cindy Yang has likely broken the law on many different occasions here and yet she is hanging out with every republican willing to spend just a little bit of time with her or every republican that she’s given. Just a little bit of money too. You can’t separate the two. All of these Republican politicians who have their ugly, smiling faces in these pictures with Cindy Yang. I think these investigations need to extend to them as well.