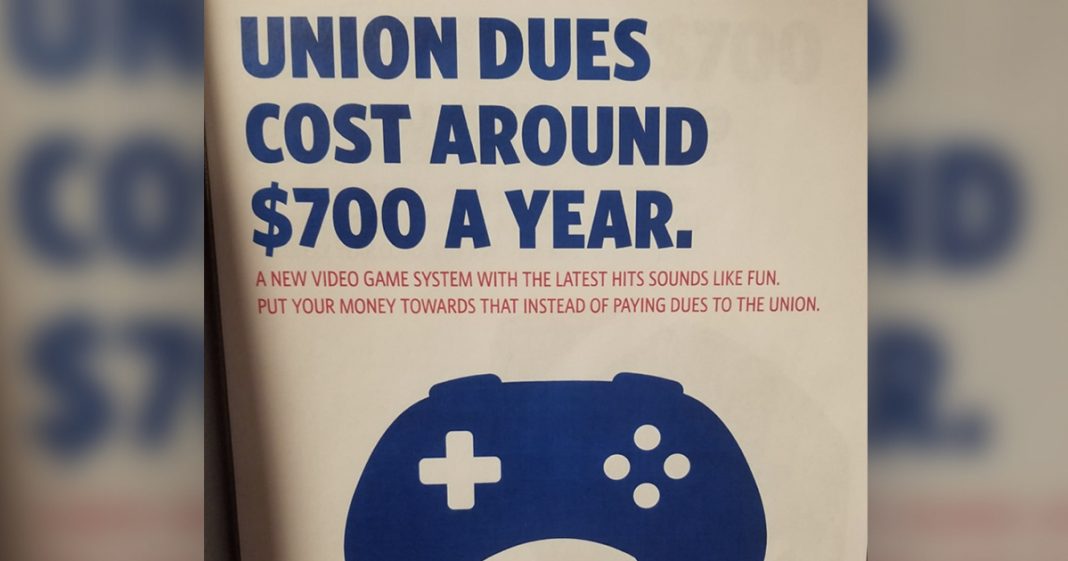 A photo from a Delta Airlines breakroom went viral this week after showing the world the kind of disgusting and insulting propaganda that the company was putting out in order to prevent workers from joining a union. Delta workers were told that they should just buy a video game console instead of joining a union, because clearly workers care more about gaming than they do decent healthcare, higher wages, and better overall benefits. Ring of Fire’s Farron Cousins explains what’s happening.

On Thursday of this week, a viral photo made its way around social media. The photo was actually taken in a Delta airlines break room and it showed a poster. You can see on the screen there, it says union dues costs around $700 a year. A new video game system with the latest hit. Sounds like fun. Put your money towards that instead of paying dues to the union because Delta employees who aren’t unionized would much rather sit in their living rooms playing a video game and you know, forgetting about the fact that they have crappy healthcare, that their hours are being cut for no good reason or that they’re not making enough money to keep themselves out of poverty. Yeah, a video game systems, totally going to make them forget all about that. This anti-union propaganda because that is what it is put out by Delta is not only disgusting, but it’s insulting to their own employees.

Now, for years, Delta employees, this does not include pilots. They already have a, you know, their union or dispatchers, they have a union, but the average employees, you know the people out there, they’re moving your luggage throughout their refueling, the plane. They’re doing all of this stuff for you to make sure you get from one place to another, that your luggage shows up there. And that everything in between is absolutely perfect for you. May Not always be perfect, but they do a pretty good job. Right? And all they’re saying, and they’ve been saying this for years, is that hey, you keep cutting back our hours. You’ve classified me as part time so that I can not get benefits so that I cannot work over a certain number of hours so that I’m ineligible for any kind of overtime. I want to work. I just want to be taken care of at the same time.

But you delta have screwed me out of that opportunity. Employees have repeatedly complained about the fact that the healthcare offered by this company is too costly and absolutely grossly inadequate and they want a union. But delta has engaged in one of the dirtiest, most deceitful anti-union efforts that we have seen in modern times, and let’s get one thing straight here. If you work for a company and that company is actively trying to tell you that unions are bad, then guess what? You work for a shitty company. Now that’s not to say you should go out and immediately quit your job. I know that’s not an option for pretty much anyone and I’m not advocating for that, but you need to know what you’re up against. If a corporation is telling you not to join a union, it’s probably a good indication that you actually need to join a union unions across the board, raise wages, increased benefits, and help the average workers.

But instead, instead of telling you that story, Delta is actually out there telling their employees that know it’s these rich fat cats running these unions. Really, I don’t see any union leaders out there today living in multi-million dollar mansions. What they’re doing is going out there on the picket lines and encouraging workers. They’re fighting in board rooms, trying to get people better benefits and better pay. They’re not in it for the money and they’re not even making a ton of money, by the way. Certainly not as much as a Delta CEO who, uh, just a year ago made $13 million in compensation. So the CEO gets $13 million in 2017, while at the same time telling his workers that, hey, wouldn’t you be much happier buying a new x box then, you know, being able to afford going to the doctor. Cause after all, isn’t that what all American workers want? We don’t want health care. We don’t want time off. We don’t want better pay. We just want the latest video games because we’re all a bunch of stupid morons who don’t know how to take care of ourselves. Or at least that’s what Delta thinks of us.