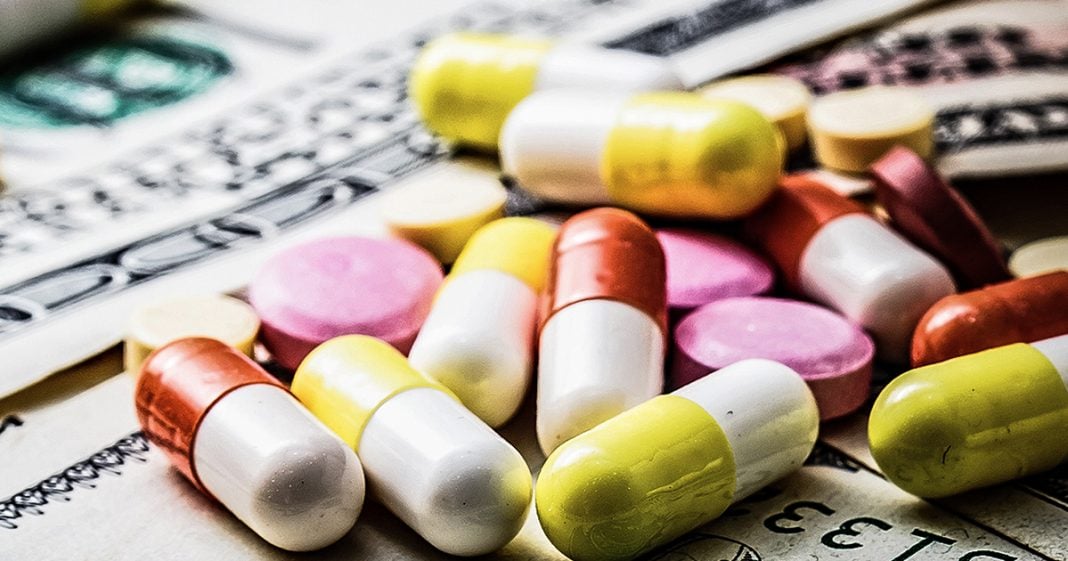 The public is angry about the soaring cost of prescription drugs in America. Politicians on both sides have finally decided that they have to do something about the problem, and now that it appears some form of action may be on the horizon, drug makers are starting to panic. In the past 12 months they have poured tens of millions of dollars into lobbying efforts to prevent legislative action, but all their money likely isn’t enough to stop the changes that are looming around the corner. Ring of Fire’s Farron Cousins discusses this.

Believe it or not, progress is actually being made in this country on the issue of overpriced pharmaceuticals. Just this week, Donald Trump signed an order that is now going to force pharmaceutical companies to reveal the price of their medication in their advertisements. Now, I would’ve much rather if he just signed an order saying you got to lower your prices, or if he signed an order saying that, uh, you can’t advertise to consumers anymore. But you know what? At this point we got to take every little victory that we get, even if it comes at the hands of Donald Trump. I know we don’t like him, but let’s be honest, this was a positive step forward. Just a magic pharmaceutical companies having to do their little thing. You see the real sad person moping around and the commercial like you always do, suddenly they get the wonder drug, they’re happy, they’re running outside with the kids and the dogs.

They’re barbecuing and then they’re going to have to slap that sticker price right on the end of it and suddenly that little pill that’s gonna make you happy and the perfect family man, you realize like, holy crap, that cost me $691 per month. I think I’m going to go without that and it’s absolutely going to devastate big Pharma. You have Democrats in Congress who are working on legislation that would either allow us to import drugs from other countries. It would allow us to negotiate drug prices. It would force drug companies to charge the United States the same kind of percentage of markup that they charge in other countries. Otherwise they’re not going to be eligible for Medicare. These are all democratic pieces of legislation that had been proposed since January 1st of this year alone. So Democrats are taking it seriously. Trump almost looks like he’s taking it seriously.

Republicans are kind of on the fence, but they’re leaning more towards, oh crap, we have to do something because poll show that this is actually one of the top issues for American voters. And that is why in recent months and recent year actually we have seen big Pharma ramp up their lobbying expenses to levels not seen since they were trying to kill the affordable care act before it became legislation. Right now we have the trade group, pharmaceutical research and manufacturers of America also known as Pharma. They’ve teamed up with seven drug companies. Those drug companies are a Abbvie, Astrazeneca Bristol Myers Squibb, Johnson and Johnson, Merkin Co, Pfizer and Sanofi, uh, all multibillion dollar companies. By the way, last year they spent $70 million just in lobbying just in lobbying, 2018 $70 million. The highest again was 2009 fighting the affordable care act when they spend 87 million. But so far this year, 2019 as more Americans get pissed off and as Congress is poised to take action on this, these are the expenditures numbers.

Abby’s laid out 2.6 $8 million for uh, this year. And the first three months, Astrazeneca has spent over a million Bristol Meyers over 1.2 million Johnson and Johnson, 1.4 6 million mark 2.7 6 million. Pfizer 4.2 million Sanafi 1.6 7 million. And the Pharma Group has already spent $10 million. So in total Pharma Group, and these seven Pharma companies have already spent $25 million in just the first three months of this year, January through March $25 million. So they are on track to spend more money lobbying congress than ever be for. And here’s why that’s important, because they see what’s on the horizon. Not only do they see the polls showing that Americans are pissed off, but they understand that things are changing in DC. And even Republicans are no longer willing to just blindly go to bat for the pharmaceutical industry because they understand that at this point in this country, likely because of those poles that’s political suicide, no muddy in Congress is smart enough to justify these astronomical big Pharma markups that American citizens are paying and when I say they’re not smart enough to justify it, it’s because they cannot in any way, shape or form con anyone in this country into thinking that those prices are fair.

The intelligence needed to do that simply does not exist. It doesn’t exist in human beings. I wasn’t trying to insult them. I’m just saying nobody would be able to convince anyone that that is good for them. The only people who think it’s good for them are the CEOs, the shareholders, you know the people who have a financial stake in raising these drug prices for us, everybody else, regardless of party affiliation, at least among the voters, we’re on the same page. This is a huge bipartisan issue that Congress should be working on and the Democrats are there just waiting for the Republicans to come on board. The legislation is ready to go and Donald Trump would likely sign it. This is one of the few issues where it seems like we can make some progress with him, so let’s strike while the iron is hot, the Democrats are onboard. Trump even appears to be on board Republicans. This is on you for once in your careers, do something to help the American public. Everyone is watching.