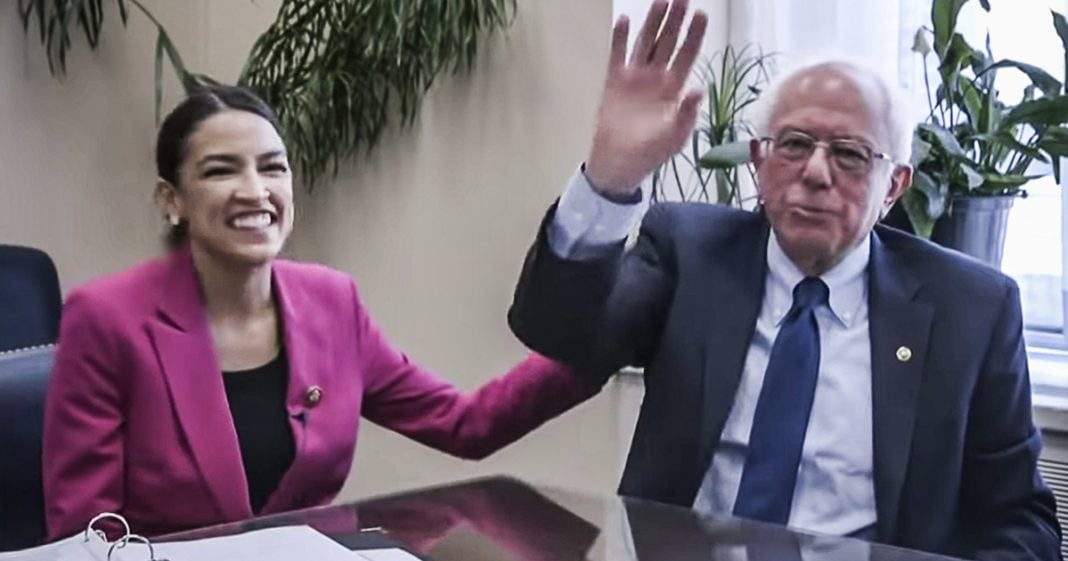 Representative Alexandria Ocasio-Cortez and Senator Bernie Sanders have teamed up on legislation that would cap credit card interest rates at 15%, possibly cutting in half the amount of interest that many card holders currently pay. This move has drawn the ire of Republicans and the banking industry, but that isn’t going to slow the momentum on this legislation that would provide relief to millions of Americans. Ring of Fire’s Farron Cousins discusses this.

On Thursday it was announced that representative Alexandria Ocasio-Cortez and Senator Bernie Sanders had teamed up basically forming a, you know, this political superstar team. They’ve teamed up and come up with legislation to take down Wall Street greed. Specifically. This legislation is going to cap credit card interest rates at 15% and among other things it would also help lay the foundation to create postal banking here in the United States. And it’s that second part actually the postal banking thing that is drawing a lot of criticism from Republicans. Now I’m going to get to that in just a moment, but let’s talk about the credit card interest rate problem we have in the United States today. Currently there is $1 trillion in credit card debt held among American citizens. You have a, we actually, the banking industry brought in 113 billion in interest and fees from credit cards just last year, which is up 35% from 2012 the 15% cap would actually be the same as the one congress imposed on credit unions in 1980 so this is not without precedent.

It is something Congress has done before and can do again. But when we have banks lending out, credit cards are these financial institutions, capital one chase, Bank of America, Mastercard, whoever they are, they’re making over a hundred billion dollars a year just on the interest, then yes, something’s wrong. And I know that’s a huge source of profits for them. And banks have to make money to stay in business, but consider this rates have been rising fastest for those with lowest credit scores here in the United States. Right now, the median interest rate is currently 21.36% as of last week. Um, but for borrowers with high credit scores, the average rate is 17.73% but a year ago that was actually 16.71% so we’ve gone up a full percentage point for people with great credit in the last 12 months. For those with poor credit scores, the average is now 24.99% whereas it was 23.77% just one year ago.

Interest rates are climbing astronomically even for people with good credit, and they want to cap this at 15% which is actually well below the average interest rate for people with awesome credit. So this is something it’s actually going to help everybody. You know, even people with a lot of money, people who make decent money. This isn’t just all we’re giving a handout to the port. No, this is, we’re going to help everyone across the board because that’s what we do as a country. Yes, it’s going to benefit low income people, people with bad credit scores a little bit more. But everybody deserves this. And you know why Bernie Sanders pointed this out because just a years ago, we handed those banks billions upon billions of our tax dollars to help them stay afloat. And now it’s time that they help us average American citizens stay afloat. That’s what needs to happen. It’s time for them to reciprocate. Oh, we did everything they wanted for so long. Well, guess what?

Time to pay up and you’re going to pay up in the form of reducing how much we pay. You’re still going to make billions upon billions of dollars in interest. It’s just not going to be as much as you were used to. Now onto the postal banking thing, as I mentioned, that is the one where a lot of conservatives who don’t know any better had been lashing out and they’re not lashing out at Bernie there. Instead choosing to go after AOC because I think going after her, you know, is low hanging fruit. You’ve got Dinesh D’Souza out there. The a former felon by the way, who says typical stupidity from AOC.

Dinesh D’Souza, by the way, is one of the dumbest human beings that anybody could ever encounter in life. AOC is not a stupid person. She is incredibly intelligent and I’m actually sick and tired of seeing Republicans try to tear her down by saying she’s stupid. She frightens them. She terrifies them because she is intelligent and on the issue of postal banking, we actually had it in the United States for roughly 50 years. Starting towards the beginning of the 20th century. Just fell out of favor wasn’t actually necessary as more bank spread a cost or across the country. But now that banks are consolidating, you know you got bigger banks gobbling up these smaller banks. Now it is necessary. You have every checking account under the sun. Now the charges you a monthly fee, low income Americans can’t afford that just to have a checking account. So they go without, if they want to send somebody a check or write a check, they’ve got to take their money to some kind of place where they can get a money order, a cashier’s check because they can’t afford checking.

And so AOC and Bernie wrote into this legislation, let’s do postal banking like we used to in this country. And more importantly, like a lot of western countries already do. But no Republicans would rather insult AOC call her names than actually address the problem because that is what is happening on social media right now. They have no actual argument. So instead they result to childish name calling, much like the president himself. There is nothing bad about this legislation that they put forward yesterday. And the biggest problem is that Republicans in Congress are going to vote it down just because they don’t like Bernie and AOC and of course, because they still want that money coming from the big banks.