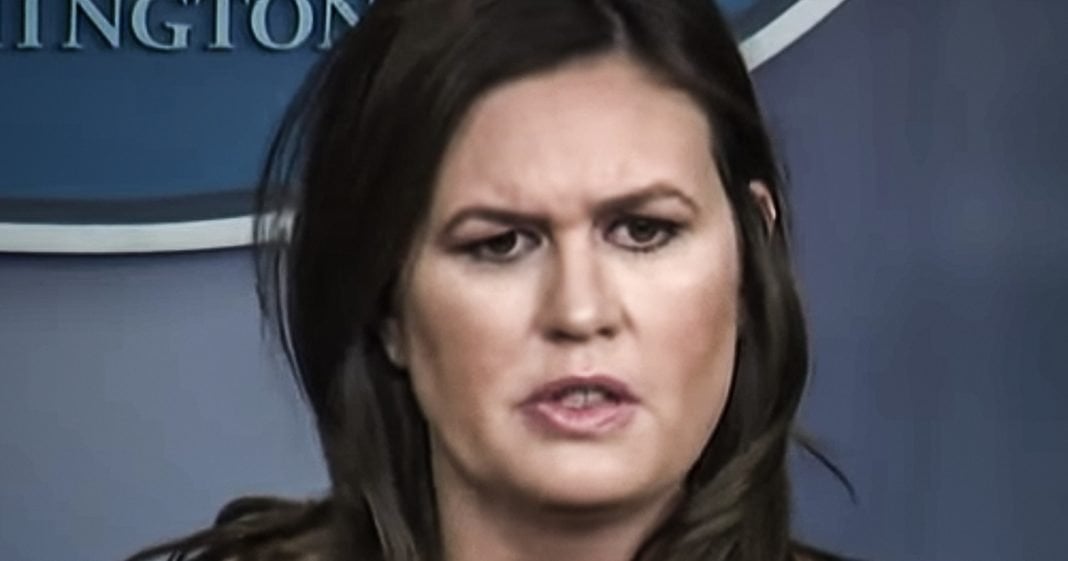 Sarah Huckabee Sanders long ago decided that she doesn’t like talking to reporters, even though that is literally supposed to be a part of her daily job duties, but it wasn’t until this week that she finally figured out how to put an end to that. Huckabee Sanders and the White House have now put a new set of rules in place that has already resulted in the revocation of press credentials for 21 reporters, some of whom have been covering the White House for decades. Ring of Fire’s Farron Cousins explains what’s happening.

While it has been I think a little over 50 days since Sarah Huckabee Sanders has done an official White House press conference. Uh, she’s actually going ahead and a thinning the herd a little bit, I guess you would call it of White House press reporters so that if she ever decides to do a press conference in the future, she’s only going to have to deal with about a half full room. And if she has her way, it’s only going to be people that are friendly to the president; probably just Breitbart, Fox News, Daily Wire, Daily Caller, Daily Moron, whatever they’re called. And those are going to be the people sitting in that room because Sarah Huckabee Sanders has already started purging real honest journalists from the White House press pool. This started happening yesterday when it was announced that a Huckabee Sanders in the White House came up with a new set of rules over who gets a White House press pass.

And if you want to be a part of that press pool, then guess what? You have to spend at least 90 out of the past 180 days at the White House. Yes. But 90 out of the previous 180 days every other day, essentially in that White House. And if you miss one day, if you’re 89 out of one 80, no press pass revoked. Sorry. Thanks for trying. The Washington Post and the Associated Press so far have been the hardest hit. Washington Post has lost seven people. AP is lost several more, but we do know right now that there’s about 21 total people who are having their press passes revoked. Unfortunately at the time of this recording, we don’t know who all of those other folks are going to be. One of them wash to posts. Dana Milbank, uh, Dana been covering presidents for decades for different administration. Decades press pass gone.

And that’s exactly what this White House wants to do. It is a continuation of their war on the press. This way by doing it this way, they can kick these people out and then when they report something about something Huckabee Sanders does or something, Trump does, the white house can fire back and say, well, what do you know? Your press pass was revoked because you couldn’t do your job, and then all the mega hats out, they’re going to say, oh, it’s a good point. They couldn’t even do their job. They’re not even allowed in the White House anymore because they were so bad. You just wait and see because I guarantee you that talking points is going to come up among the right, I guarantee you, because that’s what they do. They create a problem, they blame it on another group and then they go out there and say, look at how bad this problem was and this is the person to blame, even though they were the ones who created it to begin with.

This is an assault on the press coming from the White House and while I am no fan of the corporate media, and yes, Washington Post is corporate media as is New York Times and MSNBC, CNN, not fans of any of these groups. They do however, get it right more often than they get it wrong. They are not fake news. Fox is fake news. They just make stuff up and put it on the air. Breitbart, same thing, Daily Caller, Daily Wire, Zero Hedge, all of those fabrication sites, conspiracy theory websites, but those are the people that this administration wants to talk to. Those are the people that this administration thinks you’re doing a great job out there, but these, honest to goodness reporters, people who actually understand what journalism is supposed to be and would be doing better journalism if they’re corporate shareholders would let them, they deserve to be there because they’ve been there a hell of a lot longer than Sarah Huckabee Sanders has. And I can promise you they will be there waiting to return when she is forced to resign in disgrace because that’s also something that is eventually going to happen one way or another.