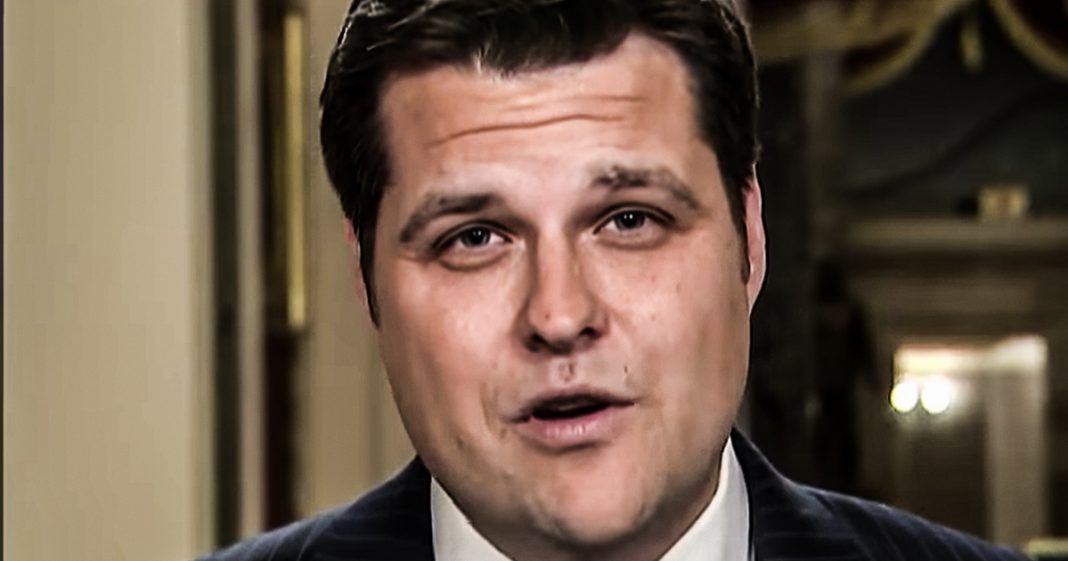 The Florida Bar Association has decided that Republican Representative Matt Gaetz can’t be let off the hook yet for his alleged witness tampering of Michael Cohen earlier this year, and they have decided to continue their investigation after determining that they need more information. This is bad news for Gaetz and certainly isn’t going to help with his political ambitions. Ring of Fire’s Farron Cousins discusses this.

Republican Representative Matt Gaetz is still not out of the woods with the investigation by the Florida bar. And in fact, the investigation, uh, just took another step forward. You see it at first when the Florida bar announced that they were going to be investigating Matt Gaetz for a potentially a witness tampering of Michael Cohen with a tweet before Cohen’s testimony, it was just kind of superficial. They’re like, well, we need to look at this and see that. We think it could be witness tampering. Do we think it’s just a stupid tweet by a stupid guy? And they basically decided this week, like, you know what? This wasn’t just a stupid tweet by a stupid guy. This was likely witness tampering. So we have to now move into phase two of this investigation. That’s bad news for Matt Gaetz because this investigation easily could have ended yesterday if they didn’t think there was any intent behind it. But that’s what they’re looking for now. They’re looking for that intent for the motivation. Did he seek to tamper with Michael Cohen’s testimony? And let’s, let’s go back to the tweet. Shall we hear? Is what Michael a, excuse me. Matt Gaetz tweeted right before Michael Cohen’s testimony the night before, he said, do your wife and father in law know about your girlfriends? Maybe tonight would be a good time for that chat. I wonder if she’ll remain faithful when you’re in prison. She’s about to learn a lot.

Now that tweet from Matt Gaetz obviously had nothing to do with Michael Cohen’s testimony. It wasn’t trying to, you know, call him out for something you thought he was going to say. All you were doing was essentially issuing this threat to him that you somehow knew he had all these girlfriends and that all this information was about to come out. It, it, it really read a lot like, uh, like blackmail. If you ask me. And if you ask most people who paid attention at the time, so of course Matt Gaetz doing the Matt Gaetz thing decides, Oh, I got to delete the tweet. I got a, you know, issue an apology. So here’s the fricking apology, this idiot issued. He said, while it is important to create context around the testimony of liars like Michael Cohen, it was not my intent to threaten as some believe I did. I’m deleting the tweet and I should have chosen words that better showed my intent. I’m sorry.

While it is important to create Tom Context around the testimony of liars like Michael Cohen, you already started your apology with yet another attack on Michael Cohen. How are you going to say this is not your intent. Michael Cohen was best buddies with the guy that you’re now trying to be best buds with Donald Trump for 20 years and you’re pissed off because you thought at the time he was going to come in there and spill all the beans about your new found best friend, which he did, and those beans have now led to more investigations. It’s now led to a subpoena against Donny Jr. And that’s what you wanted to prevent. That’s what you wanted to not happen. You also showed up to the hearing even though you weren’t a part of the committee. Not necessarily uncommon, but certainly not something you had to do. You wanted to see, you wanted to know what was going to happen even though it didn’t pertain to anything in particular that you were working on.

So it is a little odd. I don’t think the Florida Bar’s going to struggle whatsoever to find intent with Matt Gaetz. Tweet question is, is it going to affect his reelection? And I would have to say that 100% yes, it would impact his reelection if he were literally running in any other district in this country other than the one that I am currently sitting in because man, wow, I like where I live. I don’t love it. I like it. I would love it if we didn’t have so many people who are just clinging to the republican brand just to cling to the Republican brand because that’s the problem with this area. We have been consistently voting for Republicans since JFK. That’s how bad it is here. That’s how red it is. Here has not voted for a Democrat since JFK, and there’s just kind of stuck with it and I think a lot of them, obviously Fox News viewers, you walk into any bar or restaurant around here, you’re probably gonna see Fox News on the TV.

You see a lot of the Trump bumper stickers, she the MAGA hats. You see the confederate flags flying around in the back of trucks, if that gives you any idea of what we’re dealing with down here. But it is changing slowly. It is changing. But for right now, I don’t even think that if he were to get disbarred, it would affect Matt Gaetz in this district. It will, however, greatly affect any chance Matt Gaetz has of trying to move beyond this district. A Senate run, a governorship. Presidential run. Yeah. You get disbarred for witness tampering because of a tweet you sent. I seriously doubt that’s going to work out in your favor. If you ever tried to escape Florida’s first district.