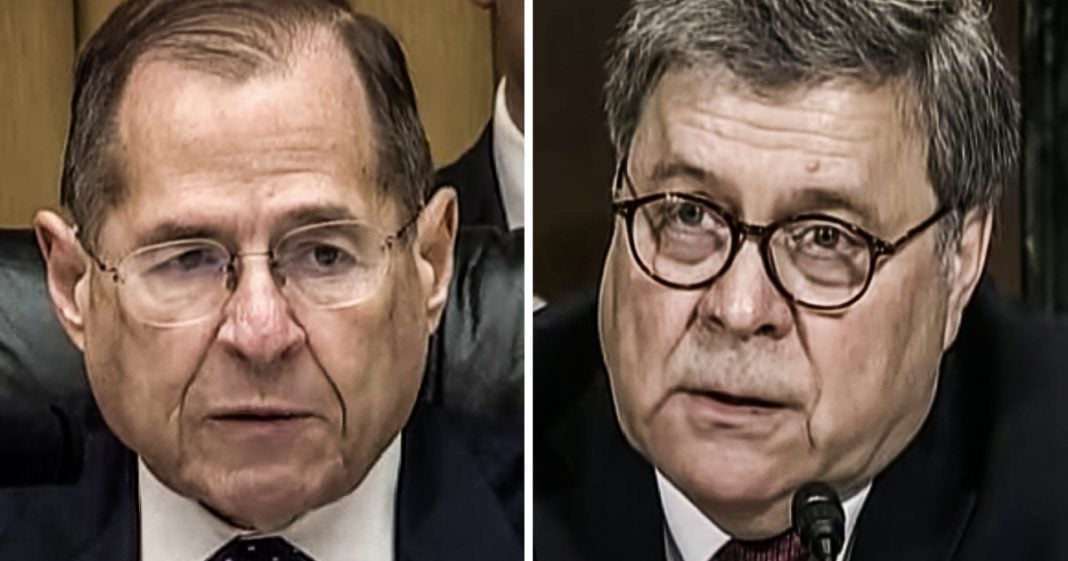 The House Judiciary Committee voted on Wednesday to hold Attorney General William Barr in contempt of Congress over his continued refusal to comply with requests from the House. The contempt charges will go to a full House vote, though it has not been made clear when this will happen. Meanwhile, Trump exerted executive privilege over the full, unredacted Mueller Report, setting up yet another showdown. Ring of Fire’s Farron Cousins explains what’s happening.

So yesterday was a bit of a big day, I guess for a testing the United States constitution. First we had Donald Trump who invoked executive privilege to prevent the full unredacted Mueller report from ever seeing the light of day. And then you had William Barr, the attorney general who actually asked the White House to intervene in this case who was held in contempt or at least voted to be held in contempt by the House Judiciary Committee. Now officially bar has not yet technically been held in contempt. They just voted to move forward with it. So eventually that contempt vote is going to have to go before the entire House of Representatives to be voted on at that point if it passes, which it would then bar would officially be held in contempt. That may not ever happen though. What’s more likely to happen now, especially since the president has claimed executive privilege over this report that allegedly completely exonerates him is the Democrats are going to have to file a lawsuit to get this thing released and depending on whether or not they can get this case expedited, we still may not even have a resolution to that lawsuit until after Trump’s already out of office.

At which point the next president would likely go ahead and release it anyway. This is basically between a rock and a hard place right now because yes, the constitution is being strained to its Max right now. Democrats, to their credit finally did the right thing by holding this contempt vote for Barr and Trump, as usual, ignores the rule of law, tries to block this report, which again, he claims completely exonerates him. Yeah. This man is fighting tooth and nail to prevent anyone in the public or in Congress or anyone that he doesn’t like. From being able to see the full thing. Now, according to the White House, Trump is the one who’s going to go through him personally read this 400 plus page report, which we already know that won’t happen to determine if it’s safe to release it to the public. So basically what they’re going to do is hand Donald Trump the unredacted report and say, go ahead and take out whatever parts you don’t want them to see.

That’s what’s going to happen. Now, of course that is, assuming Donald Trump even gets around to ever doing that, which I seriously doubt would ever happen. But again, I want to commend the Democrats, you know, for a very long time we have been talking about the fact that they’re too quick to rollover. They’re not fighters. Well, yesterday they fought, they fought hard and they did exactly what they should have done a long time ago. So I am proud of them. I do commend them for that and I hope that we’ve seen more of this fighting spirit from the Democrats in the months ahead because things not going to get better at this point. Things are in fact going to get much worse. This administration has shown us, especially in the recent weeks, that they don’t care about the rule of law. They don’t mind ignoring subpoenas. They don’t mind ignoring requests for documents.

They think they are above that and they’re not. These are co-equal branches of government. The executive and the legislative co-equal means means they have the, you know, not one is above the other, and yet here we have Donald Trump thinking that he can get away with anything and that he doesn’t have to answer to anybody, but that’s not how the constitution was written. That’s not how our government was broken up when this country was founded. That’s not how any of this works and he’s going to find that out the hard way because he has a very slim chance of being successful in ignoring these subpoenas. The only chance, in fact, that he has of being successful is if these get held up in court for years and he can just essentially wait it out till the end of his presidency, which hopefully would be 2020 but there’s a good chance it may end up being 2024 either way, Democrats are doing the good thing now, Donald Trump continues to do the bad thing, and I hope the Democrats decide that the lawsuit alone is not going to be good enough, but that they need to bring the full house in for a contempt vote, hold William Barr and contempt, and then if they still don’t get that report from him, go ahead and start impeachment proceedings now.