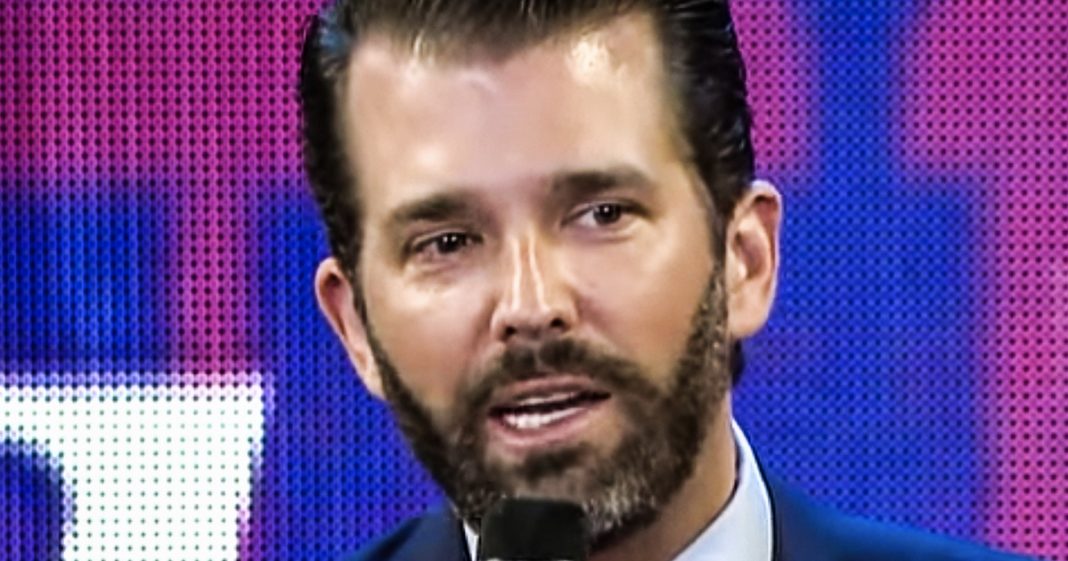 Donald Trump, Jr. will be forced to answer more questions from the Senate about his Russian contacts, after the recent testimony of Michael Cohen showed that Junior might be lying about the Trump Tower Moscow project. This is an important development considering the fact that the Senate Intelligence Committee that issued the subpoena to Junior is controlled by Republicans. Ring of Fire’s Farron Cousins explains what’s happening.

You know, while we were a kind of a namerd yesterday with the whole Trump executive privilege, and Barr being held in contempt, uh, another story came out that is equally as important as those and it didn’t start gaining traction until yesterday evening. But that’s the story of Donald Trump Jr. who is now been subpoenaed by a Senate committee to come back and basically have a chance to clarify your testimony because we believe that you lied to us and which has her thing about this is that the Senate intelligence committee, they’re the ones who issued the subpoena. Uh, it’s controlled by Republicans as is the entire Senate. Therefore, every Senate committee is controlled by Republicans. So the Republicans on the Senate Intelligence Committee obviously thought Donald Trump Jr. lied to them back in 2017. So they want to pull him back in and give him the opportunity to either admit that you lied or maybe fix your story or help maybe even just doubled down on your lie.

And obviously this pissed off Donald Trump and Donald Trump, Jr., uh, Trump Jr. issued a statement, a, somebody close to him, set it to the daily wire, uh, said, oh, these so called Republican. So he’s attacking the Republicans on the committee. Uh, reports say that Donald Trump’s senior is panicking about this because they’re going after his son and his son knows a little too much, which is ironic for a man who doesn’t seem to know much of anything at all. But nonetheless, the Trump family is very terrified about what this could mean now as to the reason why they issued the subpoena in the first place is because when they had Donald Trump Jr. in there originally in 2017, uh, they asked him about the Trump Tower in Moscow project and he basically played dummies. Like, I don’t know much of anything about that at all. I mean, maybe it was like a week or two.

I was involved with it. And that’s about it. Now keep in mind, that’s actually almost an exact quote from Donald Trump Jr.. And then we had Michael Cohen’s testimony a couple of weeks ago to the House of Representatives where he said, oh, no, no, no, no, no. All of these people, including Don Jr., and Ivanka, they knew about this because I briefed him on it at least 10 times. They were all heavily involved in this. They knew everything about it. And if Cohen is telling the truth there, then that means that Donald Trump Jr. was not. And if you, if you lie under oath to a congressional committee, they can go ahead and pop you for perjury their buddy. And that might happen. Considering that these Republicans on this committee actually had the courage to go after the president’s son with the subpoena. Yeah, I wouldn’t put it past him to go ahead and pop you if they find out you’re lying.

And that’s why Trump Jr. is so afraid. Yeah. Michael Cohen lied to Congress on long time ago, but this past, uh, testimony, he had nothing left to lose the first 20. He was trying to protect himself, but this one, he knew it was all over, knew he was going to prison. And there was nothing he could do to get out of it. He knew he wasn’t going to get a presidential pardon, so he let it all out and he is the man who knew everything. Now that’s not to say that he was a hundred percent honest. He may have been 100% dishonest, but nonetheless, the Senate wants answers and they want answers from Donald Trump Jr. they know a lot more about the Trump Tower Moscow project now, and they want to see if what Donald junior is going to tell them matches up with the evidence that they have. And if it doesn’t, it’s going to be real bad news for the president’s son.