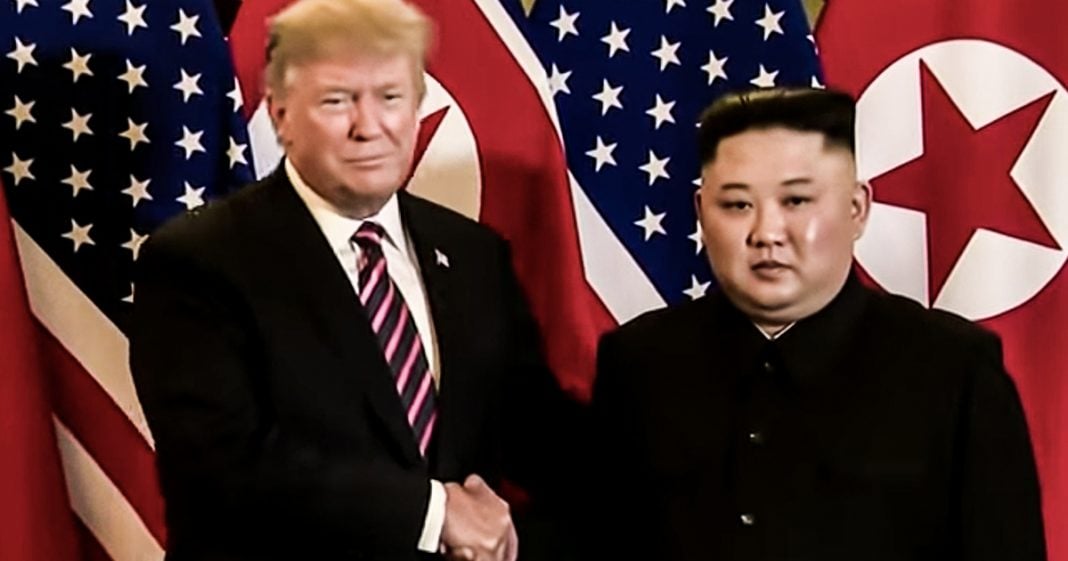 North Korea is now testing out new short range ballistic missiles, something that we were led to believe was going to stop because Donald Trump was such an expert negotiator. The truth is that Trump has no idea what he is doing, and rather than fixing the threats from North Korea he has actually made them so much worse. Ring of Fire’s Farron Cousins discusses this.

In recent weeks, we found out that Donald Trump has really bad at business from obviously New York Times releasing a few years of his, uh, tax return information. Uh, we’ve learned that he doesn’t understand how the economy works given the fact that his trade wars are absolutely devastating American consumers. And we also found out this past weekend that he’s also a really, really, really bad negotiator when it comes to foreign policy. Now, don’t get me wrong, most of us knew that in most of us have been saying that since the very first time he sat down with Kim Jong On. But this past Saturday, North Korea successfully tested a short range ballistic missile, North Korea as all the intelligence shows, as news reports have shown is still testing missiles. They, they’ve actually ramped up their facilities where it is believed their nuclear weapons are being developed.

All of that was supposed to actually stop after Donald Trump had that very first sit down meeting with Kim Jong On. And none of it has not one single bit, nothing has changed ever since. Are very stable. Genius expert negotiator in the White House sat down with the mad man from North Korea. Nothing’s changed, and yet he tells us constantly that it has. In fact, Saturday after the missile test, Donald Trump said on Twitter, he said to Kim, Jong Un knows that I’m with him and does not want to break his promise me he knows I’m with him. What the hell does that even mean? You’re with him. You’re supposed to be with America, right, but you’re not. You’re chasing dollars is what you’re doing in anyone who thinks otherwise is lying to themselves. Think about the language Donald Trump has used. Go back to that very first meeting he had with Kim and what he said on Twitter repeatedly since then, and even in press conferences and talking with reporters every time he’s talked about the beautiful investment opportunities in North Korea, the beautiful real estate.

This jackass wants to go over there and start building condos and hotels. That’s what he wants. He is in it for himself and he knows that he’s playing the long game here. He wants to go over there, buy up as much real estate as he can because he knows it’s going to be dirt cheap. Lift sanctions against the country, lift restrictions against the country under false pretenses telling us that Kim Jong on and North Korea are not doing anything bad anymore. Open up travel over there so that American citizens in, anyone from around the world can go and stay in the new Trump tower. Pyongyang. That is what he wants. His language has betrayed because we see it clear as day when all you talk about are the investment opportunities over there and you ignore the fact that they’re still launching missiles, that they’re still testing missiles, that they’re still building these things that they swore they weren’t going to build anymore and you telling us they’re not going to build them anymore. Yeah. We see what you’re about and you’re not about the safety and security of American citizens or any citizens around the globe. The only thing this president cares about is how much money he can make when he’s finally able to start building Trump branded buildings over in North Korea.