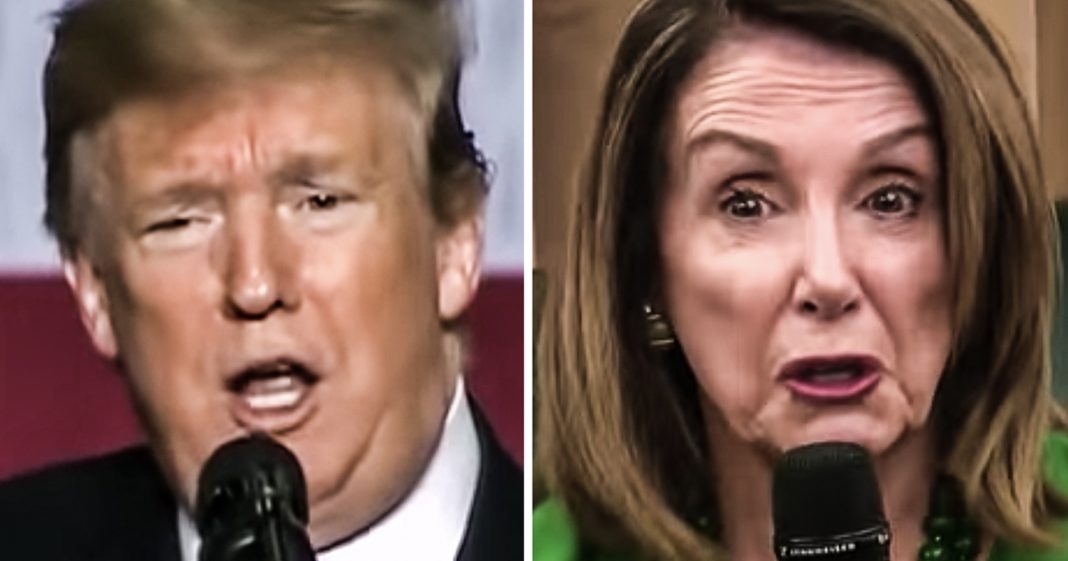 Democratic House Speaker Nancy Pelosi said on Tuesday that Donald Trump is almost goading the Democrats into impeaching him. The only question at this point then is why hasn’t Pelosi started those preceding? The President feels invincible and that he is above the law, as do other members of his administration, and the House of Representatives has the power to put an end to this right now, as Ring of Fire’s Farron Cousins explains.

At this point, I feel like the only person who’s actually not taking the issue of impeachment seriously is Nancy Pelosi, the Democratic Speaker of the House of Representatives herself. Now, yesterday, Nancy Pelosi said that Donald Trump appears to be goading us into impeaching him, and she said this in response to the fact that so many members of his administration have refused to comply with congressional subpoenas and congressional requests for records. We have a Cipollini who told Don McGahn that no, you are not going to comply with a subpoena for your testimony. McGahn’s testimony is of a great importance to figuring out a little bit more of what’s in that Mauler report and what it actually meant because McGahn spent so much time working with Robert Mueller, but White House specifically Cipollini again says, nope, not going to happen. I am telling him to not comply with this subpoena. On Monday, Steven Mnuchin, treasury secretary says, I know you’ve subpoenaed me for Donald Trump’s tax records, but I’m not going to comply. You can’t have those tax returns. What are you going to do about it?

Okay, well there’s, there’s lots actually that can be done. Oh, and not to mention the fact that the DOJ has denied multiple requests were ignored. Multiple requests, I guess for the full unredacted Mueller report from two separate House committees that all have the authority to request these things and the authority to actually get their hands on them. Same thing with Donald Trump’s tax returns and same thing with McGahn’s testimony that they subpoenaed him for any one of these people, whether it’s William Barr at the DOJ Cipollini in the actual White House or Mnuchin over at the treasury, all of them could be held in contempt right now. Absolutely. 100% right this second. They could send the sergeant at arms from the House of Representatives to go when actually arrest them and put them in the holding cell that they have until they comply. They have the authority to do that because they had the authority to issue the subpoenas to request the documents and get their hands on them. It doesn’t matter what Trump says or what his White House tells these other people to do. The House has that authority to get their hands on it, to request it to see it. They can do that. That is their power. The White House, on the other hand, does not have the power to deny these requests, and yet they are in here. We have below. So you telling us, Oh man, this guy seems like he wants to be impeached. So do it. It’s that simple. Do it. You have more than enough evidence. You even pointed out on Tuesday, Nancy, that one of the articles of impeachment against Richard Nixon was refusing to comply with congressional subpoenas. You said that so no, it time’s up on this issue. Right?

We can all agree right now that even regardless of all the crap in the Mueller report, what the president is doing right now shows that he believes he is above the law. He is ignoring the law and the Democrats in the House of Representatives have full authority to do something about it. They can do something about minutia and they can do something about bar. They can do something about Cipollini and yet they’re not. At least right now. That may change. Hell, it may change by the end of the day, but the public’s getting pissed, Democrats in the House that are not Nancy Pelosi are starting to get pissed and she’s going to have to listen to all of us. I know she wants to play it diplomatically. I know she is in a leadership position and it probably looks a little different from her point of view and her perspective and I get that and I respect that, but how much more are you going to take? How many more times are you going to let them just completely roll over you before you say, enough is enough. Nancy Pelosi is a tough person. Well, right now she is not showing it. Maybe she’s saving it for some kind of grand moment, but that grand moment needs to happen right now. This administration needs to be held accountable and they all, every last one of them need to be shown that none of them are above the law. And Nancy Pelosi right now is the one person who is capable of doing it. So please for the love of God, just do it.