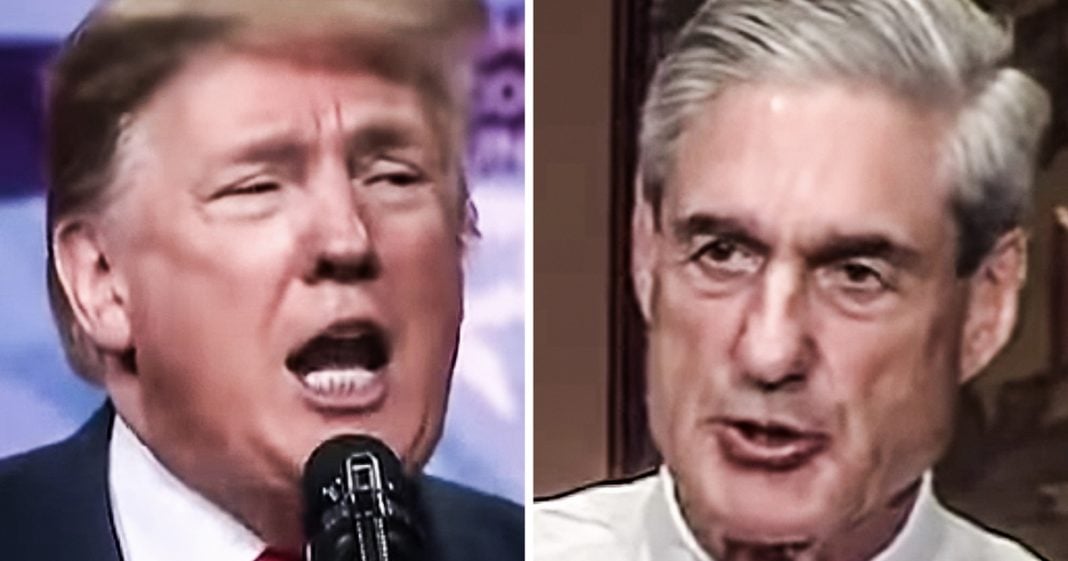 Donald Trump has always been the kind of guy who has trouble hiding his emotions, and his panic over the upcoming testimony of special prosecutor Robert Mueller is on full display. The man who says that he has been completed exonerated is apparently worried that the man who allegedly exonerated him won’t be kind during an interrogation. Ring of Fire’s Farron Cousins explains what’s going on.

So in case you haven’t noticed, Donald Trump’s been freaking out a little bit more than usual the last few days on Twitter. And one of the reasons he’s freaking out so much is because a tentative date has been set of May 15th for Robert Mueller to finally testify before Congress about what is actually in the Muller report at Trump’s not too happy about it. He’s been tweeting out nonstop, uh, basically trying to stop Muller from testifying before he even starts. His lawyers are having to tell him, you can’t do that, not just because of the bad optics, but because you actually don’t even have the authority to do that. There’s literally nothing you can do to stop this. You need to just let it go. Uh, Bernie Sanders has taken some shots at Trump over trying to block Muller from testifying saying, you are not a dictator. Again, basically nothing you can do about this.

But Trump thinks he is a dictator and that’s why he’s pissed off right now. He’s also pissed off because he doesn’t want Muller going in there and saying, Oh yeah, I thought for certain that Barb was gonna pop him on obstruction. But I guess not, but maybe you guys can do that. Huh? How about we get that working? The point is we don’t know what Mueller is going to say. Molar may come in and say, Hey, yeah, I disagreed with the bars framing of it, but as overall, you know, theme was correct. So who knows? We’ll see. I don’t think he’s going to say that about bar, especially given the fact that he had to, uh, let them know earlier that he wasn’t happy with his summary and the conclusions that he jumped to without ever actually looking at the evidence. But back to the big guy, right back to Donald Trump, the guy who’s panicking on Twitter, the guy who tweeted out on Sunday after spending more than $35 million over a two year period, interviewing 500 people using 18 Trump hating angry democrats and 49 FBI agents, all culminating in a more than 400 page report showing no collusion.

Why would the Democrats in Congress now need Robert Mueller to testify? Are they looking for a Redo? Because they hated seeing the strong no collusion conclusion. There was no crime except on the other side, incredibly not covered by the report and no obstruction. Bob Muller should not testify, no reduced for the dems. There was obstruction though. He outlined at least 10 different instances where you obstructed justice. He just wasn’t sure based on the decades old DOJ memo about not indicting a sitting president, he wasn’t sure how to handle that, so he turned it over to people with a little more knowledge of the law than what he has in that specific instance. It’s not saying Robert Muller doesn’t understand the law, but this was a complicated situation that few people fully grasp and he thought, hey, how about you guys deal with this? I’m out. It’s been a fun two years.

Trumps panicking because he understands that this report did not clear the way he said that it has cleared him. Yeah. It may have come to the conclusion that there was no collusion, but it also said that he couldn’t come to the no collusion conclusion conclusively because so many members of the Trump administration and former members of the Trump campaign actually lied to him. So much so that it hindered the investigation and he was unable to really come to any farm conclusion one way or another. But even that doesn’t technically matter. The obstruction of justice is the big thing here. And that’s what Democrats in Congress need answers on. And that to me is one of the things that Donald Trump damn sure doesn’t want them to get answers on because he understands that Congress is 100% in a position of power over him. If it turns out he did in fact obstruct justice.