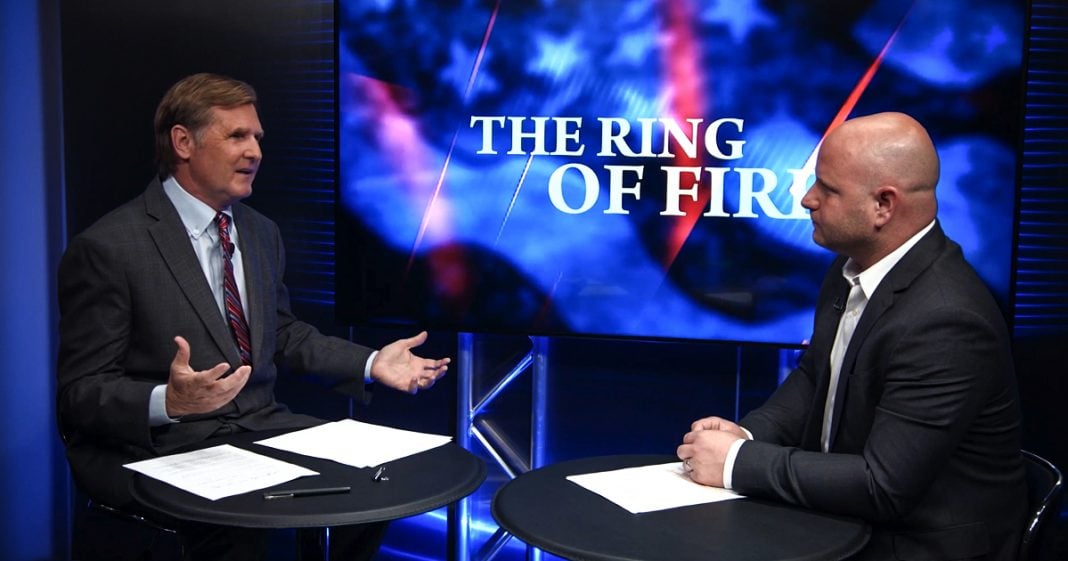 The Federal Election Commission decided to do absolutely nothing about the growing threat of foreign money in American political campaigns. Ring of Fire’s Mike Papantonio and Farron Cousins discuss this.

Mike Papantonio:             The Federal Election Commission decided to do absolutely nothing about the growing threat of foreign money in American political campaigns. Okay. Now let’s set this up a little bit. We know, because there’s so many sites that tell us where the money comes from. You, you use them all the time when you’re writing your stories.

Mike Papantonio:             Oh yeah. I mean, Saudi Arabia of all dictatorships, it is one of the worst in the world. So we’ve got all this money coming in and so a couple of folks on the, on, on, on, on the board, say, Federal Election Commission say, you know, maybe we outta interfere with that a little bit. And of course what happens?

Farron Cousins:                  They voted party lines in this case. And, and here’s what the rule was that they actually voted down. It was whether or not super PACs had to state if they had taken foreign money. It wasn’t even necessarily outlawing foreign money or saying how much it was, did you take foreign money? Yes or no. Which is illegal. It is illegal still in this country to take foreign money from any kind of foreign country, whatever it is, and use it for election purposes.

Mike Papantonio:             Well it used to be. I mean, on the books, it is illegal. But in an actual operation, the money that comes in from, from the Mideast, from Saudi Arabia, from, you know, these folks that really, they know what they’re buying. They’re buying Republicans and Democrats, you know, interestingly enough the, right now there are six people that could head the, the FEC. There are only four appointed. What’s the hold up?

Farron Cousins:                  Well, I, I think at this point, the Trump administration are actually not a nominating or appointing any people.

Mike Papantonio:             Why, why would they not do that? I mean, you know, you got Trump who looks for every advantage he can get. Why, why would we have those two extra seats just sitting there for the FEC? I, I looked at that and I, I scratched my head.

Farron Cousins:                  Incompetent. He’s surrounded himself by people who just like him, they have no political experience, so they don’t know what to do or how to do things or how to vet people. We know that. And so I think it’s just one of those things, it’s kind of fallen by the wayside. He’s got other things he wants to do. He wants to tweet and do whatever. So He’s, he’s ignoring this. But we, you and I had actually talked years ago, this was long before, probably even the 2014 midterm elections.

We did this story about how Saudi Arabia was pumping money into the US Chamber of Commerce who was then using that to fund elections here in the United States. So this issue of foreign money is something that has been going on a long, long time in this country. A lot of it from Saudi Arabia in the Middle East, but I have to, I got to say, I mean this story here, which is a decent enough story, but I swear every paragraph mentions Russia. It mentions Russia when we’ve got Saudi Arabia, other Middle Eastern countries.

Mike Papantonio:             Well that’s what’s happened. We’ve become, the corporate media has become so myopic on two stories. I hate Trump and Russia and the two go hand in hand and if you watch the nightly news, whether it’s MSNBC or CNN, they don’t even talk about stories like this anymore. I mean there, there are no stories that anybody really talks about and if they do, they don’t understand, don’t even, they don’t even explore all the ramifications.

It’s almost as if you have an entire generation of journalists coming up during this time where it’s that myopic focus that’s killing the journalist’s ability to be able to properly analyze a story. Yeah, I saw Russia too, no mention of Saudi Arabia. It’s the money from Saudi Arabia is overwhelming.

Farron Cousins:                  I mean, look, you, you can’t, you can’t take yourself seriously as a journalist, a pundit or whatever, if you’re not willing to address the fact that this issue was going on long before anything with the Russia story, whatever…

Mike Papantonio:             Yeah, Truthout usually gets it, you know, at least they, they, they, they, they typically are objective and they say, okay, there’s something really important here and that is this new relationship that we have with Saudi Arabia, this new love affair. And instead they take the easy way out and they Russia.

Well, the money is, there’s not even a comparison. There’s no way, no comparison between the two. But it’s that, that dumbing down of critical thinking that I’m seeing more and more in, in, in young journalist, and this is, this is a really good example of it.