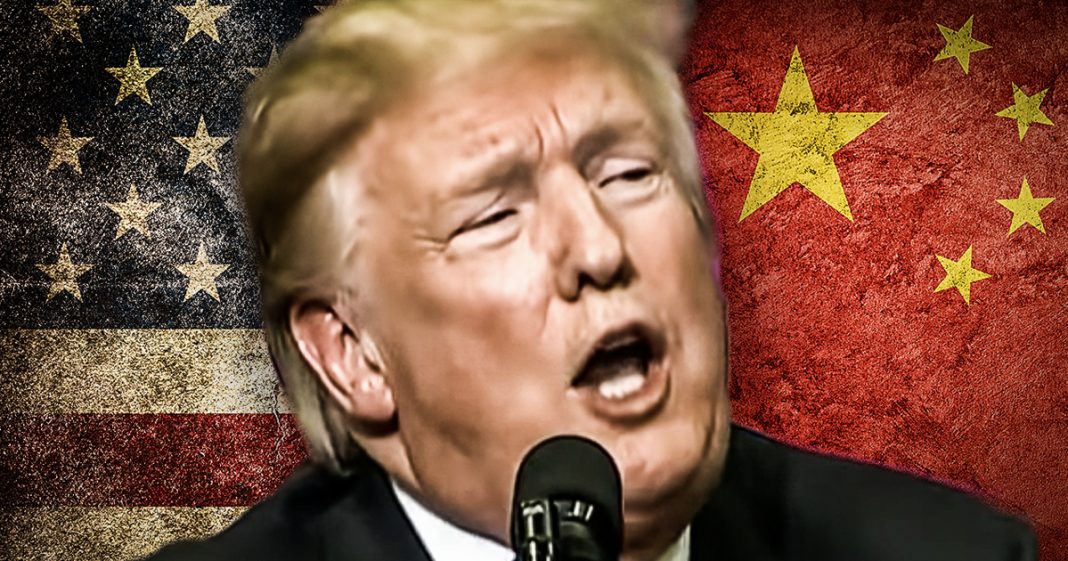 Donald Trump has decided that he wants to impose even more tariffs on Chinese goods and businesses in the United States are starting to panic about what that is going to do to them. The United States is already suffering greatly under Trump’s trade wars, but in spite of that suffering, he shows absolutely no signs of reversing this disastrous policies. Ring of Fire’s Farron Cousins explains what’s happening.

As any economist will tell you, Donald Trump’s trade wars have been an absolute failure for us here in the United States. And perhaps in spite of that or because of that, Donald Trump decided a few days ago that, hey, we’re going to double down on it and I’m going to put more tariffs on an additional $200 billion worth of goods from China. We’re going to raise the tariffs from 10% to 25% on these new $200 billion worth of goods. A lot of them used for things like luggage, uh, making baseball, hats, briefcases, a all kinds of stuff like that. That’s the, uh, basic industry slash goods that are going to be hurt the most from these new tariffs. Businesses are understandably pissed off now. They were basically given only a few days notice that their entire industry, if you make luggage or hats or briefcases, whatever it is, you’re about to take a major hit, the goods you need to produce your products, we’re going to raise the prices basically by 15%.

So all your retailers or wholesalers out there, they’re going to have to pay you more money to get the same product and they may not be able to do that. And we know that because that’s exactly what businesses are telling us right now. Their distributors, their wholesalers, they’re retailers have called and actually cancelled orders in the last five days because of what Donald Trump’s tariffs are going to do to the prices of these specific goods. Now here’s the thing. The reason Trump has once again decided to escalate the trade wars is because allegedly China has not upheld their end of the bargain, and he warned them at the beginning of January that we’re going to put more tariffs on $200 billion worth of goods. He had held off on it, didn’t do it yet, didn’t do it yet, didn’t do it yet. And now the treasury says that by Friday these tariffs will be in place, will not could.

They will be in place from 10% to 25% and here’s the other thing that Donald Trump doesn’t seem to understand. We pay the price. American consumers are the ones who pay the price. Now, according to economists, he expects China to just eat the cost and take the loss, but instead what they are doing and what any other company would do in that situation, they’re just raising their price to make up for the extra terror. They still get the same amount of money. It’s just we have to pay more for it. Here in the United States. That’s how that works. I guess the treasury gets a little more money as well because the tariff is now being paid at 25% instead of 10 China gets all their profit because they raised the price. The only people who are getting screwed are the American citizens who have to pay the final price tag.

Trump doesn’t seem to understand that according to a recent poll, 75% of companies in the United States involved in manufacturing of any kind, whether it’s clothing or cars and everything in between. 75% of them said they have been negatively impacted by Donald Trump’s trade wars. Why? Because China’s not lowering the cost of their goods. They’re raising the prices. So we pay more. And you know what else American producers are actually doing, even if they’re not affected by the trade wars, they’re actually raising their prices to match the higher price of the Chinese goods. So no matter what we buy, whether we choose to buy stuff that was home grown here in America or stuff, use of parts from overseas, we’re still getting ripped off because that’s how it’s working right now for some strange reason. But hey, that’s capitalism, right? Everybody can raise their prices, lower their prices whenever the hell they choose to do so. And again, we’re the ones getting screwed on it. Donald Trump is an absolute moron. If he thinks that escalating these trade wars is going to have any effect on China whatsoever, they’re doing fine. They’re doing absolutely fine. US government’s doing fine because they’re still getting their money. They’re actually getting more of it. It’s just the American consumers, the average working class American citizen that takes the hit on this, because Donald Trump is too stupid to understand how his trade wars actually work.