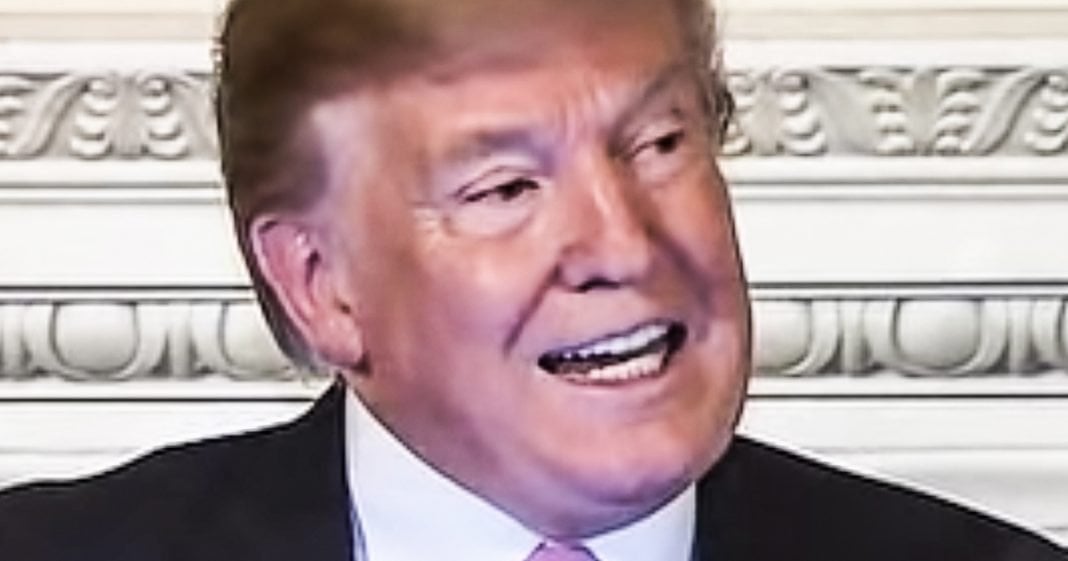 It has only been three months since Donald Trump pulled the United States out of the INF treaty with Russia, but in that short time the President has already spent more than $1 billion on new missiles. Our military is being ramped up to dangerous levels, and considering the fact that this administration is already trying to start new wars in at least two countries, we should all be very concerned about what the endgame is for this administration. Ring of Fire’s Farron Cousins discusses this.

Back in February, Donald Trump began the process of pulling the United States out of the intermediate range nuclear forces treaty, the INF treaty, which basically said, hey, we as the United States and you as Russia, we’re not going to make these intermediate range, nuclear missiles, ballistic missiles, whatever it is, we’re going to cut back on missile production. You’re going to do it, and the rest of the world is going to do it. That Cold War era treaties signed in 1987 was one of the biggest reasons we did not have a massive weapons stockpile, a new arms race taking place across the planet. Trump, Donald Trump pulled us out of that and do you know what’s happened in that three months since he pulled us out of that treaty? We’re right back in the middle of a new global arms race. Ladies and gentlemen, the United States in the last three months alone has spent one point $1 billion on new missiles.

We are stockpiling missiles like they’re having some kind of buy one get one free sale right now, but don’t worry. Don’t worry. Don’t worry. It’s not just us. It’s literally everyone across the globe. In the last few months, we have seen the expenditures of $116 billion across the globe of people buying more missiles, stockpiling them, concerned that we, the US might do something to them that another country might do something. That instability in these other countries next door to them might force their country to have to act. The U s has been crazy with the North Korea. God only knows what’s going to happen there. Hell, we want to invade Venezuela. It ran throw Syria in there for good measure to because why the hell not right? $116 billion in recent months on missiles across the globe and it all stems from Donald Trump and I take no joy whatsoever in reiterating this. When Trump announced that he was pulling us out of the INF treaty, you had a lot of people on social media saying, oh, this proves he’s in Putin’s pocket cause this is just what Russia wants at the time.

I said, no, this is not what Russia wants. The only people who want this are the people who sell missiles because they will be the only people who benefit from this. We were 100% correct about that because they’ve already made $116 billion in the last few months. They’re the ones who benefit. Literally. Everyone else loses and eventually, obviously they lose too because I don’t think they’re, uh, facilities. Their homes, their cars are our missile proof. So when the next big conflict arises, there’s not a whole hell of a lot these people can do except maybe look out their factory windows in horror and ask themselves, my God, what have I done? Why? Oh, why did I choose this way of life? Why have I decided to sell war just to make a few dollars?

Okay. I imagine eventually we’re going to have a few people, not many. Most of them don’t have conscience is, but we will probably have a few in this country facing that kind of situation. A real Tony Stark type, like, oh my God, what have I done?

That’s what we’re looking at here. But again, trace it back. It all goes back to Donald Trump pulling us out of that INF treaty by claiming that Russia was already violating it. So screw it, although there’s actually no evidence whatsoever to suggest that Russia was, uh, not abiding by it. The truth is, our defense contractors wanted to sell more missiles, but it’s hard to do that when our government signed a piece of paper saying we weren’t going to have as many missiles, but if you can get them to tear up that piece of paper than who, boy, get ready to sell a lot of missiles, and that is exactly what has happened.