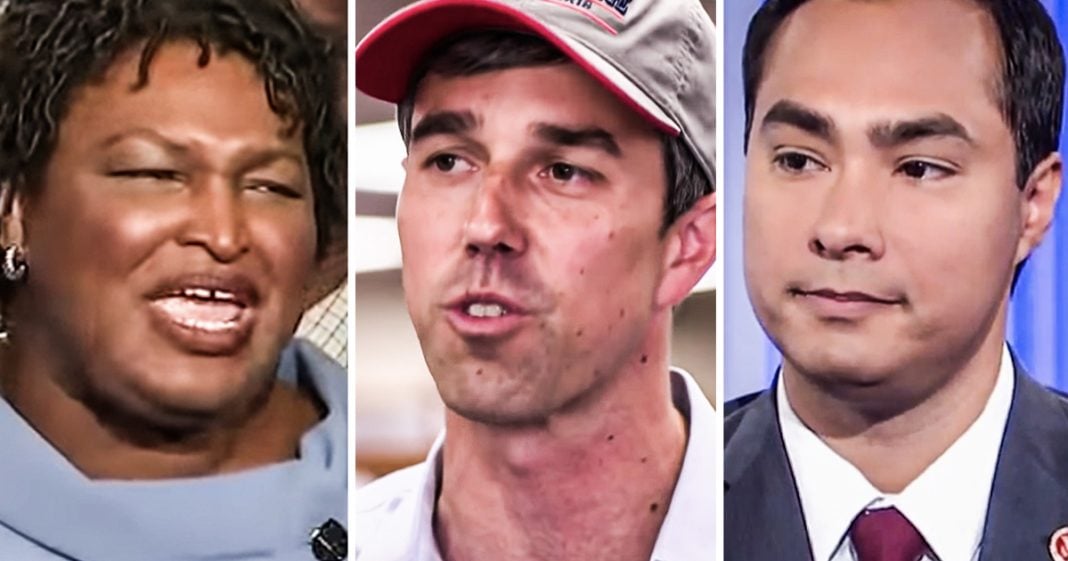 Stacey Abrams, Pete Buttigieg, Beto O’Rourke, Joaquin Castro, and several other prominent Democrats have decided that they will NOT be running for Senate in 2020, even though their states could easily flip from red to blue with a good candidate (and they would all be good Senate candidates.) Retaking the Senate in 2020 is crucial to any Democratic victory, but the Democrats are losing some very real talent that could help them take it back. Ring of Fire’s Farron Cousins discusses this.

You know, we’ve spent a lot of time talking. Everybody spent a lot of time talking about the 2020 presidential election. We got a ton of Democrats on one side. What’s not being talked about as much, at least of course, up until a few days ago. We’ve mentioned it prior to that, but finally other people are starting to pay attention that we also have a Senate that is very much in play in 2020. We have almost twice as many republicans up for reelection as we do Democrats, which means 100%. Yes, we could flip power in the Senate in a very dramatic way in 2020. The problem is this. Some of the people who could help us flip the Senate are instead deciding to run for president or worse. Some of the people who could flip it have decided they don’t want to do it. And now I don’t want to sit here and undermine anybody’s personal choice.

That is not my position to do that, but I can’t express my disappointment. Stacey Abrams down in Georgia told us earlier this week that she wasn’t going to seek, uh, the Senate seat. She wasn’t going to run against the Republican and Georgia. And that to me is one of the biggest disappointments I have seen, uh, in politics in a very long time. Stacey Abrams is brilliant. Stacey Abrams is wonderful. Stacey Abrams would likely be able to win that seat more so, I think, than any other Democratic challenger. Beto O’Rourke, not a huge fan of him as a presidential candidate, as a Senate candidate. Hell yeah.

Beto O’Rourke instead of running for president, should be running against John Cornyn for his Senate seat. Corn ends, a guy that’s been in the Senate for way too long. Beto O’Rourke, huge national name at this point. Probably not big enough to win a presidential election, but damn sure. Big enough to attract some donors and get people to come to the polls in 2020 in the state of Texas to put him in the Senate and to get John Corn and out and it Beto O’Rourke doesn’t do it. We could have Joaquin Castro. However, he has also announced that he’s not going to run either Colorado, similar situations, Iowa, similar situations where good prominent Democrats have said, I don’t want to run for that Senate seat. And to those who simply say, I don’t want to run, that’s not for me. I cannot fault you for that at all. That’s your choice. And you’re saying, I don’t want to do this.

And I understand it. And to be honest, I respect your opinion. To me, the one that pisses me off is Beto cause Beto making the choice like I wanted to be a senator, but now I think a want to be a president. He is letting ambition get in the way of what is best for this country. He knows he’s not going to win the nomination. Let’s be 100% about that. Beto O’Rourke is not going to even get the Democratic nomination. If he does, I promise you I will eat my words. I will print them out, put them in a blender with some water and drink it for you right here on camera. But I can promise you he won’t win that nomination. Hold me to it. Please hold me to it if it happens. But he’s not. But Beto Damn sure could win that Senate seat. He came this close to beating Ted Cruz.

He could beat John Cornyn. Every Senate race matters. We know Doug Jones, as long as he doesn’t go up against Roy Moore again. And maybe even if he does go up against Roy Moore, we know Doug Jones is gonna lose. Unfortunately that is a given. Alabama wants a Republican. The only reason Doug Jones is in there in the first place is because he ran against the creepy pedophile, put him up against literally any other candidate and Doug Jones is gone. So there’s one senate seat that the Democrats are actually going to lose most likely. But there are so many others. Georgia, Texas, Iowa, Colorado, so many that we could pick up. If we put up a good enough candidate and Kentucky, we could likely beat Mitch McConnell.

Yeah, but the best people available don’t want to do it. So what do we do now? We’ve got time. We have plenty of time. But we’ve got to find good people. We’ve got to find another Stacey Abrams. We can’t just say, okay, well she won’t do it. Let’s just find another democrat. It can’t just be just another democrat. It has to be somebody as passionate, as smart and as energetic as a Stacey Abrams. We need Stacey Abrams all over this place, all over this country. We need Andrew Gillum all over this country. We need Pete Buttigiegs, not running for president, although he’s in Indiana. There is no a US Senate seat up this year. So, okay. But people like that, you know, the, these transformational figures, they may not work well as presidents, but they could do wonders and help turn this country around in the Senate.