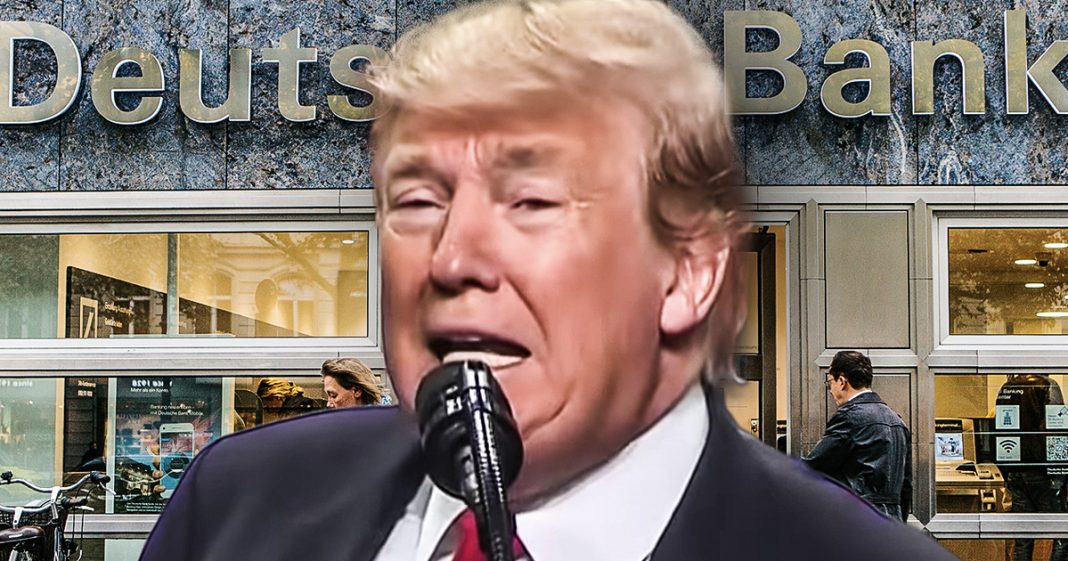 Executives at Deutsche Bank say that they are fully ready to comply with the subpoenas that they have been served by Congressional Democrats even as the Trump family has filed a lawsuit to prevent that from happening. They say that they have “reams of papers”, including his tax returns, ready to be handed over as soon as the courts tell them that it is ok. Trump is in trouble, and his pathetic lawsuit isn’t going to save him, as Ring of Fire’s Farron Cousins explains.

So earlier this week, Donald Trump and his three idiot kids sued Deutsche Bank and capital one bank to try to prevent them from complying with congressional subpoenas, seeking all of the financial documents that they have on Donald Trump and his Trump organizations and of course all of his kids, these banks having the subpoenas and now knowing that a lawsuit’s been filed to stop them from handing anything over, still say they’re 100% ready to work with these Democrats in Congress. They have quote reams of documents ready to be handed over. Deutsche Bank has also a explaining a little further and said, we not only have these reams of documents also have a lot of his tax returns. We have a lot of his business tax returns. All of that is right here in the file and it’s ready to go. We want to help. We want to work with Congress, but now they’re saying, unfortunately we can’t do it just yet because we have to see what’s going to happen with this lawsuit.

If we’re barred from doing it, then unfortunately were barred from doing it if we’re not barred than open the flood gates because here it comes. Now I know some people may be disappointed. Everybody’s eager to get this guy out of office and yes, now they can’t necessarily hand those documents over. But to that I say relax. Those documents are going to make their way to Congress. There’s, there’s really nothing that can stop it. This lawsuit can slightly delay it, but given the fact that the Democrats have reasonable suspicion, probable cause if you will, to get these documents, there is nothing Trump can do to stop it. And that reasonable suspicion comes in the form of Michael Cohen’s testimony where he implicated Donald Trump in bank fraud. That’s all they needed. I mean, hell technically they could do even less than that, but he said that to them under oath.

They’re supposed to take him at his word unless somebody can prove he lied, which so far they haven’t and therefore they have enough reason. They have the authority, they have the power to subpoena these documents to see if Michael Cohen’s story checks out and whether or not the president violated the law. That’s it. That’s all that’s going to happen here. These documents are not going to be filed back away at Deutsche Bank and capital one because this Trump lawsuit was successful. That’s really not even a possibility at this point, especially when you consider that the entire lawsuit was written like a very long and unhinged Donald Trump tweet. They mentioned presidential harassment in a legal filing, and this honestly blows my mind that Republicans are so dumb. They don’t understand this because we have seen it with other groups filing lawsuits, you know a defamation suit, a slander suit, a cease and desist, a Devin Nunes suing the frickin’ cow parody account. Okay? Okay. You don’t use emotion. Okay. At all. You don’t make wild conspiracy theory claims at all and an official lawsuit filing. You don’t do it because judges do look at the tone of this. They look at the wording, they look at the phrasing and every single word that you use or do not use makes a difference on whether or not they even say that you have standing to file the suit. Honest to God, Republican lawyers might actually be the dumbest people in this entire country.

Yeah, because they screw up these cases before they even go to court, and that’s exactly what’s going to happen with this lawsuit that Trump and his idiot kids and their businesses have filed. They’re not going to go anywhere. All this is going to do is put a temporary delay on those banks from handing over those documents. At best, at worst, that delay is only going to be a couple of days for the Trump family before the judge says, nope. They have standing. They have the authority, they have the power, they have the suspicion away with the documents have added Democrats. That’s pretty much the only way this story ends for Donald Trump.