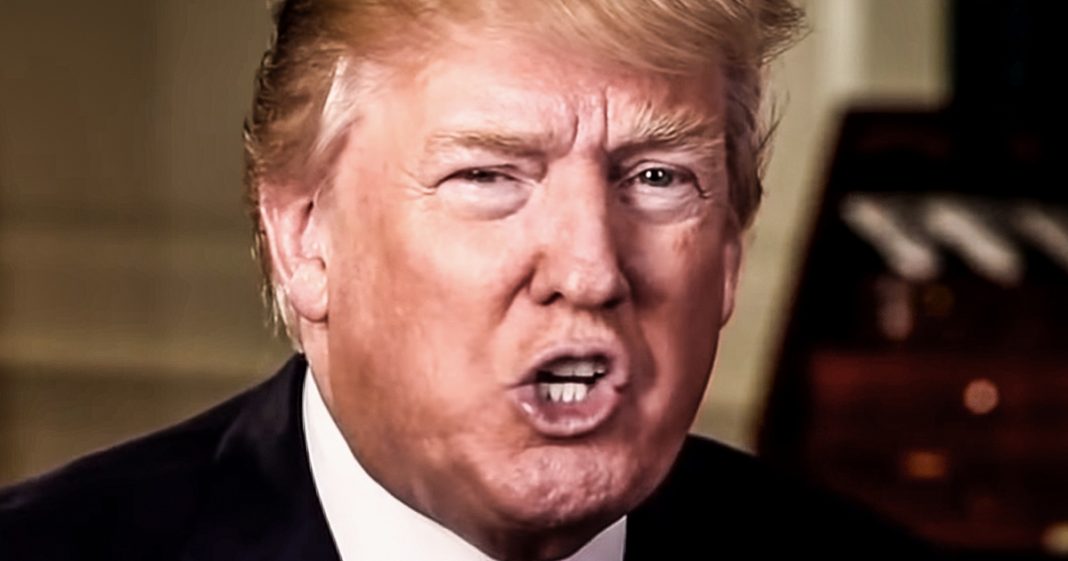 It might be a fair statement to say that no other US president has loved immigrants as much as Donald Trump. Sure, he tells the world that they are awful people, but his businesses would have never survived if he hadn’t used undocumented workers at his resorts. Now we’ve learned that he is being investigated for forcing these illegal immigrants to work at his resorts off the clock, meaning they weren’t getting paid for their efforts in many instances. This story has been corroborated by former managers at these clubs. Ring of Fire’s Farron Cousins explains what’s happening.

Nobody loves illegal immigrants more than Donald Trump, at least probably out of all of the sitting United States presidents we’ve ever had. And I know that seems weird to say, given his constant attacks on even legal immigrants here in the United States. But Trust me, Donald Trump absolutely loves undocumented illegal migrant workers here in the United States. And we know that for a fact, because those are the people that have essentially been propping up his businesses for decades. You know, only recently after it was reported by New York Times and Washington Post, uh, did his organizations finally start mass firing undocumented workers. But it’s a little too late for that because not only were you acting outside the law by hiring undocumented workers, which to be honest, I’m not going to lie. I don’t have a problem with that. I don’t. I absolutely do not have a problem with that. And I don’t care if people have a problem with me not having a problem with it.

I’m not, I’m not going to lose any sleep about these people who came here. Maybe they didn’t come legally, but they’re working, they’re paying taxes, they’re doing things the right way, whatever. Nonetheless, the Trump organization, uh, several of his golf clubs up north had been firing undocumented immigrants and now these emigrants now that they don’t have to worry about retaliation from the managers, that those golf courses are coming forward with stories about how the Trump organization forced them to work off the clock. They didn’t want to pay over time. They didn’t want to pay him regular time. So when a shift was over, they would make them clock out and then continue to work for several hours. So far, six different former undocumented employees at a Trump’s clubs up north in New York and New Jersey have come forward with similar allegations and to make things so much better, a former manager has also stepped forward to completely corroborate and expand upon these allegations against the Trump organization here.

Um, here, this is exactly what the former manager had to say. He said, you know, we would go in there and say, you want to be here? Don’t clock in for overtime. Clock out and work off the clock. He also confirmed that the managers knew that these undocumented workers, they couldn’t go to anybody for help. They’re undocumented, you know, essentially they understand that if they piss off, the management management is just going to have them deported. So they’re stuck between a rock and a hard place. They want to work, they want to get paid for it. They don’t want to be deported, but they can’t piss off the managers because then it all goes away. So the managers, we’re essentially acting like slave owners at that point. And that’s what this former manager said about it. He goes on to say, uh, there was a conscious effort to pay loss wages because they knew about the lack of documents, you know, where are they going to go?

That was routine at these places. And only recently, again, once the reports came out showing that not only were they hiring undocumented workers, but they were trying to falsify documents to hire more undocumented workers, did they start firing the undocumented workers? Which is a shame for those people. Many of these workers who, again, they weren’t legal citizens, they weren’t even here legally, but they had been working at, uh, Trump’s golf resorts for more than a decade. And now we find out that things were so much worse than we already knew about. But luckily this too has been added to the investigations taking place in New York. So now in addition to looking into his bank records, looking into his inaugural committee, they’re also having to look into the Labor violations and immigration law violations that took place at Trump’s golf resorts. But I’ll say it again, if it weren’t for illegal undocumented or even seasonal migrant workers that are here legally, Trump’s businesses would be absolute and utter failures. So he may talk a big game to drum up his base about how horrible immigrants are, but for his entire life behind the scenes that man, Donald Trump has been 100% dependent on foreigners helping to prop up his business even when he and his kids and his organization know that these people aren’t here legally.