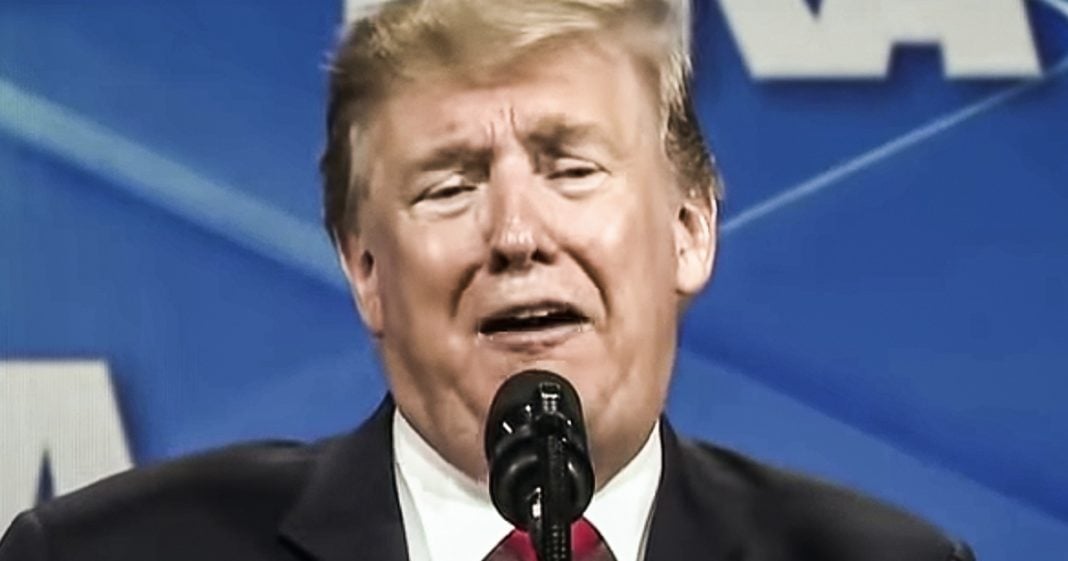 Nearly 20 states in the US have passed or are considering some form of legislation that would prevent anyone from appearing on a presidential ballot if they don’t release their tax returns, which means that Trump wouldn’t be on the ballot in these states. The legislation would have a hard time surviving in court, but it would also raise awareness about the fact that Trump is actually suing to keep his financial records, including his tax returns, hidden from the public. Ring of Fire’s Farron Cousins discusses this.

Almost 20 states in the US today are working to keep Donald Trump off of the 2020 presidential ballot and they’re doing this by proposing or attempting to pass legislation at the state level that would prevent anyone from appearing on a presidential ballot, either president or vice president if they refuse to release at least five years of their tax returns. Now, currently it is not a law. The presidential candidates or even presidents have to release their tax returns. It had just been a tradition in this country since about 1970. Uh, you know, kind of just something that everybody did to show, Hey, I’m on the level. I am honest, I am transparent. Here are my records. Have at it.

Trump changed all that. Now he pledged relentlessly during his campaign that he was going to release these tax returns. It was totally going to happen. This audit is going to be done soon. Then after that, here they come, folks, well guess what? We’re still getting the same BS today that I can’t release them because I’m under audit. Even though an audit would not actually prevent him from being able to release his tax returns. But he still says he’s not going to do it. In fact, he is actually suing the house oversight committee because they’re trying to get his tax returns. He is suing Democrats in the House of Representatives to prevent his tax returns from getting into their hands. So do you think the threat of being left off a ballot and almost 20 states is going to force him to release his tax returns? It absolutely will not.

But I think the states understand that. I think the states also understand that this probably would not hold up in court at all. I mean on four. I would love for it to, don’t get me wrong, I would love for it to, I think we should have a law that says release your tax returns and you can’t be on a ballot. I don’t care if you’re Democrat or Republican, release the dam tax returns, but it’s not going to hold up in court if it were a law at the federal level. Maybe a little bit different. But this does seem pure political spite for Donald Trump, which I’m also totally okay with because what this is going to do is keep this issue alive. It’s going to continue to put pressure on the president of the United States and it’s going to continue to remind Republicans that he lied to you about his tax returns, and that is so desperate to hide them that he’s actually suing the House of Representatives. That’s not normal. That’s not normal. Furthermore, Michael Cohen, Donald Trump’s former lawyer slash fixer, said that Donald Trump is afraid to release his tax returns because he knows he’s had these conversations with him because he’s afraid that if he releases them, it’s going to open him up to further audits and huge financial penalties from the now. Gee, I wonder what could result in financial penalties other than the fact that this man has obviously based on Michael Cohen’s words lightened his tax returns. Lied is tax filings. Otherwise, why would he not want us to see them?

Nothing about Trump’s defense adds up. He is trying to hide something that is obvious, but is he going to be able to hide it long enough to survive the 2020 election? That is the question of the day because that House oversight committee that he is suing, they 100% have the authority to request the tax returns of any American citizen that they want. He can’t stop that. It’s just a matter of can we get the courts to go through it and go ahead and say the house can do this quick enough to where they can get them and analyze them and move forward with charges if necessary. Prior to the 2020 election. I admire what these states are doing at the, at the level they are trying to prevent him from being on the ballot, but I also think that this has no chance of ever staying a a law once it goes to the courts congress. However, there’s nothing the courts are Donald Trump can do about that. That is their authority. Now. If they can do it fast enough, we can get the tax returns, get that info out to the public and find out exactly what the Hell Donald Trump is hiding before the 2020 elections. And considering the fact that he wants this dead and buried, I’m willing to bet that his lawyers are going to try to expedite this case as much as they can, which is only going to come back to bite them in the end.