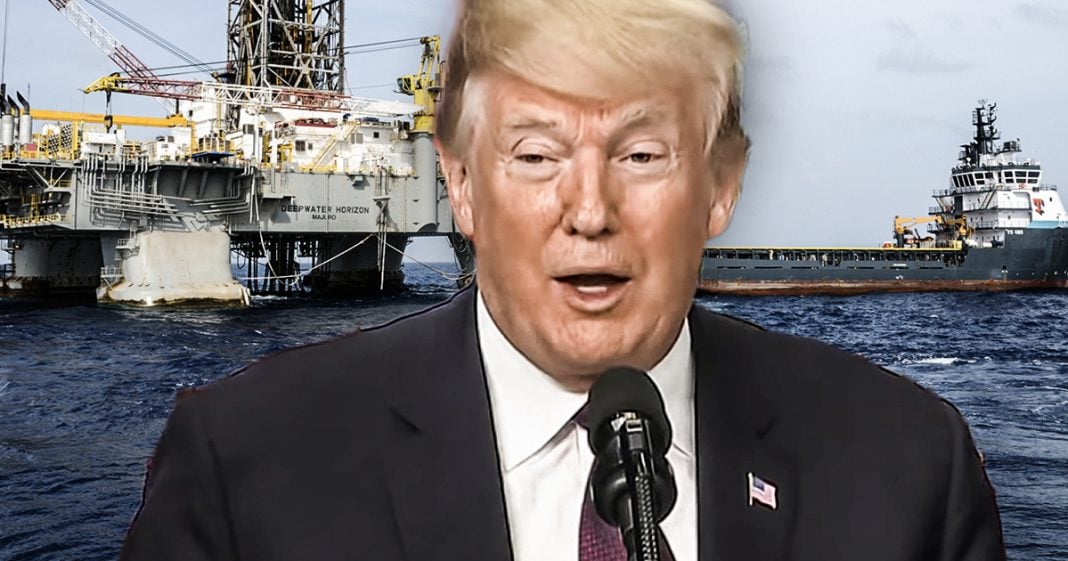 The Trump administration has decided that the health of our waters and the people who depend on those water isn’t that big of a concern, and his administration has actually loosened regulations on deepwater oil drilling to the levels that they were prior to the 2010 Deepwater Horizon oil rig explosion and the subsequent spill. Ring of Fire’s Farron Cousins explains what this rollback is going to do and why the administration made this decision.

It’s now been nine years since the deep water horizon oil rig explosion and subsequent oil leak into the Gulf of Mexico. We’re millions of barrels of oil leaked into the Gulf spent months actually in many cases, years washing up on our shore and the forms of slicks and tar balls and tar mats, which if you look hard enough out there today on the coast of the Gulf of Mexico, I guarantee you you can still find some of those tar balls and smaller tar mats. But nonetheless, it’s been nine years since that a tragedy took place that also claimed the lives of 11 oil rig workers.

It took six years after that disaster happened for the Obama administration to finally finalize their, their rules to make sure it didn’t happen again. Better late than never, I guess. Right. I mean took you six years to write the things, but in your last few months in office, sure you got it done. You finalized them. They were put in place and it only took less than three years since that happened for the Trump administration to come along and repeal those new regulations that were supposed to prevent another deep water horizon tragedy, part of this, uh, new rules that the Trump administration has put in place. Because it also includes obviously the repeal of the stricter standards. And it also gives them a little bit more to work with as well. One of the things they’re now going to be allowed to do, which honest to God is exactly what gave us the deep water horizon oil spill is it they can now have a third party inspect their equipment instead of having the federal government do it.

You know, we don’t need government regulators from the Department of Interior coming out there and inspecting everything. Just get us a third party thing, you know, sign off on it, submit it. We’re totally good to go. And also, uh, you don’t have to get it, uh, inspected as frequently as you used to. Yeah. Just go ahead and you just take a little bit longer time in between there. I know you’re busy. God forbid you do something that might save lives and save an entire ecosystem in the Gulf of Mexico. For those of you who are not familiar with exactly what happened that led to the deep water horizon explosion, let me go ahead and enlighten you because I spent every single day working on this, studying it, writing about it, doing segments on it for a year after it happened, and one of the most telling things that we learned was the fact that the Bush administration, and I know Obama was running the show, but it was the Bush administration that put in the rules and actually worked with the groups, Trans Ocean, Halliburton and BP who were running the rig and actually allowed them, the rig workers themselves to fill in the safety inspections, report in Pencil and then just hand it over to the government regulators who would later go over it in pen. That actually happened. That is honest to God a thing that happened. The government didn’t go in there and inspect all the equipment like they were supposed to. Neither did the workers. They just filled out their little thing, handed it over. The government workers filled out in pen. Everybody’s good to go because Chris Oynes was good friends with the people at BP, the people on the rig, Dick Cheney, everybody.

This whole incestuous relationship that Obama didn’t recognize when he came into office didn’t know this was happening most likely. And then we got the disaster. But Trump’s taken us back there saying, no, I don’t worry about having an inspected. Just get somebody else to come in and take a look at it. We don’t need our folks going out there and doing it. It’s the same situation again and it is going to end the exact same way because since the deep water horizon equipment wasn’t inspected, it failed. And that’s what led to the disaster. The blowout preventer, uh, I think it was a $500 piece of equipment. A $500 piece of equipment malfunctioned and that’s what killed 11 men, destroyed the Gulf of Mexico ecosystem and cost these companies billions of dollars because they didn’t want to spend $500. It frequently is something as ridiculous as that.

Ladies and gentlemen, when you look at a lot of the, the automobile recalls that we’ve seen and we’ve discussed, it’ll usually be a piece that’s literally a couple of dollars. But after a certain number of people have died, the automobile manufacturer says, okay, everybody come in, we’ll replace your $3 part with a $4 part. Maybe that’ll stop the deaths. A $500 part, a $500 part would have likely prevented the disaster in the Gulf of Mexico in 2010, $500. And instead, it is what it is. And those of us who live here, who had the smell that oil just driving to work every day, even if we weren’t even near the golf, that’s not something we’re going to forget. We’re going to remember how that feels. And so yes, it’s going to Piss us off all, uh, just a little bit more when we hear that this administration is once again setting the stage for another disaster like this to happen. But that is exactly what they’re doing.