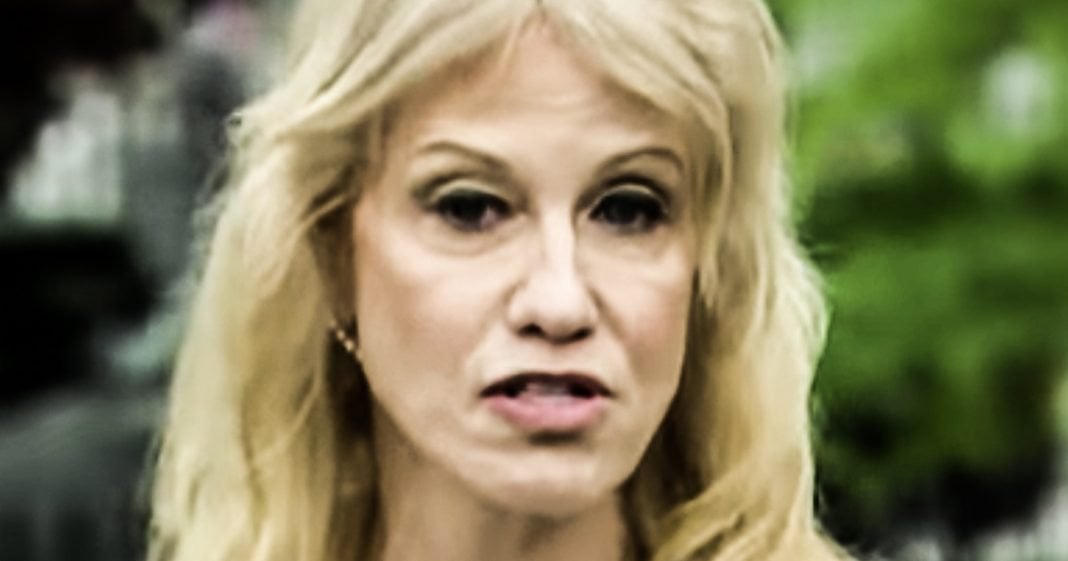 Earlier this week, Kellyanne Conway took shots at Joe Biden while standing in front of the White House. While this may seem innocent enough, it was actually a very clear violation of the Hatch Act, an obscure law that has landed Kellyanne in hot water multiple times throughout her tenure at the White House. Ring of Fire’s Farron Cousins explains this latest violation committed by Conway.

Kellyanne Conway loves breaking the law. She absolutely loves it. I mean, there’s no other way to say that. If she didn’t love doing it, she wouldn’t be doing it all of the time. You See, last March, 2018 the uh, office of special counsel within the White House actually came out and they said, Yep, we have 100% two different instances where we can verify and prove Kellyanne Conway broke the law by violating the Hatch Act. We’re going to turn it over to you now. White House to discipline her however you see fit. And then they essentially did nothing. Basically what the office of special counsel and wanted them to do is, hey, can you fire her? Cause she’s breaking the law. But of course, Donald Trump’s not going to fire her. She is his most loyal toady and she ain’t going anywhere, which is why to this day, to this week, Kellyanne Conway continues to break the law twice this week on both Tuesday and Wednesday.

Kellyanne Conway once again very clearly and obviously violated the Hatch Act by speaking negatively about Joe Biden in the driveway of the White House. Now, I know that seems innocuous enough, right? You know, she’s a Republican. Joe Biden’s a Democrat, even a lot of Democrats don’t like Joe Biden, but he’s still at the top of Poles for some reason. But Anyway, okay, Kellyanne Conway takes a shot at him two days in a row. Well, unfortunately, given the fact that she was acting in her official position as whatever the fuck she is at the White House, that’s a violation of the hatch act. You can’t do that. That is against the law specifically. Um, uh, prohibits government employees other than elected officials from using their official positions to influence the result of an election. Kellyanne Conway is not an elected official by speaking negatively about Joe Biden. That is an attempt to sway an election by getting people to not like Joe Biden, which trust me, Biden’s doing a good, a good enough job of that himself.

He doesn’t need you to do it, Kellyanne. But nonetheless, you did it and you did it two days in a row. You broke the law and nothing’s going to happen because honest to God, and it’s depressing to even say this, this is just the story of this administration at this point. We get everybody break in the law left and right. We’ve got some wonderful a activist groups out there who file lawsuits and force this administration to look at the fact that they broke the law, but unfortunately beyond that, they can’t enforce anything. So these people just go about their day. Kellyanne Conway should have been fired well over a year ago for her constant violations of the hatch act. She should be fired today for constantly breaking the rules, breaking the law by violating the Hatch Act. But unfortunately she won’t be. She’s going to continue to suck up to the president. She’s going to continue to lie for him on television, and more importantly, she’s going to continue to violate the hatch act every time she opens her damn mouth.