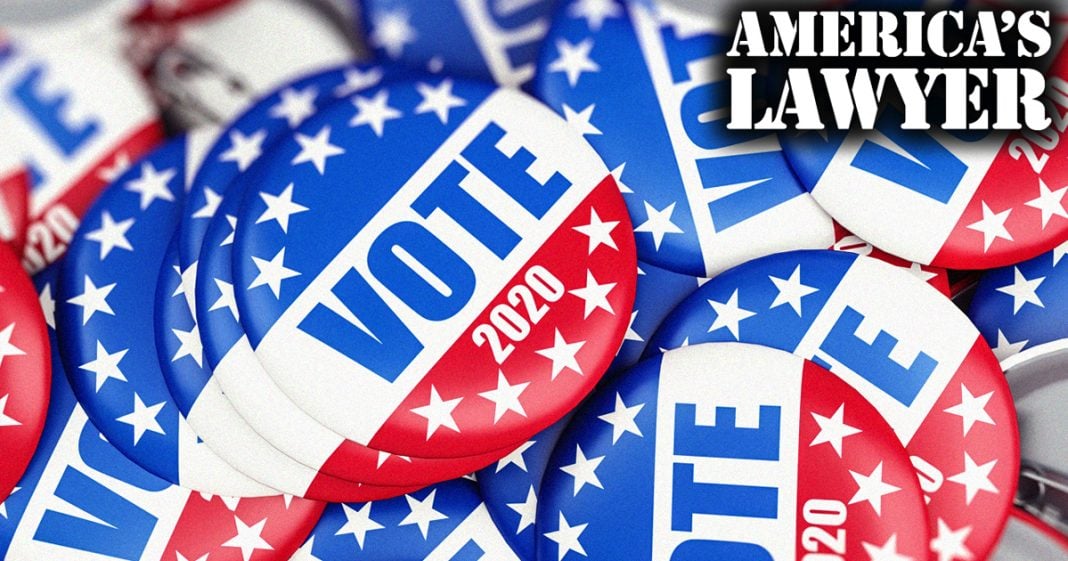 Via America’s Lawyer: Investigate Journalist Mollye Barrows joins Farron Cousins to talk about reasons behind why the Florida House passed a bill that would require felons to pay all court fees and costs in addition to restitution before becoming eligible to vote.  Farron Cousins fills in for Mike Papantonio on this episode of America’s Lawyer.

Farron Cousins:                  Florida voters approved an amendment last year that restored felon voting rights. New Bills passed by the Florida legislature are going to make it a lot harder for that to actually happen. Legal journalist Mollye Barrows with the Trial Lawyer Magazine is here to explain. Mollye, always appreciate you talking with me here, but, but let’s get down in this. Tell us about this horrible bill that just passed the House.

Mollye Barrows:                Yes. Just to, just went through the House committee and there’s also a committee that it just passed in the Senate as well. They have their own similar version. So in essence they wanted to clarify the language. They called it an implementation bill, if you will. So they’re clarifying the language of house state supervisor, I mean a House Supervisor of Elections in different counties can implement amendment four, which by the way passed with some 64% of Florida approval, voter approval.

And so in this sense, this, they’re now clarifying that. And then so clarifying, they’re essentially imposing more barriers for these felons who have served their prison time, but they’re now saying that these court fees and court costs basically associated with any retro, any restitution that they must pay is associated with their sentencing now. And until they pay those costs, they cannot get their right to vote restored. And they’ve also gone as far as to say that when defining, cause there’s two groups that are excluded for getting the right to vote back and that’s if you’re convicted of murder and also sexual offenses.

They included every sexual offense in the book to fall under that, so that anybody who was convicted of any kind of sexual offense, including prostitution, or maybe even placing an adult entertainment, entertainment store within 2,500 feet of a school. That also qualifies if you’re convicted of that, as, as losing your right to vote. So that’s essentially what they did, is place all these roadblocks and barriers to these bills that will make it much harder for a felon who’s actually completed their prison time to get back into the system and vote again.

Farron Cousins:                  Well, from the moment, essentially that this amendment was passed, we, we, which we have had a Republican controlled state for, for many, many, many years at this point. But, but they had already started even before the new folks were sworn in.

Mollye Barrows:                That’s exactly right. And what’s so, what’s such a shame about that is here, like you said, Republicans dominate Florida and have for a long time, but this is one amendment that passed that was very partisan. I mean, I think that there was one study that I read that 40% of the people who approved this, we’re also Trump voters. So you really, you know, it crossed party lines for people to agree to this.

And the spirit of it was if you have committed a crime, you’ve served your sentence, which is serving time in a corrections facility, then you should have your right to vote given back to you. Florida has more core costs and fees, I think they’re one of the highest states in the union another report that I read said, I want to say the second highest as far as like court fees that are associated with incarceration and being tried in the, in the criminal justice system.

But going back to your point, Ron DeSantis newly elected as well, you know, he was elected the same election that this amendment was passed. And so there was even that concerned that that commentary about, hey, we’ve got this heavy Republican governor who was clearly a Trump ally and supportive of him, but voters did pass this amendment. So it goes to show that they are willing to, to cross both sides of the aisle.

But Ron DeSantis, DeSantis, as soon as he was in office, he basically said, you know what, I really want the legislature to take a look at this. I know you guys want us to implement this right now and give felons their vote to right, that right to vote back so they can go ahead and get busy voting in all these elections that we have, because there were some special elections in February. And then of course we’ve got some that will be coming up as well, but these felons, even if they wanted to, were not going to necessarily get their right to vote back because now that Ron DeSantis has asked the state legislature to take a look at this, and they have, they have found plenty of reasons apparently to, to give more barriers. And so there’s been a lot of discussion about if this is a poll tax as a result.

Farron Cousins:                  And so, there hasn’t been any elections since at least the year 2000 that’s been decided by more than a few thousand votes and I’m talking Senate, Governor and presidential elections. Even the ones that went for Obama, they were close. You know, Bush v Gore obviously 500 vote difference. The, the 2016 election. But we’re talking about 1.5 million people that could potentially be voting in the next election and suddenly these super close elections of only a thousand or so people or 10,000 or even 50,000 people.

Farron Cousins:                  Suddenly those are out the window because the entire electorate has changed. And that is what these Republicans are scared of.

Mollye Barrows:                I completely agree with you Farron. I think that’s obvious to anyone. Of course you have a number of civil rights groups that are saying the same thing. The Southern Poverty Law Center, the ACLU also, this group called the Florida Rights Restoration Coalition and, and various other grassroots organizations that were involved in even getting amendment four on the ballot because this is an amendment they’d been trying to get before voters for over 20 years. And the Florida legislature has continued to put up roadblocks along that process.

So here finally gets before voters, they pass it 64% of the vote. One and a half million voters could potentially extensively be back on the voting rolls. And the Republicans were like, yeah, but you know what, we see an in. And because going back to your point, I mean most of those convicted felons who could potentially be put on the voting rolls again are African American and as a rule, most of those vote democratically.

So in essence, by creating these barriers, you’re keeping more Democrats from the polls. That’s not to say that they’re all democrats. That’s not to say that all these guys would even, or women would even want their voting rights restored or would go through the process even if there weren’t these additional barriers. But let’s just say for a second that it’s okay to go ahead and make the courts fees and, you know, as part of the sentence. And in some cases they are, restitution is part of their sentence and they do need to pay that according to some of these civil rights groups. But there are ways around that.

They could be basically included in a, in a civil lien so that it would essentially make it so that they served their time and they could still vote. They would still be obligated to pay those fines. They would just be in the civil category maybe on some property that they held or, you know, whatever the case may be. It would be civil and it wouldn’t be under the criminal justice. But they’re not doing that either. They’re saying, no, we’re, we’re doing the will of the people. You know, we’re, we’re defining this amendment and, oh, look here, it just happened to be in our benefit.