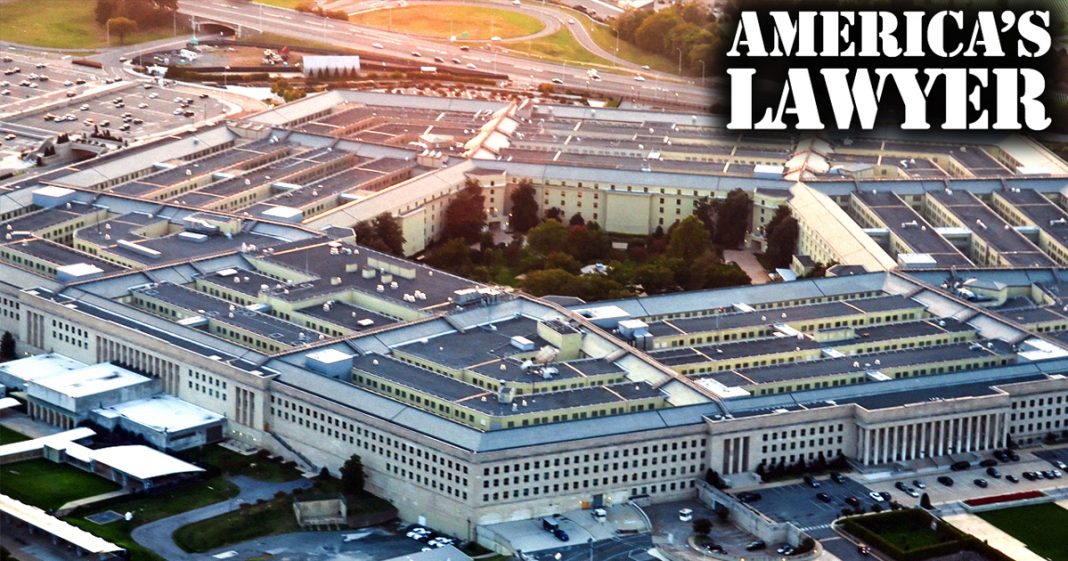 Via America’s Lawyer: Trial Magazine’s Editor Farron Cousins and Lee Camp, Host of Redacted Tonight discuss the reasons behind why Pentagon has silenced nearly 100,000 whistleblowers who have brought complaints in just the last 5 years. Farron Cousins fills in for Mike Papantonio on this episode of America’s Lawyer.

Farron Cousins:                  Not too long ago, we found out that the Pentagon is apparently really bad at both accounting and accountability when it was revealed that they couldn’t account for $21 trillion in just the last few years. Now that story likely ties into the new reports that nearly 100,000 whistleblowers from the military have come forward in the last five years only to find out that the Department of Defense didn’t care what they had to say. Joining me now to explain what’s happening is RT America’s own, Lee Camp, the host of Redacted Tonight.

Farron Cousins:                  So Lee, before we even get into this issue with the whistleblowers, I, I’m great, but listen, we actually have to go back a little bit further for a moment cause I know this is a story you talked about, the $21 trillion missing from the Pentagon. Tell us that story before we get into these, this whistleblower issue here.

Lee Camp:                              Right. So basically a, a few years ago, an economist named Arthur Skidmore came forward and said that within the publicly available government accountability reports, you could look at how many unaccounted for adjustments there were in the Pentagon’s number crunching in their, in their accounting of their finances. And there were $21 trillion of unaccounted for adjustments, basically adjustments where they say, you know, we don’t know where that money went or what, what happened with it. And he came forward and many people have tried to poke holes at it and say, oh no, well that’s not, and no one seems to actually be able to account for this, the, the, this money where it’s come and gone from. And, you know, I covered it, but not many people were talking about.

A journalist named David DeGraw shined some light on it, but now it has had articles in the Nation did an extensive thing. Matt Taibbi in Rolling Stone. Alexandria Ocasio Cortez tweeted on it. So it is starting to get some play, which means now the mainstream media and corporate media has to try and jump on it and say, nevermind that, ignore that, ignore what your eyes have shown you. And so the New York Times has attacked her, and Vox has attacked her and Cortez for, Ocasio Cortez, for saying the, for having, how dare you call attention to the $21 trillion. No one can even process that amount of money. You know, if you made $40,000 a year, it would take you over 500 million years to make $21 trillion.

Farron Cousins:                  And that’s, that’s what they, they’ve lost. And you’ve had a lot of people too that have just come out and said, no, no, no, the money wasn’t lost. It just, it wasn’t spent on the thing they said it was. Maybe there’s some accounting error, you know, go back to the George W. Bush era of fuzzy math. You know, that, those are some of the ridiculous excuses they’ve used to try to cover up the fact that $21 trillion is just suddenly gone. So now, okay, we’ve got almost 100,000 whistleblower complaints in the last five years, which is an obviously insane amount of complaints. So how many of these had been investigated, or do we even know how many have been, if any at all?

So, you know, and it kinda makes sense like when you were, when there’s this much money and manpower and, and weapons of death that are exchanging hands, flying around the world, $21 trillion going unaccounted for adjustments, you’d expect there’d be some people that are like, hey, it seems like something’s going wrong here. Why is this happening? Why is that happening? And sure enough, there are, we just don’t hear about it except hidden within the fine print of the government accountability report that came out a few weeks ago. I mean, if you were to average this out, this would be a whistleblower coming forward every six minutes of every business day for 24 hours a day, for the past five years.

Farron Cousins:                  Well, what’s really interesting to me too is that we’re, we’re not talking about an underfunded, you know, we’ve slashed all the staff in this particular branch, I guess you’d call it basically a branch of the government. We’re talking about the most heavily funded to the tune of more than $700 billion per year. And when you have, you know, as you pointed out, every six minutes, essentially for the workday, somebody coming in and saying, we, you won’t believe what I found over here. And they’re just saying, no, no, we’re good. Don’t, don’t worry about that. Don’t, don’t talk about it.

We’ve got $700 billion plus in fund money to play with and we don’t need anybody raising any red flags about what we’re actually doing with it. I mean, I think a lot of this would likely stem from either misuse of funds, you know, getting overcharged. Contractors selling us something that’s not quite right. It’s stuff we see all the time with the military, isn’t it?

Lee Camp:                              Yeah, absolutely. And you can point to specific instances that certainly don’t add up to the entirety that’s unaccounted for, but specific instances that show kind of what’s going on and why there could be this amount of fraud and corruption. For example, in the, the, the Guardian covered the, the fact that in 2003, we shipped pallets of cash to the tune of I think $13 billion. These are not ones and zeros on a computer screen, pallets of cash printed cash sent, over 300 tons of cash was shipped to Iraq to help create the new government we’re creating there and it went missing. So billions of dollars of just even like blocks of cash, shrink-wrapped goes missing in Iraq. And of course that you’d think some people that are probably like, hey, I saw guys walking off with like bundles of cash.

You’d think that would create some whistleblowers, but you can pull it to actual incidents where you’re like, well, if this is going on, clearly there is going to be, I mean, there’s an incredible level of fraud, corruption and the like. And you know, finally the Pentagon was audited this past year, 2018 they, they, after saying they couldn’t be audited, they were legally obligated for years and they never did. They always said, oh, we’ll have it soon. We’ll have it soon. They were finally audited and they came forward and they said, we have failed our audit. They literally just said, oh, we failed it and, and auditor’s millions of dollars and I think a thousand auditors or something we’re involved in this and they couldn’t figure out where the money’s going in the Pentagon.

Farron Cousins:                  You know, we, we can’t find this money. As you pointed out, 2003 we’re sending pallets of cash over to Iraq. Oops, we lost that. And we can’t get anything better than a couple of paper towels thrown at hurricane victims down in Puerto Rico. I mean this is absolutely disgusting. But to me, another thing about this whistleblower story though that really stands out is obviously recently with Julian Assange. You had everybody wanting to come out and give their opinion of Assange personally, but not necessarily talking about why the attack on Wikileaks matters, what it’s going to do for journalism.

And so this story here where we have 95,000 plus whistleblowers, who most of them get silenced, doesn’t that really show us why groups like Wikileaks are important? Cause that’s one of the few groups out there that was telling us how horrible the Pentagon is, how bad the Department of Defense is. And now we’re just letting these attacks happen on them like nothing matters anymore?

Lee Camp:                              Yeah, absolutely. They are one of the few organizations that have shown us the incredible corruption and the war crimes and the death and destruction that has wrought by are completely unaccountable monstrosity of a military industrial complex. I mean they showed us the collateral murder damages, damage where a video where, where, the there, there the helicopter pilots are just murdering Iraqi civilians and laughing about it. I mean that’s what goes on. And without Wikileaks you wouldn’t know about so much of this stuff. Of course, that is one small example. They showed us that the, the Afghan diaries, the, the Iraq war logs, the just endless examples of corruption and fraud and, and war crimes.

And it honestly, none of it would have been revealed without Wikileaks, which is why our, you know, ruling elite or powers that be or whatever knew they needed to shut up Julian Assange and they needed to really do what they could to crush Wikileaks. Because for the first time in years, our military, our military industrial complex was accountable to something. The American people were seeing what happens within our giant economy of death because this is a lot of people making a lot of money off of death and destruction and overturning of governments and collapsing countries. And it is, it’s an economy of death and we need to switch to an economy of peace. And that can only happen if there is accountability and an understanding of what is going on.

Farron Cousins:                  Speaking of, you know, economy of death, the last 48 hours essentially down in Venezuela, absolutely horrible for the country. The US is backing this coup and now we also find out within the last 36 hours that Erik Prince, the big news about him that was overlooked because they want to press charges against him, Erik Prince has actually been shopping around the idea to both the elite in Venezuela and the US government that, hey, let me send my private Blackwater mercenaries down there. A couple thousand of them do the job for you. Pay me $40 million I saw of your problem. It’s disgusting.

But this is the kind of thing that our government has been doing, and this is the kind of thing that whistleblowers are likely to come forward and say, you know what, maybe we shouldn’t have this really creepy guy who did all these horrible things in Iraq, send his private little army down to Venezuela to topple yet another regime. Unfortunately Lee, we are out of time. Thank you very much for talking with me today.