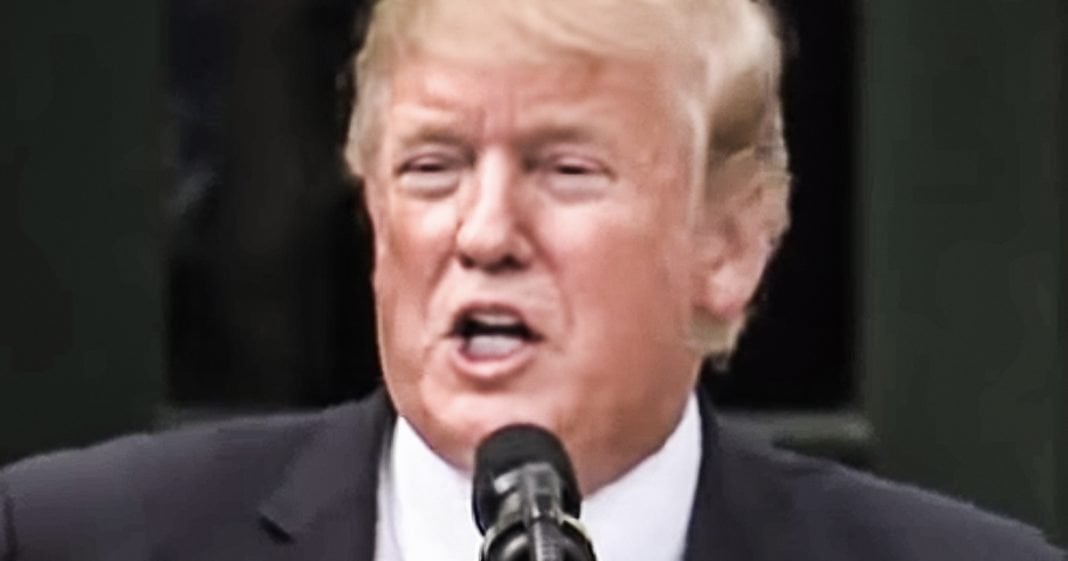 According to new reports, Donald Trump is preparing for the 2020 election by spending his days thinking of cruel and humorous nicknames for his Democratic rivals. This is what he did ahead of both the 2016 and 2018 elections, and while it worked for him in 2016, it didn’t do so well in 2018 and likely won’t even make a dent in 2020. This is the Democrat’s election to lose going against such a lightweight, but they could still find a way as Ring of Fire’s Farron Cousins explains.

If you want to know the difference between the two parties, the two major parties in the United States today. Take a look at how each party is preparing their run for president in 2020 you have Democrats on one side who are tripping over each other, trying to come out with new policies and new proposals and new plans and new platforms to show the American public how much they care and what they want to do to make their lives better. And I don’t say tripping over themselves in a bad way. That’s how crazy it is over there with them coming up with these new and wonderful policy proposals or we’re getting overloaded with policy and I love it. We have needed that for so long. And then you take a look at the republican side. So what’s Donald Trump doing to gear up to get ready? You know, young, vibrant man. How she preparing for the 2020 presidential election?

Well, according to insiders in the White House, he’s preparing for it by coming up with humorous slash cruel nicknames for his Democratic opponents that is according to people inside the White House. That’s what Trump is doing each day. He’s sitting around thinking as hard as he can, trying to come up with some kind of clever little nip nickname for every democrat that he’s running against. And we’ve already seen, he likes to call Elizabeth Warren Pocahontas and he likes to remind us that he calls her Pocahontas. Uh, you’ve got sleepy Joe Crazy Bernie and probably some other ones kicking around. Maybe he hasn’t quite perfected it, but, uh, that’s what he’s doing. He’s trying to come up with silly nicknames. And according to the insiders at the White House, this is a direct quote from them. Trump believes that if you can encapsulate someone in a phrase or a nickname, you can own them. Low Energy, Jeb Little Marco. That kind of shit really diminishes people and puts you in control of them. And that’s what Trump, Trump is a genius for doing. Uh, another source in the White House doesn’t necessarily agree that sources, Trump has a very bad sense of danger.

What the second source is talking about is you ask, confirming that Trump has spending all day thinking of stupid nicknames, but that he’s focusing on the wrong thing and he thinks he’s totally safe. He doesn’t think any of these Democrats can beat him. So he is not worried about coming up with any kind of good plans or policies or talking points. He just wants to make them look stupid. Now here’s the thing, Trump’s lying in his nickname’s in his, you know, horrible personality actually did serve him well in 2016 had he had been at another blend, milk, toast, Republican. Uh, he never would’ve broken, honestly, probably 30% with either the electoral college or the vote. It was his crass disgustingness that some of those far right people latched on to. And even the moderates at the time said, yeah, he is like this, but I believe he’ll do these things.

Well, here we are coming into the 2020 election time. He still has those far writers who like his disgustingness but then the moderates who say, who said at the time, oh well I don’t like the way he is, but he wants to do these things, which I like when now he hasn’t done those things and those people know it and now they’re getting even more agitated with the way he behaves and they don’t like it. A majority of people in this country, vast majority actually, uh, do not like the president’s behavior. They do not look at him as a role model. They do not think he is a good influence on children. They flat out don’t like it. So what worked for him in 2016 is not necessarily going to be a winning strategy in 2020 people are tired of it. Yeah, your base, we’ll never get tired of it.

You don’t ever have to worry about that. But literally everybody else, you know, 70 80% of this country. Yeah, we don’t like it and we’re not going to buy into it. We like the folks over on the lefthand side of the aisle giving us policies that are actually going to help American citizens that are actually going to give us healthcare, give everybody healthcare. That’s what we want. We don’t want a president who sits around all day tweeting about Fox News, thinking of stupid nicknames to call his opponents. Why? Because everyone in this country who’s of legal voting age is technically an adult, and I would wager that every single one of us at this point is more mature than the president of the United States.