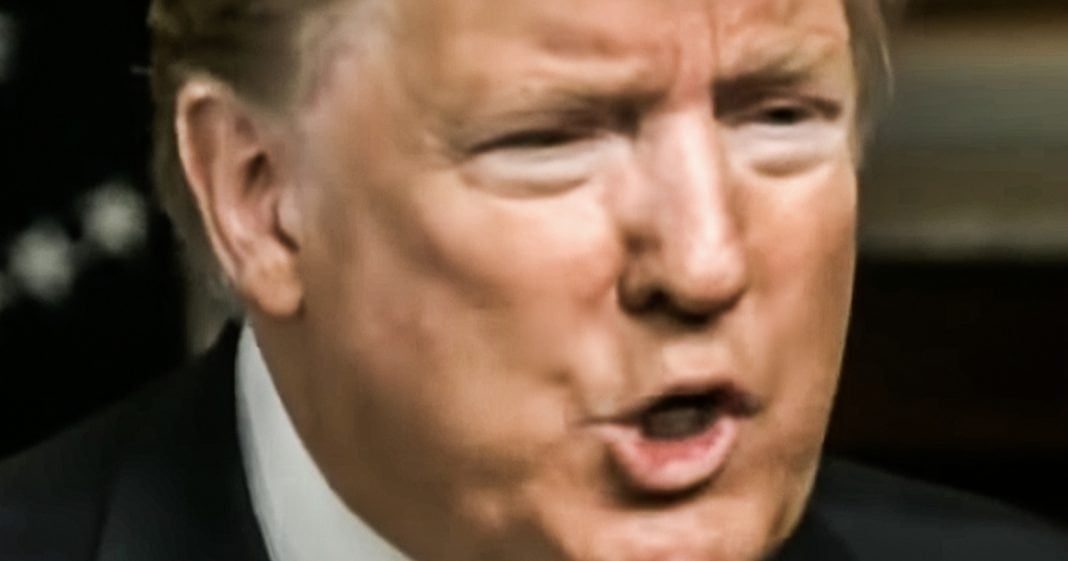 According to a new report, the US State Department has been allowing Donald Trump to break the Emoluments Clause of the Constitution by letting at least 7 foreign governments rent properties from Donald Trump in the US. These requests were supposed to be submitted to Congress for approval, but the State Department decided that this wasn’t necessary for some reason. Ring of Fire’s Farron Cousins explains what’s happening.

Apparently the US State Department has actually been helping Donald Trump violate the US constitution, uh, at every possible turn. According to a bombshell, new report from Reuters, seven different foreign governments in just Donald Trump’s first year in office 2017, uh, submitted applications to the State Department, a grand total of 13 applications, basically saying, hey, we know we’re a foreign government. We know you got this new guy that owns a lot of properties. We actually want to buy or lease or renew a lease or rent one of these properties of his, we’re trying to uphold the law here cause we got to do this. Here’s our note requesting this. Please pass this on to Congress because Congress has to approve it. That’s how you avoid any violation of the emoluments clause. If Congress approves it, everything’s A-OK. There’s no rule breaking. There’s no shredding of the constitution. Everything’s good to go. And it’s really sad that these foreign governments knew that.

And yet the president himself did not. And apparently the folks at the State Department didn’t know that either because they never sent those requests to Congress. They just approved them. And that ladies and gentlemen is illegal. So once again, we have evidence showing that Donald Trump this time with the help of the State Department, broke the law by violating the emoluments clause. This is clear as day. There is no question about this. We know now that this happened, we know the State Department did not follow the rule of law and they did not get congressional approval, but they went ahead and approved it anyway, allowing these foreign governments to rent properties, pay rent that would eventually end up back in Donald Trump’s pocket. That is in a monument that is illegal, that is a violation of the United States constitution. Uh, but again, really shocked that these other countries who happened to be Iraq, Kuwait, Malaysia, Saudi Arabia, Slovakia, Thailand, and several countries from the European Union, that they actually knew the rule of law here in the United States and they, to their credit, actually tried to do the right thing.

You know, regardless of your opinion of these countries, you know, I’m not a huge fan of Saudi Arabia by any stretch of the imagination. One of the worst human rights abusers on the planet and yet even they said, well, hold up. We got to do things by the book here. We don’t want to screw anybody over. We don’t want to get anybody in trouble. We don’t want to break the law. In this instance, we’ll break the law in every other instance in our own country and cross the glow, but not here. We want to make sure we get this property legally and we don’t get Donald Trump at any trouble and yet in spite of their best efforts, they still came up against the State Department that said, Nah, screw it. We don’t need approval. Let’s do this. What’s the worst that could happen? Well, the worst that could happen is that Donald Trump right now is facing multiple different lawsuits from different parties in different courts for violations of the emoluments clause.

One of those cases was actually just ruled on this week where the judge said, hell yeah, this thing’s moving forward. Buckle up big guy. It’s going to be a long ride. Things aren’t looking good for Donald Trump. I mean, that’s pretty obvious. It’s been a pretty bad couple of weeks for him. Ever since the, uh, Muller report wrapped up, he thought that was the end of his problems, but oh no. Things have gotten so much worse for him since then. Between the emoluments lawsuits between the Deutsche Bank and capital one, law suits that he’s filed to shut them up, the lawsuits he’s had to file against Democrats to stop them from seeking records. His attorney general now could be facing impeachment. He could be facing impeachment because his attorney general lied about the obstruction of justice evidence. Holy Hell, this man is not having a good couple weeks. And to be honest, I couldn’t think of a better person for this string of misfortunes to happen too.