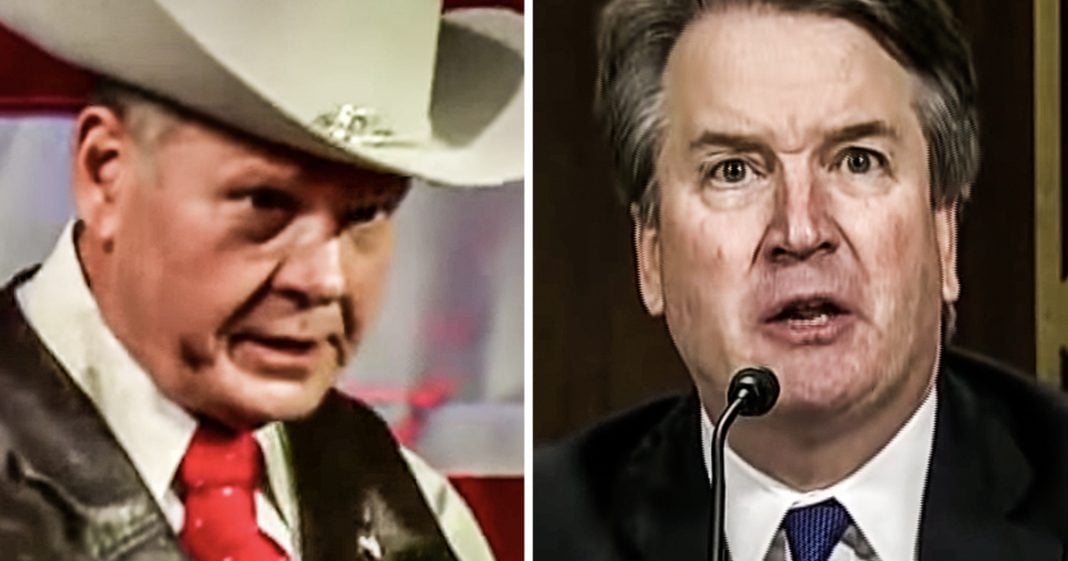 Disgraced former Alabama Supreme Court Justice Roy Moore is trying to make another political comeback, and he believes that the allegations that derailed his last comeback won’t be an issue anymore. Moore holds this belief, he says, because Brett Kavanaugh was able to overcome all of the allegations against him so why can’t Roy do the same? Ring of Fire’s Farron Cousins explain what’s happening.

For some reason. Disgraced former Alabama Supreme Court justice Roy Moore thinks that he can once again creep back into public life and run for Senate in the state of Alabama. Now, Roy Moore has, I’m sure pretty much everybody remembers, uh, did not win his last election, uh, running for Senate in the state of Alabama. He was up against Doug Jones, the Democrat for the first time a Democrat won Alabama Senate. And decades everybody was freaking out. Oh my God. Doug Jones turns out to be Republican lite in the Senate. However, he’s still better than Roy Moore, who was accused by a nine different women of sexual improprieties with these women. One of whom was 14 years old, while really more was 30 years old. Uh, it turns out Roy Moore had actually been banned from a mall in the state of Alabama because he would go there and prey on young underage girls.

And so Roy Moore rightfully lost his Senate race, but only by a few points. They don’t get me wrong that people in Alabama, we’re kind of like, ah, I don’t know if I care if a pedophile is our senator. Why not? We’re Alabama nonetheless, he lost and he wasn’t happy about it. He hasn’t been happy about it since the day the results came in. And so now he’s running for Senate again. But this time Roy Moore is confident that he is absolutely going to win. And you know why? Cause if Brett Kavanaugh can survive the accusations against him and make it to the u s supreme court, then why can’t Roy Moore become a senator? And I wish that was just an analogy that I was making up, but that is actually the analogy that Roy Moore is using in his latest fund raising email, saying that if Brett Kavanaugh drunk and Brett can make it through all those accusations and that phony FBI investigation that lasted a few minutes, if he can survive that, then hell yeah.

Roy Moore can come back to the Senate folks. Oh, he’s never in the Senate, but he can come back and run for the Senate, right? He can survive this. Uh, here’s the thing, Roy Moore, even if you were to survive the allegations against you by all of these women, you still have all your past homophobic comments all year, Islamophobic comments. And of course that paper you wrote that time that said that women shouldn’t be allowed legally to run for office. And if they do run for office, we as, as Americans, as Christians, I guess have a moral obligation to vote against them. So good luck overcoming all of that in addition to the fact that you are an accused pedophile. But sure, if you think Brett Kavanaugh can survive, so why can’t you go for it buddy? And I hope that the state of Alabama has to tell you one more time to go the hell away because nobody wants you.

On the other side of the coin, you do have Doug Jones, Doug as centrist as he’s been as many times as he sided with Republicans, which has been every given opportunity. Uh, the Republicans in the state are still going to paint him as some kind of liberal socialist, far left Antifa type, and it’s going to tank him if they put any republican up against Doug Jones who is not a pedophile, that Republican is going to win a right now they actually have two really strong as they have representative Bradley Byrne already running for Senate. And of course the former head coach of the Auburn Tigers, Tommy Tuberville, hugely popular in the state. Although even though I am an Auburn Fan, I don’t know that you’re going to get to the University of Alabama folks to vote for a former Auburn coach. I don’t think Tuberville really thought that through. Nonetheless, there’s better options out there. Hi, I’m no fan of Republicans at all by any stretch of the imagination. However, I would have to throw support behind a non pedophile republican over a pedophile Republican, which is exactly what Roy Moore is being accused of.