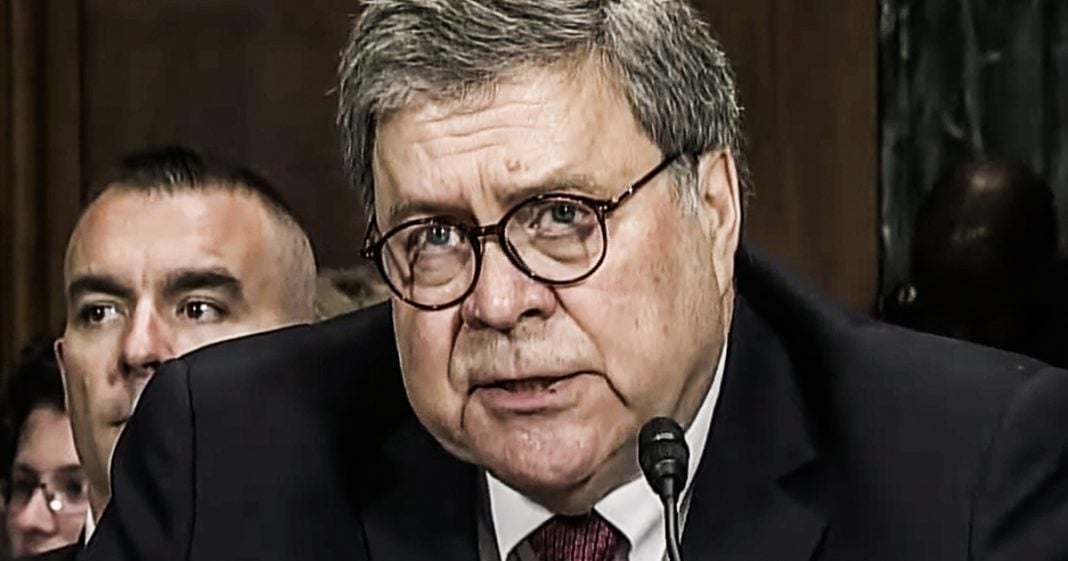 Attorney General William Barr yesterday admitted that he never actually looked at the evidence against Donald Trump before saying that they wouldn’t do anything about his obstruction of justice as laid out in the Mueller Report. This proves that the Attorney General cares more about preserving Trump than he does about preserving the rule of law. Ring of Fire’s Farron Cousins discusses this.

So yesterday, Attorney General William Barr appeared before a Senate panel, uh, where he basically lied about a lot of things, but he also did tell the truth on a few items. And one of the items that he told the truth about was during the line of questioning from Senator Kamala Harris, when she asked him what evidence he used to say that Trump did not obstruct justice to which the attorney general of the United States admitted. I didn’t look at any of the evidence. I didn’t look at any of the underlying evidence before I said he didn’t obstruct justice right there. That’s it. Like that is the only thing we needed to hear from him. You’re a hack, you’re a piece of crap and you’re done. You’re done. That right there should set the stage for William barr’s impeachment. He cleared a man of wrongdoing without ever once. Looking at the evidence.

And the reason bar gave is actually even worse than him just saying. I didn’t look at it cause he said, I was basing that on, on molars a summary of it that way. That came for Robert Mueller. He said there was no obstruction of justice. So I just assumed he was being honest and forthright. He looked at the evidence and said it didn’t happen, so I didn’t need to look at the evidence. I trusted him. So I said the thing, well, first and foremost, dumb ass. That’s not what Robert Mueller actually said. He said, I am leaving it to you to make that determination, but you being the hack that you are decided Nope to hell with it. I’m not even going to look at it. I may not even read the entire report before I put out my little four page CliffsNotes. William Barr dead exactly what he was hired to do.

There is no question about that. Donald Trump picked him one because he saw what he did back in the day for all the people in Iran. Contra got them off the hook, got them pardoned, and two, because he had already previously set a sitting president can’t be indicted, which is not true by the way. So yeah, William Barr did what he was supposed to do and now he’s having to answer for it. Unlike back in the 90s, this isn’t gonna end well for bar and it’s damn sure not going to end well for Donald Trump because now that we know this, now we know he didn’t, uh, look at the evidence before saying Trump didn’t obstruct justice. This now opens the door for the Democrats in the House of Representatives to immediately launch impeachment proceedings against both Donald Trump. And of course William Barr himself because yeah, they can impeach him too and they should.

I’m not going to join in the chorus of people anymore calling for William Barr to resign. I think resignation is too good for him. I think the man needs to be impeached and if he fails to show up today as he is likely to do, as he has said he’s going to do, then they need to send the sergeant at arms to arrest him and hold him until he agrees to testify. They also have the authority to do that. William Barr has to answer for what he’s done and after William barr’s don’t answering, it’s time for Trump to answer for what he has done. This doesn’t end well for either one of them. And I hope, and I pray that the Democrats in the House of Representatives have enough courage to move forward with impeachment proceedings against both of these men.