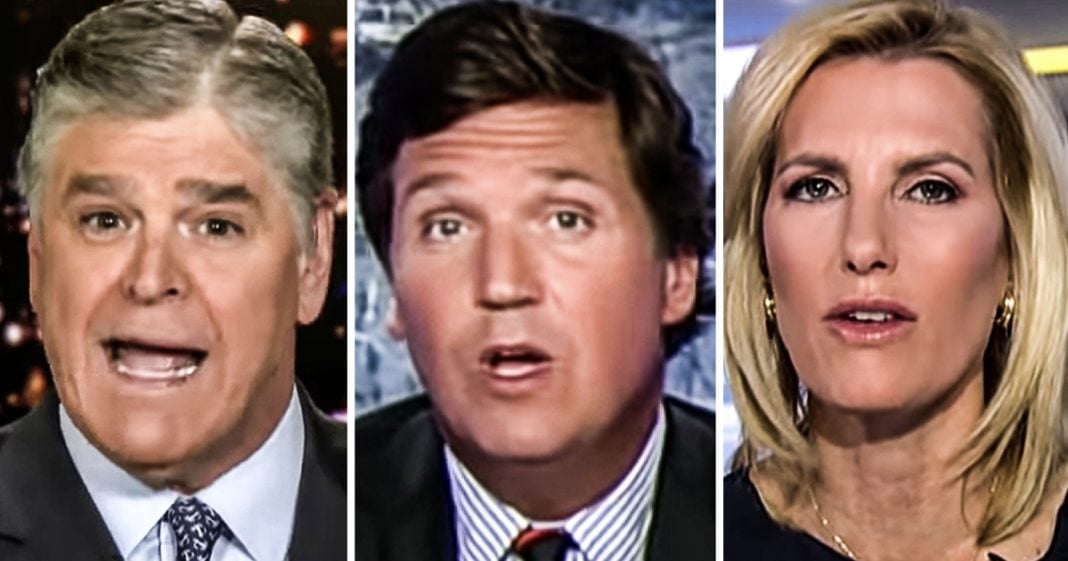 Tensions behind the scenes at Fox News are reaching a boiling point as more and more advertisers flee and shareholders are starting to see their profits fall. People like Sean Hannity, Tucker Carlson, and Laura Ingraham are scaring away the ad dollars in spite of their high ratings, and executives don’t know if they should be placating the on-air hosts or the people who actually pay their bills. Ring of Fire’s Farron Cousins explains what’s happening.

Fox News is having a really hard go of it lately. Uh, just yesterday, actually at least two major advertisers on the network announced via social media that they’re done advertising on the network. They do not want to be associated with any of the shows on there. They were shocked to find out that their ads were actually running on those shows because they didn’t buy time for that show. Fox just decided, screw it, we’re going to put these on. Tucker Carlson and Laura Ingram, the advertisers weren’t happy about it, so they said, guess what? We’re out. And this story kind of builds on the back of stories that we’ve been talking about for several weeks. Stories that have been done by Gabriel Sherman over at Vanity Fair, and that is that there is a civil war brewing behind the scenes at Fox News and it’s all because Lochland Murdoch, Rupert Murdoch’s son who is now running Fox News, doesn’t know who in the hell he’s supposed to placate.

Is he supposed to make the on air talent happy? Is he supposed to make the actual real journalists and producers happy? Is he trying to make Donald Trump happy or does he try to make the advertiser’s happy? The shareholders at the network would certainly say please for the love of God, start making the advertiser’s happy because that’s their money there. They’re starting to see less and less money come into the network. And let’s not forget that Fox News who uh, they repeatedly tell us, you know, their entertainment, it’s a business and it is the job of a business to make money for the shareholders legally speaking, whether you agree with it or not. But legally speaking, they have an obligation to their ship to those shareholders to make as much money as possible. They have to do that. So legally speaking, yes, your obligation would be to the shareholders to increase that advertising revenue.

However, in order to do that, you have to tell the host, you have to tell the Hannitys and the Carlson’s in the Ingrahams and the Bartiromos that, hey, you guys have to stop being pieces of crap. And now that would also make the reporters and the producers happy because that’s what they want. But it’s also going to piss off Donald Trump. So you see, you have this really weird square of Fox News and every corner represents something different to on air talent, the producers, Trump and the shareholders. Slash. Advertisers. You can only make two of those happy at a time. And right now we know that Fox News is already making Trump mad. He’s starting to say that, oh, they’re not as nice to me as they should. We know from reports and multiple sources inside Fox News that Hannity’s already saying, screw it. They’re being mean to me.

They’re not showing me any love. I’m out of here. When my contracts up, you know, kind of like a moody teenager, like, man, as soon as I turn 18 I’m outta here. I’m blowing this joint. But then he got the shareholders who are still unhappy because you still have the pieces of crap on the air. The advertisers starting to pull out even more so, and they’re actually terrified. Did Fox and friends is going to be the next target of an advertiser boycott. And you have the reporters and producers who are mad that the on air talent gives the entire network a bad name. So right now, every single corner of this Fox News Square is angry because none of them are getting what they want. Trump technically is and trust me, Hannity and all those idiots, they’re getting what they want but they don’t think they are cause they always like to play the victim.

But Laughlin Murdoch’s going to have to make a decision and he’s going to have to make a decision very quickly. Your network is going to start losing money and when that happens, there’s no amount of advertising that the my pillow guy is going to be able to buy it and make up for all the big name advertisers leaving your network. It’s not going to matter that Hannity gets two to 3 million viewers every night and crushes everybody else in the ratings. If you don’t have anybody willing to advertise on his show, I mean that’s why we collect ratings data to sell it to the advertisers. And those ratings won’t mean squat if everybody continues to pull out of your network. There is only one solution for Laughlin Murdoch at this point, and that is to reign in these horrible people that he’s put on the air so that has shareholders can make more money. Either way, he chooses to go, it doesn’t end well. Fox News became this Frankenstein’s monster that they don’t know how to control. They don’t know what it’s going to do. All they know is that it’s not going to end well for anybody associated with it.