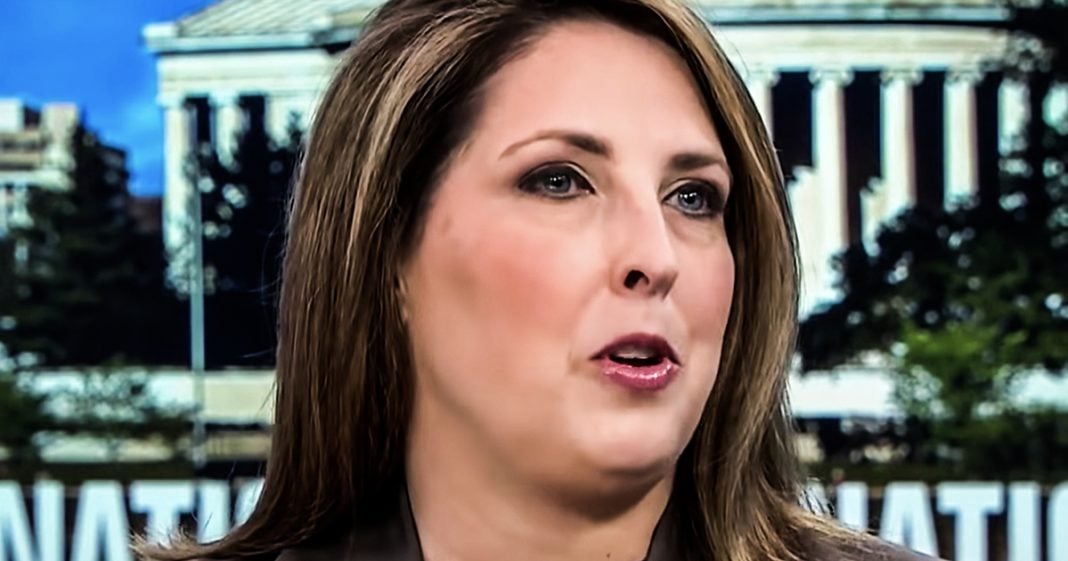 Donald Trump got in trouble by Facebook for running ads with blatantly false information about Democrats on the same day that the chairwoman of the RNC, Ronna McDaniel, tweeted out a lie that Democrats want to tax American citizens at 100%. This is their strategy for 2020 – lie their butts off, because the truth would send people running into the arms of the Democratic Party. Ring of Fire’s Farron Cousins discusses this.

You know, roughly a year before the 2018 midterm elections, the Republican Party already told us what their plan for those midterms and the 2020 election was going to be. They were going to run against the media, paint the media as Donald Trump has done as the enemy of the people. Bunch of fake news out there misleading you and lying to you. Well now it seems they’ve kind of adopted a new tactic and that new tactic is to just tell blatant brazen lies to the American public because the Republican Party has nothing else to stand on in the last two days alone. We have seen the Donald Trump campaign actually get in trouble by far from Facebook for the ads they were putting out. The ads specifically claimed that Democrats have said they are going to repeal the second amendment. Now that that’s actually not something that ever happened, but Donald Trump’s ad on Facebook specifically made that claim that was completely untrue.

Facebook made them change it because it was completely untrue. That same day, Ronna McDaniel, the chairwoman of the Republican National Committee, sends out a tweet telling us that under the Democrats tax plan, first of all, she tells us the economy is doing amazing. Everything is great, everybody is wonderful. But then she says, but the Democrats tax plan is to tax everyone in this country living above the poverty line at 100% she wasn’t joking. She literally tweeted out that the Democrats want to tax every non impoverished person in this country. 100% meaning every dollar you make goes to the federal government. That’s what the chairwoman of the entire Republican Party said on Twitter. I, this is the kind of level of stupid we’re dealing with one but two. These are the brazen lies that they’re trying to tell the public. And a lot of Republicans are dumb enough to believe it.

That’s the worst part. Not that they’re willing to tell these lies, but that we have too many stupid people in this country who will see that and say, well, damn on. Didn’t know that. Oh, you got to realize we were in Texas. All hundred proof. I’m not kidding. That will happen. That is already happening because they don’t bother to use their brains. So this is what we’re up against in 2020 it doesn’t matter at this point. Who the Democratic candidate is there going to be smeared as a socialist? I mean it could be the most corporatist, centrist Democrat imaginable and everything they say, every plan they come up with, it’s going to be smeared as some kind of socialist plot to destroy capitalistic America. All of them, every single one of them. So do not be afraid of that socialism label cause it’s going to be slapped on every single one of you.

Furthermore, new poll show that that cry of socialism, that Republicans are also pushing as part of their big lie machine for 2020 it’s not working. The voters are buying it this time like they did back in Oh eight with Obama. They understand now that Republicans are just using that as a word to scare us. They most likely can’t even define it. The Republicans and most of the Republican voters out there, so that’s not working. So that’s why they go with these other big lies like Democrats are coming for your guns. Good God. How many times have we heard that lie over the last 20 years? They had little, literally told us during the Obama administration that he was going to come door to door and take your guns. He personally, the president, who’s going to knock on your door, search through your house, take your guns and go. They told us that he had these a FEMA death camps all set up for Republicans. He was going to have death panels for grandma. It’s nothing but lies because that is all the Republican Party has. Because if they were to actually come out and say, okay, instead of lies, we’re going to tell you our plans that would sim damn near every voter in this country running full speed into the arms of the Democratic Party. And that’s why the Republican’s rely on these lies because they know that they have nothing else to offer the American public.