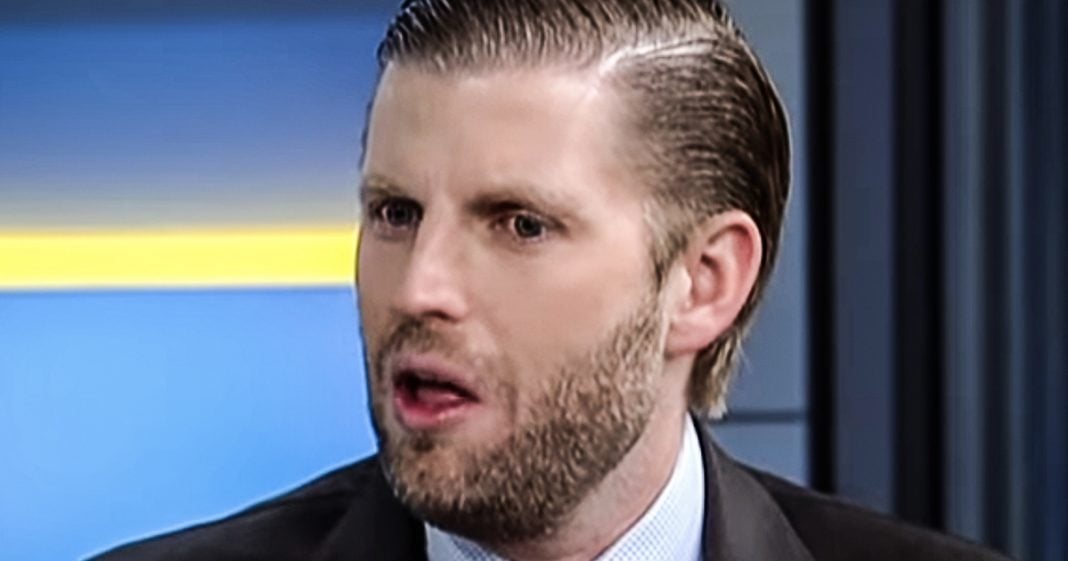 Eric Trump isn’t very happy about the fact that his family’s finances are being subpoenaed, and he used an appearance on Fox & Friends this week to let his frustration be known. But his defenses only seemed to show us how terrified he truly is and made it clear that he, his father, and the rest of his family have something to hide. Ring of Fire’s Farron Cousins discusses this.

Eric Trump the a lesser of the two. Trump’s sons, uh, appeared on Fox and friends. So on Tuesday to whine about the fact that his family has now had this sue Deutsche Bank and capital one bank in order to prevent the Democrats from getting their hands on the family’s financial records. And he was whining about the fact that Democrats don’t want to do their job. They just want to harass my father and my family ear. Some exact quotes from Eric Trump on that, a fox and friends appearance. He said this is presidential harassment one oh one. My father always talked on the campaign trail about the deep state. And this is the deep state. Before I go on, let me go ahead and clarify something there for you. Eric. Uh, deep state is actually referring to whatever that crazy conspiracy theory is that there is some kind of shadow government operating behind the scenes.

Uh, what you’re describing is actually congress, Congress. These are people we know their names, we know what they’re doing. They’re very open and up front about it. Uh, that’s not some kind of secret conspiracy. They’re telling us on Twitter that they’re going to do this. So just so you know, there is a difference between your so called deep state and elected members of Congress. So I’ll get to the rest of it to just a minute, but let’s continue. Uh, they don’t actually want to do their job. They want to, they don’t want to fix healthcare. They don’t want to fix immigration. They just want to subpoena everybody that has ever met Trump.

This is their job. Eric. I know, again, you’re really not that bright bud, but congress does have a responsibility to do this. They took an oath of office, much like your father, but unlike him, they actually want to uphold it and they want to do their job, which is oversight and yeah, sometimes investigations, they have not done a single thing that was, is with, uh, outside of the scope of the law, outside of the scope of their responsibility and their authorities. They haven’t violated anything. They haven’t overstepped anything. They have the authority to do this. And they did it and they did it because, not because they wanted to harass her father, but because Michael Cohen implicated your father in financial crimes. So they’re doing their due diligence and they’re following through on it and requesting these records to see if Michael Cohen once again lied to Congress or if he was actually being honest this time.

But here’s the thing that always gets me about this. Eric Trump, all the Trump kids, cause they’re so good at this playing the victim. Eric Trump is not a victim of anything other than obviously from looking at them very bad genetics. There’s real victims in this country. We have real victims locked in cages, separated from their families that they’re likely never going to see again. We have roughly 100 million victims in this country who are drinking contaminated drinking water every single day. We still have plenty of victims down there in Puerto Rico. We had victims of another mass shooting yesterday, you know, day or two after the last mass shooting. Those people are victims. Eric Trump is not. Congress is finally actually doing their jobs. Unfortunately for the Trump family, that job involves getting all of the dirty little secrets they had been trying to hide from us out in the open.