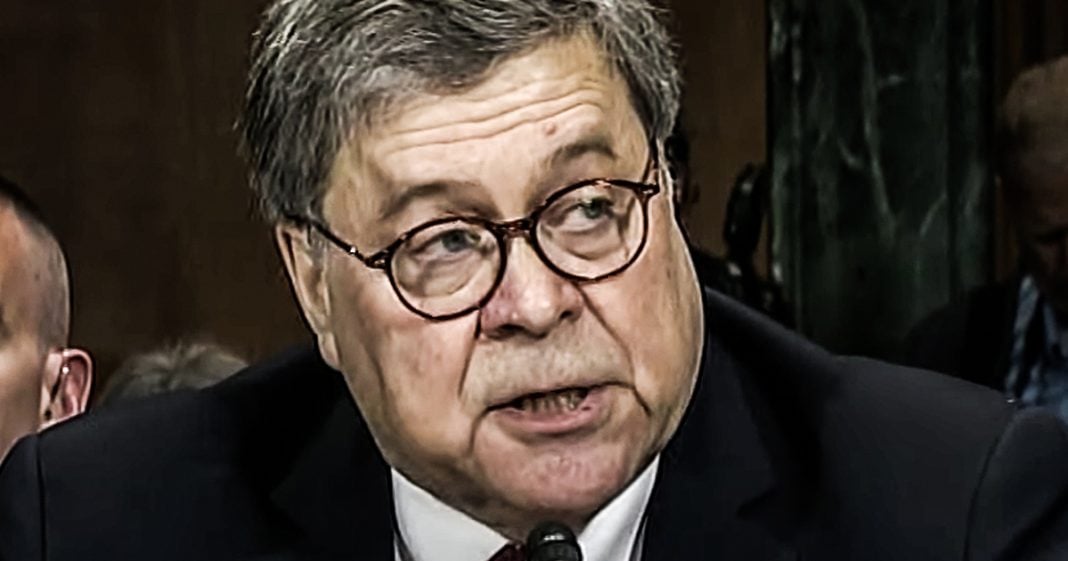 Now that it has been revealed that Attorney General William Barr misled the public with his pathetic summary of the Mueller Report and that Mueller himself told Barr that he mischaracterized the substance and scope of the investigation, prominent Democrats are telling Barr that he needs to resign IMMEDIATELY. While Barr is unlikely to do that, it would probably be in his best interest to do so as the next few years aren’t going to be very pleasant for him. Ring of Fire’s Farron Cousins discusses this.

You know, I’m actually really starting to feel sorry for a lot of the people who were doing their victory laps. After William Barr issued his four page summary of the Mueller report, then after the Mueller report came out, US specifically people like Glenn Greenwald and Michael Tracy, because in the few weeks since they started doing their victory laps, they have had to repeatedly just move the goalpost back a little further. Every time new information comes out that says like, wait a minute, you guys were wrong about this. And they say, oh, no, no, no, no, no. What I meant, no, no, no, no, no. You guys were dead wrong. And it happened again last night, which was a lot of fun to watch. These two men just completely devolve on Twitter. But nonetheless, what happened yesterday was that it was revealed that Robert Mueller, the special prosecutor had to write William Barr, the attorney general, a letter after he issued a summary telling him that, uh, you’ve mischaracterize this. This isn’t true. It’s not what happened.

And suddenly everybody starts thinking, holy crap. Did collusion actually happen? Oh my God, what’s going on? We’ll know that part of it didn’t change. But actually before we even get into that, let me, let me read exactly what Mueller said in his letter to Barr. Uh, it did not fully capture the contacts, nature and substance of this officer’s work and conclusions. There is now public confusion about critical aspects of the results of our investigation. This threatens to undermine a central purpose for which the department appointed the special counsel to assure full public confidence in the outcome of the investigations. So while this doesn’t necessarily, as far as we know, change anything on obstruction, maybe it will, oh, not obstruction. She gives me collusion. Maybe it will, I think obstruction hundred percent. It changes that. But one thing it doesn’t change is that William Barr did the job that he was chosen to do.

I mean, as everybody was saying from the beginning, the reason William Barr is attorney general today is because Donald Trump knew that he was going to get his hands on the Mueller report or Robert Mueller himself and make sure that everything went Trump’s way. And that is exactly what William Barr did. And that is exactly why we have so many people today calling for William Barr’s, resignation. Prominent members of the Democratic Party serving in Washington DC within the last 24 hours have been calling for bar to resign immediately. Uh, senators, Chris van Hollen, representative Maxine waters representative Ro Khanna representative Ted Lieu, representative, uh, or excuse me, Senator Mazie, Hirono representative Kathleen Rice. Uh, Julian Castro, Democratic presidential candidate, a former, uh, housing and urban development development secretary. Lots of people who understand what they’re talking about, who understand what’s happening, who live it. Every day up there in DC. William Barr does need to resign. And at first when I started thinking about this, I said, how Ya, obviously he needs to resign, but he’s not going to, you know, Trump picked him for a reason, but then it dawned on me that that reasons over William bars already served as purpose during his short little tenure here.

Why not go ahead and resign? Because I can promise you, given the names on this list, that I just ran out, these people that are basically saying, you’d better resign if you choose to stay. Mr. Barr, you’re going to have a very unpleasant remainder of your tenure. You are going to be subjected to subpoenas, you are going to be subjected to congressional testimony that is not going to be friendly. You are going to have to answer for everything that you’ve done in every lie that you have told the American public, Robert Mueller’s already said, he’s ready to testify, he’s up for it. He’s raring to go. But the Justice Department is preventing that from happening. They can only prevent it for so long before Congress is able to get him in there. And once they do and once they find out what exactly was in that report, once they find out what kind of summaries he and his staff had written that have just disappeared or been buried by William Barr, thing is they’re going to get so much worse for William Barr and we could be talking about impeachment for him in the very near future.

Congress has the authority to impeach him and I think bar, at least he should understand that. So if I were him, I would heed these calls to resign. Because if you don’t, it’s just going to get worse from you for you. From this point on, these people aren’t going to relent because it’s their job not to. They need to know what happened. They need to know why you lied. They need to know what you’re covering up because clearly you’re covering something up. Robert Mueller will eventually testified before Congress, and I think a lot of stuff is going to come out at that point. That one is not going to make the president look very good, but it’s gonna make William Barr look even worse because he’s the one who covered it up. Now, we may not get the answer that a lot of people are wanting on collusion, but I’m willing to bet that Robert Mueller is going to tell us without a doubt that Donald Trump did obstruct justice. And Rob William Barr is the one who covered it up for him.