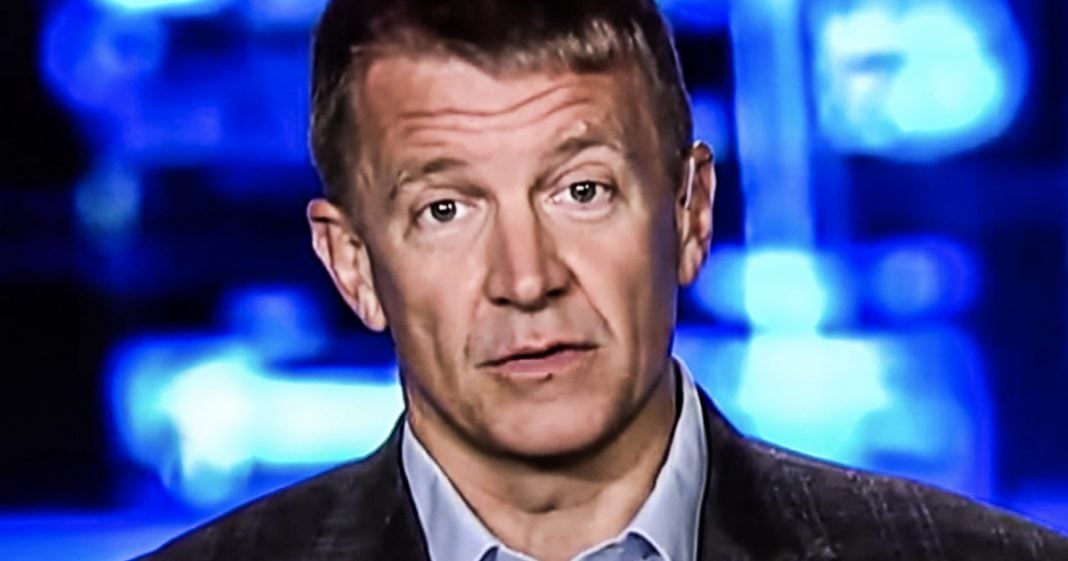 According to a new report, Blackwater founder and Trump friend Erik Prince wants to get permission to use his private mercenary army to topple the government of Venezuela. This is a dangerous idea that is being pitched to a president who is dangerous enough to allow it to happen. This administration is itching for a new war, and Prince would be more than happy to deliver it for them. Ring of Fire’s Farron Cousins discusses this.

You know, ever since we started getting more and more and more and more and more and more and more Democrats running for president, the media is focused a little bit more on the Democrats and their plans and what’s happening and which tables they’re standing on that day. They’d been paying more attention to that. Then they have what Trump is doing as president. They’re still giving plenty of coverage to, you know, the mall report, all of the, uh, rallies that he does, but they’re not talking about policy anymore. And that’s a shame because this is an administration that still, even though it’s not being talked about publicly right now, they still want to head down to Venezuela and topple that regime that they just absolutely hate. And it may happen sooner than most of us think because according to a bombshell new report, what’s been happening is that you have Eric prints, the founder of the private mercenary for hire from Blackwater, also the brother of education secretary, Betsy devoss. Erik prince has been going around here in the U S and down in Venezuela. He’s been talking to a people with access to Donald Trump here in the United States, trying to convince them to convince him okay.

To send his troops, a couple thousand of them from this private mercenary from down to Venezuela to topple the current government. And he’s also been going down to Venezuela according to this report, meeting with the wealthy elite down there in Venezuela who do not like Maduro. They would love to see him gone and replaced with the u s handpicked a horrible person. And so he’s trying to get their support. He’s trying to get the wealthy elite of Venezuela to say, hell yeah, bring in your troops, bring a new troops. We got your back. We’ll be okay with this. And what Erik Prince is plan entails, um, as I had mentioned several thousand troops going down there and the, uh, the first operation is basically going to be combat operations. So they’re going to go in there, they’re going to kill a bunch of people.

Okay. If they get their way, probably kill Maduro or maybe do a Saddam Hussein style execution of him if they capture him. And then those few thousand Blackwater troops are going to hang around and work on stabilizing the country because the US has such a good track record with that. Right? We like to just hang around and stabilize things after. Why don’t you go ask the folks over in Afghanistan and Iraq how good our stabilization efforts really are. Not to mention are unnecessary and unwinnable wars to topple people that we just don’t happen to like as I have said time and time before, I don’t care what your opinion is of Maduro down there in Venezuela because you know what? It doesn’t matter. It doesn’t matter. We are a crippling the central and south American countries with sanctions. We are absolutely destroying them economically, so yes, bad things are going to happen.

They’re going to turn to people who may or may not turn out to be good leaders, but guess what? That is our fault and it sure as hell is not our responsibility or duty or even needed for us to go down there, fire some bullets and say, well, we’re going to change things. No. If we want to help, let’s do it economically because that’s how we screwed them over. We don’t need to send guns or bullets or soldiers or troops or tanks or bombs or planes. We need to send aid. We need to help them. We need to trade with them because that is going to lift it up, going down there and toppling, yet another government isn’t going to do anything to save that country or to help the people. One of the reasons this US government wants to go down there, one of the reasons blackwater founder Prince wants to go down there is because Saudi Arabia would love for us to go over there.

Venezuela is one of the top oil producers in the world. Really their only competition are the jerks over in Saudi Arabia. You know the people who cut up journalists and then lie about it and Trump already said, hey, they buy a lot of stuff from a, Saudi Arabia does, so we’re not, uh, we’re not going to mess with them. They buy condos from me. I love him and he’ll do whatever it takes to appease them. Even if it means invading yet another sovereign country sending and private mercenaries to topple their government and then probably taking all of their oil as well because hell, that’s what the US does best in it.