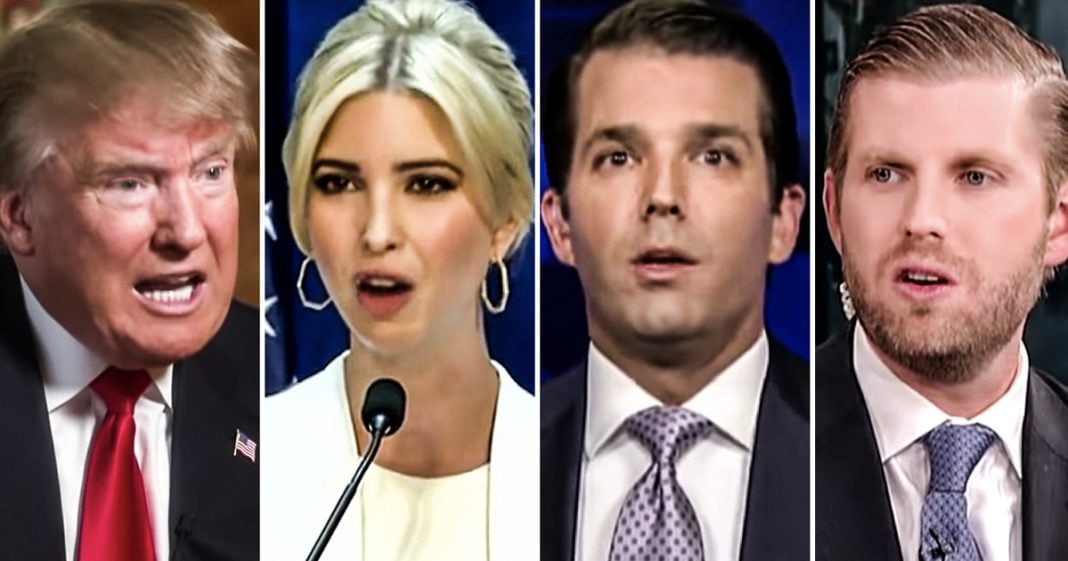 Donald Trump and his children have joined together in a lawsuit against Deutsche Bank and a few other financial institutions to prevent these groups from complying with subpoenas to turn over the family’s financial records. These aren’t the actions of a family that has nothing to hide, and the public is quickly starting to realize this. Ring of Fire’s Farron Cousins explains why these lawsuits won’t be as effective as Trump thinks they will be.

Donald Trump and his three children, Ivanka, don junior and Eric have absolutely nothing to hide from the American public. And in fact they have so little to hide from the American public that they are now suing the banks that the Democrats have subpoenaed so that they can’t reveal the family’s financial records because obviously again, they have absolutely nothing to hide, right? Because you and you’re totally innocent and you know that you have no damning info in your bank records or your tax records or any of your records, you sure as hell we’re going to sue to prevent anyone from being able to look at them. Now, if that doesn’t make sense to you, it’s because it’s not supposed to. Donald Trump and his three children are obviously trying to hide something. There is no doubt about that whatsoever. And now they’re trying to circumvent the law by arguing that Democrats in the house on both the Financial Services Committee and the Intelligence Committee, uh, are, are just trying to politicize.

This record’s grab here is an actual quote from the actual lawsuit that was filed in New York, a court here in federal court. The subpoenas were issued to harass President Donald J. Trump to rummage through every aspect of his personal finances is businesses and the private information of the president and his family and to ferret about for any material that might be used to cause him political damage. No grounds exist to establish any purpose other than a political one. And on that merit, you have already lost your lawsuit. Trump family, sorry. Sorry. You can’t write your lawsuit, your legal complaint as if it’s a tweet coming from the president because that’s not going to hold up in court. Not only do these House committees have the authority to subpoena these records and the banks have a legal obligation to comply with the subpoenas, which by the way, even after the lawsuit was filed, they’ve said, hell yeah, we’re still going to comply with the subpoenas.

Um, I don’t know if you remember this, Trump and Ivanka and little Donnie and tiny Eric. A few months ago, we had a Michael Cohen come before the House of Representatives tell us that big daddy Trump committed financial fraud and he lied to banks and he has the documents and he has the receipts. And so that, uh, is what we like to call probable cause. And that’s what this investigation is about. Had Michael Cohen not come forward and said those things? Sure. You could probably argue that this was just a political witch hunt, but he did. Probable cause exists. Other evidence already exists and there is nothing you can do. No court, you can take this to, to fight it. The House of Representatives has this authority and the Democrats control the house. Therefore the Democrats right now control your fate. But fear not. There is nothing that says the Democrats will or can even right now release this information to the public.

So that once again begs the question, what are you trying to hide? Just because Democrats on these committees get their hands on these documents, that doesn’t mean they can go and show the entire country. They can’t do that. They can bring it up in hearings. They can show it as evidence and floor speeches, but they can’t just hand these documents over to reporters and say, go have added. But your trying to hide something. And the best part is most people in this country understand that they know that you are not innocent in this matter and that if you were, you would have no problem handing over every single document you’ve ever seen in your life just to shut the Democrats up and to prove them wrong. And we all know one of your favorite pastimes is proven other people wrong. Well, here’s your chance. If you’ve done nothing, feel free to walk those documents over to the House of Representatives yourself. Otherwise look forward to a lot of losing court battles in your future.