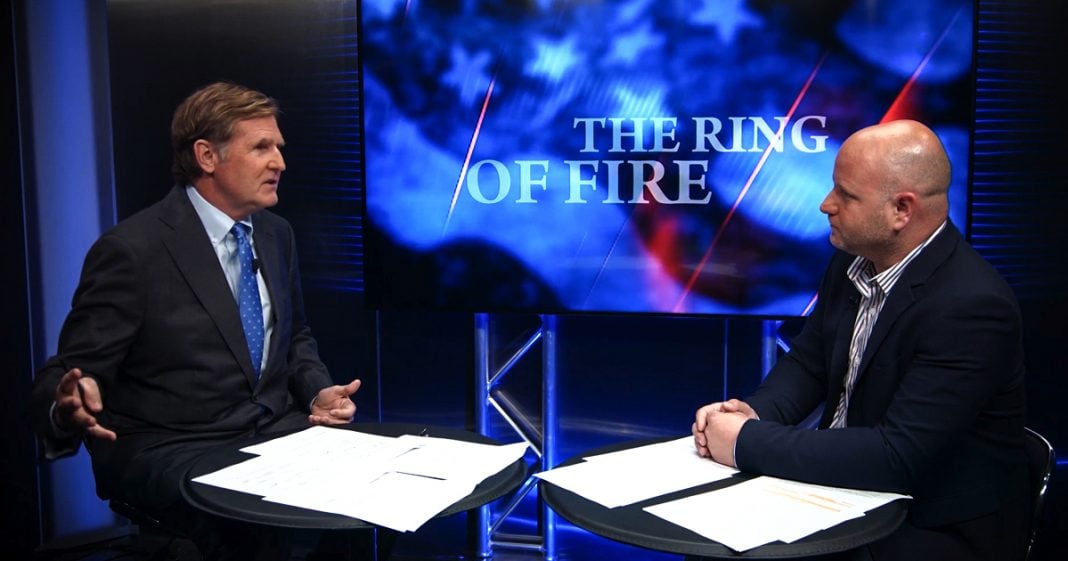 The US Supreme Court ruled that workers couldn’t file lawsuits against employers for stealing their wages. Ring of Fire’s Mike Papantonio and Farron Cousins discuss this.

Mike Papantonio:            The US Supreme Court ruled that workers cannot filed lawsuits against employers for stealing their wages and instead they have to go in front of a panel of corporate friendly arbitrators that are always hand picked by the corporation. This story’s been kicking out there for a long time, I mean you’ve got a labor policy that makes it virtually impossible for individuals to sue their employers, in other words an employer literally steals money from them. They do it all kinds of ways.

They make them work during break times. They don’t pay them for overtime. They’ve got all kinds of scams. We’ve seen very iteration you could imagine from this. So no question that the Supreme Court knows that goes on, because they’ve seen these cases. They’ve seen the facts straight up. They know the facts of McDonalds, they know the facts of … I mean I could go on forever, these industries that … Walmart, all of the companies that have these scams where they virtually steal money from employees.

No difference than going into their locker and taking money right out of their locker. But we have a Supreme Court that says, “well gee wiz, we should be able to allow them to go in force in a class action mode and say you’ve stolen from us. We want our money back.” What is your take on this case?

Farron Cousins:            What’s interesting about this case is that it really does bring to light two important issues that people often gloss over. One is the wage theft issue, and the other is the forced arbitration, both of which are huge problems for consumers that honestly until the Supreme Court case came out, I don’t think I’ve heard anybody in the corporate media ever talk about this. We have talked about wage theft, you and I for years now, and we know how it works as you’ve said.

They don’t pay them overtime, they make them work off the clock. They reclassify them is one of the big things they do. They’ll say, “Well you’re actually, even though you work and you do the same job as somebody else, you’re a manager, even though you have no authority, so therefor you are not entitled to any overtime pay whatsoever.” Just weird little tricks like that.

Mike Papantonio:            Well let’s talk about why the corporate networks, MSNBC for example, they got caught. I mean they got caught. They had people working for nothing. “Oh come work with Rachel Maddow and Joe Scarborough and we’re not gonna pay you, which really not gonna benefit your career, but come work with us.” And they had these kids working crazy hours for nothing, and so that would be an issue that they certainly wouldn’t do a story on it, and they certainly did no stories on that type of thing.

So there’s that part of it, and as you point out, this arbitration black hole that’s developing across the board. First of all, explain arbitration a little bit. I know you’ve written a couple stories on it. It is just nothing but a black hole for consumers.

Farron Cousins:            Right. What it means is you know whether it’s with an employment contract or a cell phone or credit card, home loan, you agree to go instead of being able to sue, you’re giving away your constitutional rights, you have to go in front of this arbitrator who is the sole decider of this case. Whatever that person says, and this arbitrator in almost every instance when you sign the clause is picked by the company.

Mike Papantonio:           Yeah well when you just looked at across the board, consumer issues, it was 70%, now it’s moved to 90%. It’s gonna get worse. But what needs up happening is they find these trolls. They find these characters that come out of industry that maybe worked for them in the past or they go to universities and they get these professors that are making a $150,000 a year and they want to make $400,000 a year so they get on the arbitration train.

In this case the point is this: an individual cannot go toe to toe with a corporation by themselves in a case like wage theft. If they’ve only had $20,000 stolen from them, it’s gonna cost them $200,000 to go to war. So what was in place was class action where you could have 20 of them get together, 30 of them, 100 of them get together and all say, “We’re gonna do this together. We’re gonna bring a class action against you.”

That the economy of scale made sense then. It actually worked. And so the Supreme Court did the bidding of corporations again, the same folks that you’d imagined would make a decision like this. I mean there’s never any surprise, is it? You can take a look at who wrote the majority opinions on this. It’s Roberts, it’s Anthony’s … It’s Kennedy, it’s Thomas, it’s Alito.

Mike Papantonio:            Gorsuch. There are no surprises here. They come from corporations. Kennedy, who cares if the guy retires or not? We have this notion that Kennedy’s this great swing vote for liberals. That is ridiculous. Kennedy has been nothing but a punk for industry since he’s been on the court.

Farron Cousins:            But he’s nothing more than another one of those socially liberal, fiscally conservative types who’s gonna go with corporations all the time, but you know what, let’s add a little point here, because again, we’ve researched this to hell and back. There was one arbitrator from a story that we’ve covered in California. She was hearing over 60 different cases per day, so on average, she spent about six minutes with each employee trying to arbitrate.

94% of her rulings went back to the company. So you get six minutes. You have to hire a lawyer, you know and if we’re only talking about $1000 or $5000 stolen from you here, you’re losing money on this even if you get your money back from the company.

There’s no way an attorney can even spend the time taking that to court for $50 lost in that hour, even if it’s 500 or 5000, the numbers don’t work. So here you’ve got the industry realizes this is a ticket to steal. The US Supreme Court has now said to us, this punk majority that we have that are nothing but an extension of corporate America, they have now decided that yeah, we’re gonna give you that ticket. Go ahead and steal, because the chances of you really having to face any problem are almost nonexistent.

Farron Cousins:                  You know, and it’s interesting too, to take this back to the media angle. The reason we’re not seeing any of this on MSNBC or CNN or Fox or any of the other ones is because the same companies that are out there stealing wages from employees…

Mike Papantonio:             People, why do people miss that? Why do they miss that? Why do, why don’t they understand that they look at MSNBC and you see Boeing advertising missiles like you’re going to go buy a missile from Boeing. They, the reason Boeing is advertising on MSNBC is because MSNBC is a, a management group of schmucks who don’t want to tell any news. What they want to do is collect as much advertising. Phil Griffin is the schmuck of all schmucks.

I got to tell you something, this guy, if you ever take the time, really take a look at Phil Griffin, the guy that makes decisions at MSNBC. It’s all about money. I don’t know if you know this story. One time I was actually on the air with MSNBC. I was talking about a product that had arsenic in it that they were using in children’s playground. It was called some yellow wood or something.

Mike Papantonio:             And so I had brought a case against yellow wood because they were making playground equipment that had arsenic in it. Kids were playing on this playground equipment. So I sue the company, so I’m on, I’m on one of their shows and I start talking about this, this case, I have the facts right in front of me. I have the documents right in front of me. So all of a sudden I end the show that night. I go on vacation, I’m somewhere up in North Carolina. I get a call from Joe Scarborough. Oh, he’s so upset that Phil Griffin is mad.

Phil Griffin is mad that I told the truth about this company. So they said to me, we want you to come back on and recant or apologize, says, no way. It ain’t happening. I’m not going to do it. You won’t see me, have Joe Scarborough go on the air and apologize. I didn’t do it. But then they had the, they had the PR guy for yellow wood or whoever come on.

The guy is just a classic, classic PR bottom feeder, total bottom feeder. Just absolutely lie after lie about what was represented the night before. So, so how do you expect a company like that to tell the truth? To actually blow the whistle on what’s happening to workers when they’re losing money, being stolen from through things like arbitration.