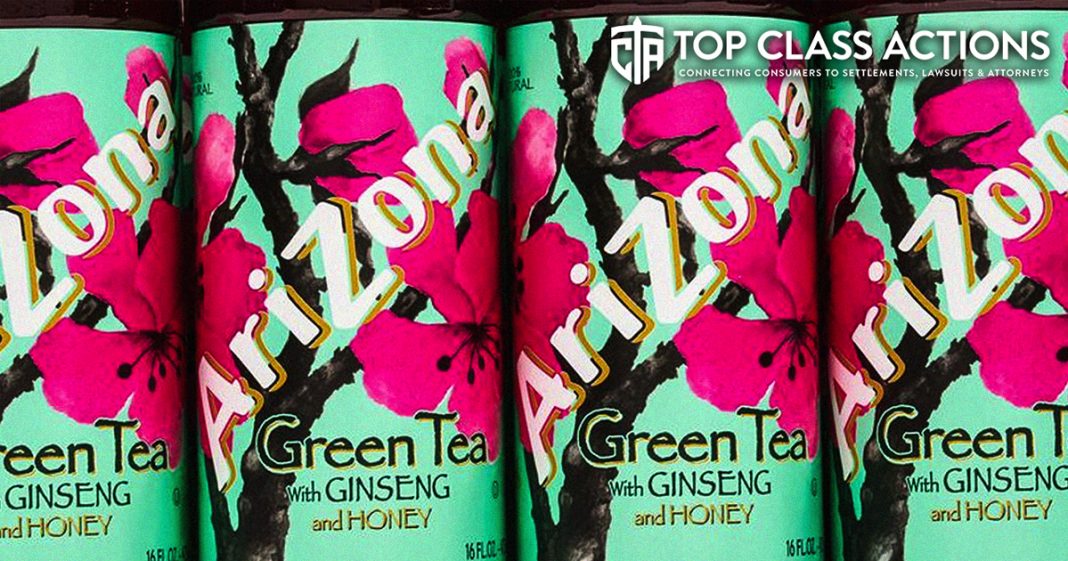 A recent class action lawsuit claims that AriZona Green Tea with Ginseng and Honey doesn’t actually contain ginseng despite its marketing. Ginseng has been traditionally used in Chinese medicine and is believed to help with energy levels. With the rise in holistic medicine and herbal remedies, the price and demand of ginseng has reportedly increased exponentially. According to the AriZona tea class action, the increased price of ginseng prompted AriZona to “use a miniscule, scientifically undetectable amount of ginseng in the product (or to entirely omit ginseng from the product), to increase [its] revenues.” Ring of Fire’s Farron Cousins discusses this with Scott Hardy from Top Class Actions.

Farron Cousins:                  For those of us a little bit old enough to remember ginseng is not necessarily always been something that you see in products. In fact, it was around the mid to late nineties that you started to hear all about ginseng. There were news reports on it. It’s this, you know, kind of miracle herb that was going to do a lot of good things for the human body and as such more and more and more products began to add ginseng to it.

They wanted to hop on the bandwagon, get people buying their products and it worked. One of the people companies who, who jumped on this was the AriZona tea company, very popular tea company, but according to a new class action, the price of ginseng has gone up so much that AriZona tea isn’t really even including any ginseng in their actual ginseng tea. Joining me now to talk about this is Scott Hardy from Top Class Actions.

Scott, I’m going to let you lay this out, but I have to say something real quick that our consumers need to know that I found out about on Top Class Actions. The cost of ginseng is more than $1,000 per pound. 16 ounces of ginseng is going to cost you more than $1,000 and I say that because it provides a lot of context for, for anyone who buys these ginseng products. If you’re not paying $50 or more per product, you’re probably not getting a lot of ginseng in it. Right?

And I think especially now as we’re coming back and people are trying to get off of diet sodas and they’re trying to be healthier, they want to get their energy from something that is deemed natural and ginseng is a great, a great way to do that. But unfortunately you have some people that went ahead and took a look at this and said, well ginseng is $1,000 a pound. AriZona ice tea is $2 a can, how are they going ahead and putting it in there? So they run their tests, they send out the AriZona ice tea to a laboratory.

The laboratory takes a look at it and looks for ginsen, ginsenosides and those are some of the ingredients, the chemical compound found in the ginseng root and they looked to see if that was in AriZona ice tea and unfortunately for AriZona ice tea, if there was once ginseng in it, somehow as ginseng has increased in price, they couldn’t find any of that chemical with in the AriZona ice tea itself, which makes us think that there is actually no ginseng in there. If they could do this test and there’s not one itsy bitsy little bit of ginseng, nope, you’re just getting super yummy ice tea, but apparently no ginseng.

Farron Cousins:                  And it’s not like AriZona’s out there marketing this tea like, hey, you should buy it, it also contains ginseng. It’s you should buy it because it contains ginseng. The, the, this is how they’re marketing it. This is how they’re getting people to buy it. This is part of the reason why people choose that particular tea. They want that specific ingredient in there. So they’re buying this under the impression that they’re getting this a root that is $1,000 per pound, paying $2 for the tea and only to find out, according to the studies, the science itself, there’s none in there.

And I’m willing to bet, you know, based on what we see here, probably a lot of other products too. If they’re selling for only a couple of bucks, you’re not getting ginseng in any quantity, that’s really going to do anything for your body. I mean, this stuff is crazy expensive. So spending two, three, $4 on something that allegedly contains it probably a little too good to be true. Right?

Scott Hardy:                          Right, and I think that, you know, you’ve got people that are saying, hey, I want my ice tea, I want to go and get that extra little kick and I’ll take that ginseng with it. That’ll give me the extra boost that I’m looking for and it’s just not there. And so either AriZona ice tea is going to have to start putting ginseng in their drinks or you might see a little asterisk on there saying ginseng flavoring added, but no actual ginseng root. We’ll see.

Farron Cousins:                  Essence, essence of ginseng I guess. But also there, there is a bit too, cause people probably do drink this product as well as others and they say, wow, I feel more energetic, I feel peppier. You have a little bit of a placebo effect in there. People think they’re getting this, they think it will do this and so they essentially force it to do this. But part of that also comes from the fact that this has caffeine in it too. And Caffeine is going to give you that short burst of energy so people could easily be mistaking, no, I’m on a ginseng high, it’s actually a, a caffeine high and a sugar high as well. Cause there’s honey in this, according to the label.

I don’t know. I mean we could probably do tests on it and maybe there’s not actual real honey in it too because you and I have talked enough about these corporations to understand that just because it’s on their label, that really is no indication whether or not it’s actually in the product. But this one, again, this seems pretty cut and dry. I mean, they’re using it as part of their marketing. People are paying a premium to buy a product that has something allegedly in it. They find out later it’s not. So I imagine we’re probably going to see something come of this. I, I don’t know how the company argues with the, the science on here.

Scott Hardy:                          Yeah. I think we’re going to see, see more of this right now. This doesn’t actually represent states other than, it looks like California and New York right now. But we already have almost a thousand comments on this one. I’d be very surprised to not see this get certified nationwide within the next few months. So it’ll be, it’ll be big and we will hear more from AriZona ice tea. Hopefully at a minimum we’ll get a whole bunch of coupons for more of the yummy tea because I used to drink the heck out of this stuff.

Farron Cousins:                  I’m sure a lot of people do as well and if you happen to be one of those AriZona Green Tea with Ginseng drinkers, make sure you follow the link in the description of this video. Head over to topclassactions.com and while you’re there, sign up for their newsletter. Stay on top of all of the issues that matter the most to consumers. Scott Hardy with Top Class Actions, always a pleasure talking to you.