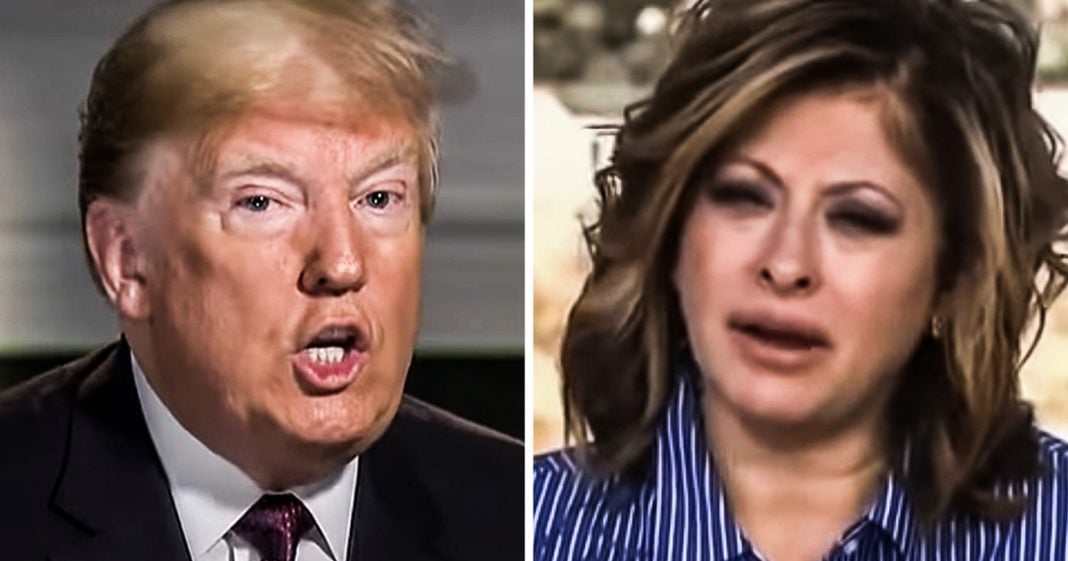 On Sunday morning, Donald Trump called into Fox News during Maria Bartiromo’s show to complain about the fact that he isn’t allowed to separate families at the border anymore. Trump claims that his family separation policy was keeping people from coming to the border, but now that he can’t do it things are getting so much worse. None of this is true, but the truth has never been known to get in the way of one of Trump’s talking points. Ring of Fire’s Farron Cousins discusses this.

Donald Trump is angry, but Donald Trump has always angry. But on Sunday morning, Donald Trump got so angry, I guess while watching Fox News that he had to call Fox News and talk about how angry he truly was. A, the person on the air at the time was Maria Bartiromo and Donald Trump was mad about immigration. He wasn’t mad at Fox News. He was mad about immigration, mad that the Democrats wouldn’t let him set separate families anymore, that the courts won’t let them separate families. Here is what he had to say to Bartiromo during his angry phone call to Fox News. We go out and we stopped the separation. The problem is you have 10 times more people coming up with their families. It’s like Disneyland now, you know, before he had get separated. So people would say, let’s not go up now you don’t get separated. And you know, while that sounds nice and all, what happens is you have literally you have 10 times more families coming up because they’re not going to be separated from their children.

So Trump is mad that the court system won’t let him take kids away from their parents. He’s actually angry about this and he’s lying about the effectiveness of his plan to begin with. Let’s get that right out of the way. There is absolutely no empirical data or evidence that backs up his claim that his family separation policy prevented people from coming up. I mean, hell, we knew we had family separation policies, but hasn’t he been warning us quite literally every six months like clockwork that uh, we’ve got a caravan coming up, big old caravan, 5,000 people, 10,000 people. This latest one that he just told us about a few days ago, he says it’s 20,000 people because they always get bigger over time, right? Just like his lies. We weren’t scared enough of 5,000 people come and so then it was 7,000 then it was 10,000 hell now it’s 20,000 and according to him, they’re all coming up here because they know they’re not going to get separated.

This administration is lying to us every single day about immigration. That’s not to say that there’s not an issue with it, but it’s nowhere near what they’re trying to tell us that it is, and none of their policies have done anything to help with immigration. It’s not stopping people from coming up. Instead, what they’re doing is they’re trying to outlaw asylum. They’re separating families. Thousands of children still not reunited with their parents and a judge last week just gave them six months to find the parents of all these children, which is going to be impossible because they’ve admitted that some of the parents already got deported.

They didn’t keep any paperwork. They don’t know who’s who or what’s where. Joy, it’s not even going to be possible. These kids are likely to be separated from their parents forever. Okay, but they don’t care. Trump wants to separate even more because in his delusional mind, it actually worked, even though it didn’t. He bragged this past weekend, actually the day before, calling into Fox News with Ren said it was my sick idea. He called that he’s sick. I did minute. It was a sick idea to send asylum seekers to sanctuary cities. Something that the sanctuary cities have said. Okay, sure. Yeah. We actually don’t have a problem with that and Trump acts like, whoa. I showed them what the hell happened to us as a country. Seriously.

Okay. How did we get to this point to where we think that we’re the best that were good the way we are and that we shouldn’t let other people into this country, Huh? Are we that fearful and stupid? Did we honestly, as a collective buy in to his lies about ms 13 coming up, you know, the coyotes with guns that he says exists out there. We have to be better. We have to do better. We have to educate ourselves again, we have an immigration problem in this country, but majority of people in this country also say, let them in because we actually need them. Our economy is dependent on immigrants on immigration.

Yeah. And the more Trump goes down there, threatens to close the border. He’s got his little national emergency. Okay. The more our economy suffers, people are not making their way up from Guatemala coming to the United States so they can kill people. They’re coming up here because they want a better life. Okay.

This country used to offer that for them. Hey, come in. Okay. Get to work. Start paying some taxes. Get your kids in school. Yeah. Take these tests, become a citizen, and here you go. Now you can vote as well. Yeah. That’s how things used to work until we had morons like Donald Trump and the modern day republican party tell us that, oh no, all these people are coming up because they’re going to steal your job, or worse, probably murder you in your sleep. We don’t know which is which, but we do know that you average American citizen are going to be the one that pays the price for this. That is not true. That’s never been true, and it’s never going to be true. But that will never stop the Republicans from telling you that that is the new reality.