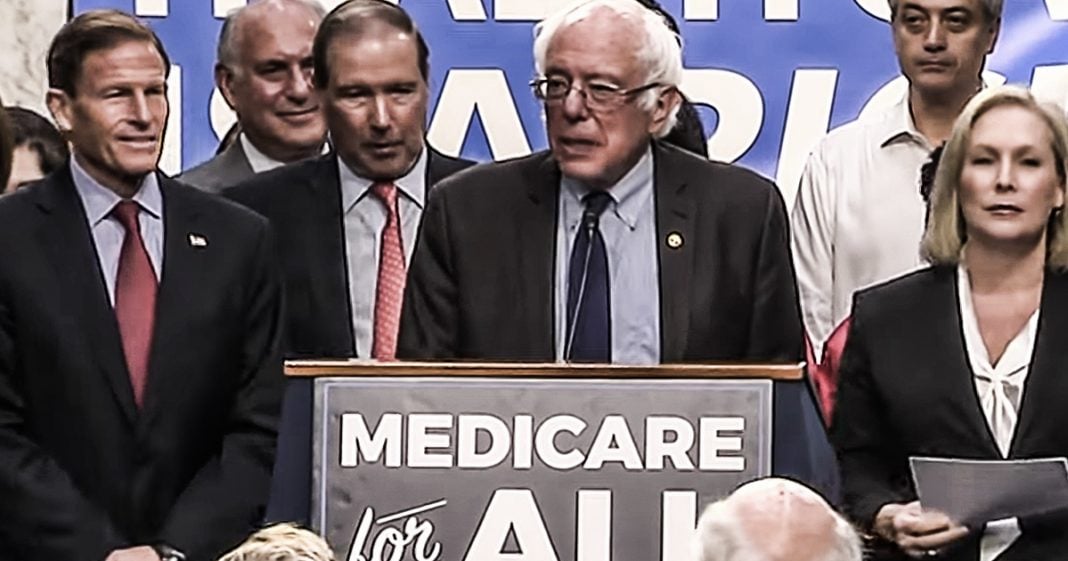 If Democrats really want to beat the Republicans in 2020, there is only one way to do it – They have to run on a strong, affordable healthcare system that covers all American citizens. That option is Medicare For All, and the American people are ready for it. Republicans have no plan on healthcare and voters understand that, according to the latest round of polling, and Democrats can seize this opportunity to secure a victory in 2020. Ring of Fire’s Farron Cousins discusses this.

The Democratic Party right now, at least a good handful of some of the candidates have some really good plans on how to move this country forward. I mean, Elizabeth Warren every other day at this point is coming out with a well detailed plan on how to accomplish what she wants to accomplish. We have other candidates out there, Bernie Sanders leading the charge on issues like Medicare for all. Okay.

Other candidates are little kind of milk toast on. Some of these things may be there for them. Maybe they’re not, they’re not 100% sure. They just don’t see how it’s feasible. Hell, we’ve got Andrew Yang out there too, by the way, pushing for universal basic income here in the United States, but with all these plans and and they are some really great plans here. There is one issue that Democrats absolutely need to put front and center and that issue is healthcare. That’s it. And I’m not even saying that that is the most important issue. I’m saying that’s the one that Democrats have to put at the front because I do believe that healthcare is one of the most important issues. But we also need a candidate that is going to be stronger than acid with regards to combating climate change and protecting the environment. That to me is absolutely top of the list with healthcare coming in at not even number two, probably one and a half. It’s so close to climate change, but without fixing climate change, literally nothing else will matter in the future. So anyway, the reason I say that we have to put healthcare over climate change in talks is because that is actually what the public wants by a 17 point margin. People say that Donald Trump’s stance on healthcare makes them not want to vote for him. In 2020 40% of people compared to 23% of people say that, hell no, I’m not voting for this guy because he’s awful on healthcare.

There’s your winning issue, democrats, healthcare. Now that doesn’t mean that you just get to go out there and talk about how Donald Trump sucks on healthcare. That’s not good enough either. What you have to do is go out there and say, listen, healthcare in this country is awful. The private sector, the hospitals, big Pharma Insurance Companies, we’ve given them decades to fix the problem. They have failed, they failed, and we’re private. Industry fails. The government always steps in. We did it when the big banks failed, gave him a couple trillion dollars. We did it when the auto industry failed. We did it when the farming industry failed because of Trump’s trade wars. That wasn’t their fault, but we still help them and now the healthcare industry has failed the American public, but we give the health care industry bailout. We should give the American public a bailout. It’s time to stop rewarding companies and industries and sectors that fail.

Give it back to the people and that’s exactly what Medicare for all would do and that is what the Democrats need to talk about. The people in this country, broad majorities of every single party want this. They want this poll show that people don’t want to vote for Donald Trump just because of his stance on healthcare. Republicans are so backwards on healthcare that they had to come out publicly and say at the beginning of April that we suck so hard at healthcare. We’re not even going to bother coming up with a plan, and so after the next election, I, they’ve only had 10 years to come up with a plan, but now they’re telling us to do. Even that wasn’t long enough. Give us another year and a half vote for us again and then we’re totally going to have a plan for you. They won’t.

Their plan’s going to be more of the same. Try To repeal the affordable care act. Kicked tens of millions of people off their health insurance, no longer cover people with preexisting conditions. Make all of our premiums rise. Do nothing about rising costs of drugs in this country. Even though the government subsidizes most of the research and development and then their ego. That’s the Republican plan or vote for one of these Democrats out there saying, we need medicare for all. That’s what we’re going to do. We’re going to give every single person in this country healthcare coverage. That’s it. That’s what we’re going to do. And according to the Koch brothers, it’s going to save us $2 trillion over the next 10 years. It’s an economic winner. It is a humanity winner. And I guess more importantly for those running for president, it is an electoral winner. Democrats want to prevail in 2020 put healthcare front and center, because that is what the American people want. That is the issue they most want fixed. And that is the issue that Democrats are in the lead on. Specifically those Democrats who are pushing for Medicare for all.