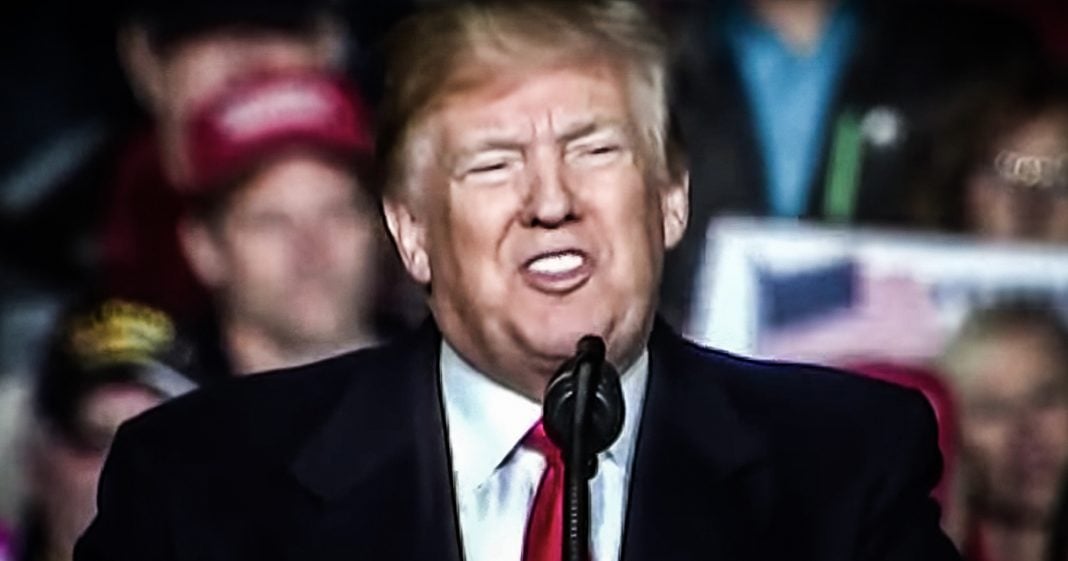 Calls for civility are absolute garbage. After years of false but unrelenting attacks from the Right, Democrats need to understand that their “let’s all play nice” mentality is not going to defeat the Republican Party. And as Democratic candidates are pitching their feel good version of American politics, Republicans and Trump are spreading hateful smears that are riling up their angry base. Ring of Fire’s Farron Cousins explains why “feel good politics” isn’t going to defeat Trump or the Republicans in 2020.

This past weekend, Donald Trump traveled to Wisconsin to deliver another one of his, uh, hate rallies. And during the rally he said the following, he said, the is born mother meets with the doctor, they take care of the baby, they wrap the baby beautifully. Then the doctor and mother determined whether or not they will execute the baby. Now he was obviously talking about some of these misconstrued abortion bills that are going around this country. Uh, this doesn’t happen by the way, what Trump is describing here, it does not happen. This is an absolute lie. He is not the first republican to peddle it and he certainly won’t be the last. But the reason I am even bringing that up is because we have too many people on the left who are still calling for civility. Let’s be nice. Let’s make 2020 a campaign about feel good politics. Let’s embrace one another. Let’s hug, let’s sit down by a campfire and sing Koombaya and just get along with these Republicans and you know, be nice and reach across the aisle and I’m sure they’re not going to slap my hand. The second I reach across that aisle, right? They will. They will every single time feel good.

Politics are not going to defeat Donald Trump or any republican in the 2020 elections. They won’t. We’ve seen that all too often. It doesn’t happen. Hell, even Obama’s former advisors, several of them have come out and said, hey, democrats don’t try to work with Republicans. They’re going to screw you over. They will never get along with you. They will never give you what you need or what the country wants. Do not even attempt to do it. And yet we still have several candidates out there peddling this feel good version of politics. Even when we have the commander in chief sitting there telling us the Democrats want to kill the babies after they’re born, you know, institute I guess infant death panels to go along with Sarah Palin’s claim of death panels from many, many years ago. And that’s another point. Stop trying to play Nice with these people. Stop thinking that there is any kind of rational conversation to be had with these people. They are not arguing in good faith. They are not debating in good faith. They never have and they never will.

Civility is dead and that was a long overdue death because Republicans haven’t practiced civility in this country in decades and it’s time for Democrats to stop pretending that we can reach these people, that we can work with these people or that we even owe them the basic niceties that we extend to other people, and I’m not talking about your average work day republican out there who just occasionally follows. Those people are fine. I am talking about the people in office right now because not only is Trump out there telling us the Democrats want to kill babies. We had Dan Crenshaw and Ted Cruz both this weekend after yet another mass shooting

come out and attack representative Omar and somehow blame her for that. They’re attacking her. This woman is getting death threats every single week. In fact, she’s gotten so many that staffs are now having a, not just her, but they’re, they’re stabs or having to go through special training because they’re getting so many death threats because of what Republicans are doing. They’re misconstruing her criticism of lobbyists into being antisemitic and now people want to kill her and that’s 100% on the shoulders of Republicans. So tell me again why we need to play Nice with these people. Why we can’t yell at them, why we can’t call them names, why we can’t call out their bs when they spew it. That’s not how this is going to work. They are actively trying to get a democratic member of Congress murdered. That’s what they’re doing.

And anyone who says we should play nice with them doesn’t deserve to even talk about politics anymore because you don’t understand what’s happening. You don’t see what’s happening or you’re choosing to ignore it and pretend that it isn’t happening either way. That’s a dangerous mentality to have. They say we want to kill babies. They’re blaming a representative Omar for what happened this past weekend. They attack. Any Policy Democrats have, even if it’s a centrist one, is socialism again coming through, uh, the debate without good faith, without actual facts, without actual rebuttals, just blanket name calling and crap like that. Sarah Pailin again back in the day, said they had those a death panels with Obamacare to determine whether or not your grandparents were going to live. They said that Democrats were creating FEMA death camps for conservatives. Um, just all kinds of horrid things that these Republicans have been saying for years. It didn’t originate with Trump. It’s getting worse with him sitting members of Congress actively accusing a woman who had the audacity to criticize lobbyists have somehow sparking in mass shooting this past weekend. What more evidence do you need? Civility isn’t going to work in any anyone out there peddling civility or peddling play nice with these people and don’t be mean to them is absolutely wrong and is leading the Democrats down a path of defeat for 2020.