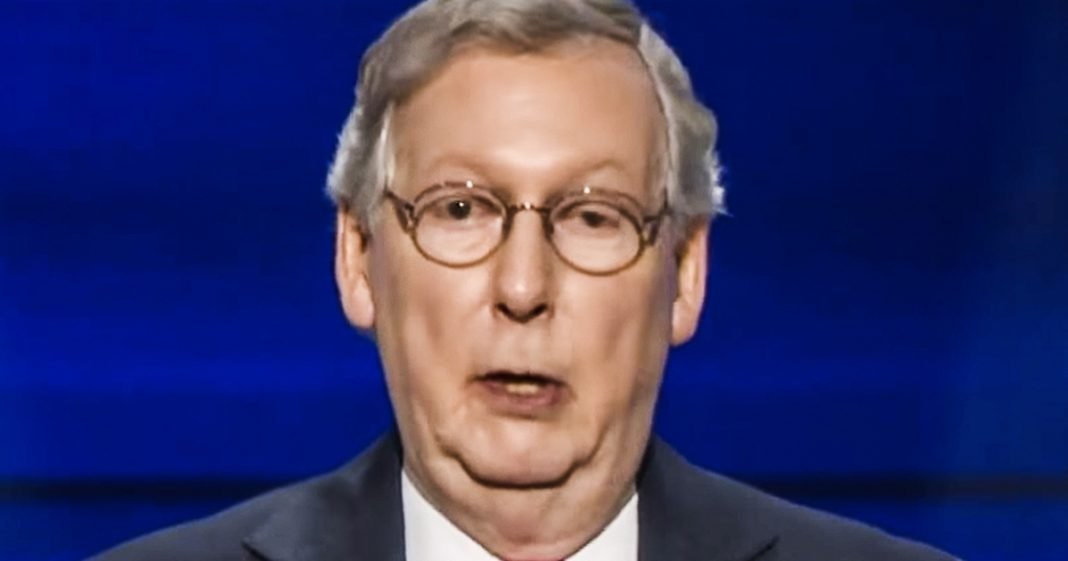 The Mueller Report made it crystal clear – there was interference in the 2016 election by outside countries. Obama wanted to warn the public about this ahead of those elections but Mitch McConnell wouldn’t let him, and being the nice guy that he is, Obama refused to go forward without McConnell’s approval. We’re still in the same boat, except now the Republicans are trying to tell us that even if it happens it isn’t a big deal. Ring of Fire’s Farron Cousins discusses this.

There is a very harsh reality contained within Robert Mueller, the special prosecutor’s final report. Even in the heavily redacted report. Yeah. It may have said no collusion or may have hinted it. No collusion or some people may have taken away from it. No collusion. But that’s not even what this is about. Whether or not collusion took place at this point is irrelevant. What is relevant is the fact that this report detailed the fact that yes, we did have a foreign country interfering with the 2016 election and the interference did help Donald Trump. The question now is what are we gonna do about it? This is a thing that happened and I know you still have your folks out there doing their victory lap saying, we told you there was no, Eh, there was interference though. There really was. And you’re ignoring that like an idiot. Cause if you think this isn’t a big guy a deal, then yeah, you’re an idiot.

And you also fall into the same campus. People like Jared Kushner and Rudy Giuliani who are out there this week telling us that know the interferences and a big deal. We’re fine path. We don’t need to do anything about it. The Trump administration has repeatedly refused to do anything about it. Hell, back in 2016 when Barack Obama wanted to warn the country that this was happening because they knew about it, Mitch McConnell stood up and said, I’m not going to sign onto your little letter warning about people and then you’re going to look like a partisan who’s trying to help Hillary and Aha, I’m not going to help. And so Barack Obama said, oh darn it. You’re right, our, I won’t, I won’t do anything. I’ll just let them interfere. And I’m exaggerating about what was actually said. But that is actually what happened. Obama being the nice guy that he always is, said, Oh Mitch, you got me over a barrel here.

Nothing I can do. So he didn’t warn us, he didn’t do anything. And now Mitch McConnell was still refusing to allow any kind of efforts be done to protect our elections here in the United States. But let me put it this way, if you, they, Russia is the only bad guy out there. And the only people that want to interfere with our elections, you are sorely mistaken. They’re not even the most important ones. Sure. They did some things in 2016 that were unsavory and likely influenced and swung this election, and that’s not okay, but they’re not the only ones. We’ve got Saudi Arabia there. We’ve got China out there, and more importantly, we’ve got the hacker down the street who can change vote totals. We have a 11 year old children in this country who are tech savvy enough to be able to hack into a states voting system and start changing votes. That is how vulnerable our voting system is here in the United States. So I think rather than worrying about a country spending, even if it’s millions of dollars on Facebook ads, I think we need to start with the fact that we have a voting system that is so insecure that literally a child can change.

It takes a very smart child, but nonetheless, children have been documented to be able to get into these voting systems and change them, and that’s actually been going on for at least 15 years. Maybe even a little bit longer, long before Russia ever thought about buying Facebook ads to Swain election because Facebook didn’t exist at the time. But this problem did from so many different angles. There are attacks on our voting system here in the United States. Those from foreign entities, those from hackers, and more importantly, those from Republicans. They’re purging voters, they’re suppressing voters down in Florida, we’re instituting a poll tax. Texas is trying to, uh, purge everyone from their voting rolls that has a Hispanic sounding name.

There are so many different attacks on our election system and somehow some way Republicans don’t want to do anything about it because all of these attacks always every time somehow end up benefiting the Republican candidates. Now that is one hell of a coincidence, isn’t it? But go back and look at the history and show me any instance of voter fraud or vote changing or election interference that didn’t benefit the Republican Party and you won’t be able to find a single example. We have been covering this for fifth teen years and literally nothing has changed. Nothing except for the fact that things do actually seem to be getting worse. You’ve got other people out there, Brad Friedman with Brad blog, Ari Berman, people about a black box voting. All these folks that have been covering this issue, uh, Brad Friedman been covering it longer than pretty much anyone. And here we are today, 16, 17 years after people like Brad originally started warning us about this, only to find out we’ve done absolutely nothing. We’re going to continue to do nothing because Republicans won’t let us. And it’s actually getting so much worse than it was when it first was uncovered. But keep in mind that people refusing to take action are the Republicans. Why? Because the people who benefit from this also happened to be the Republicans.