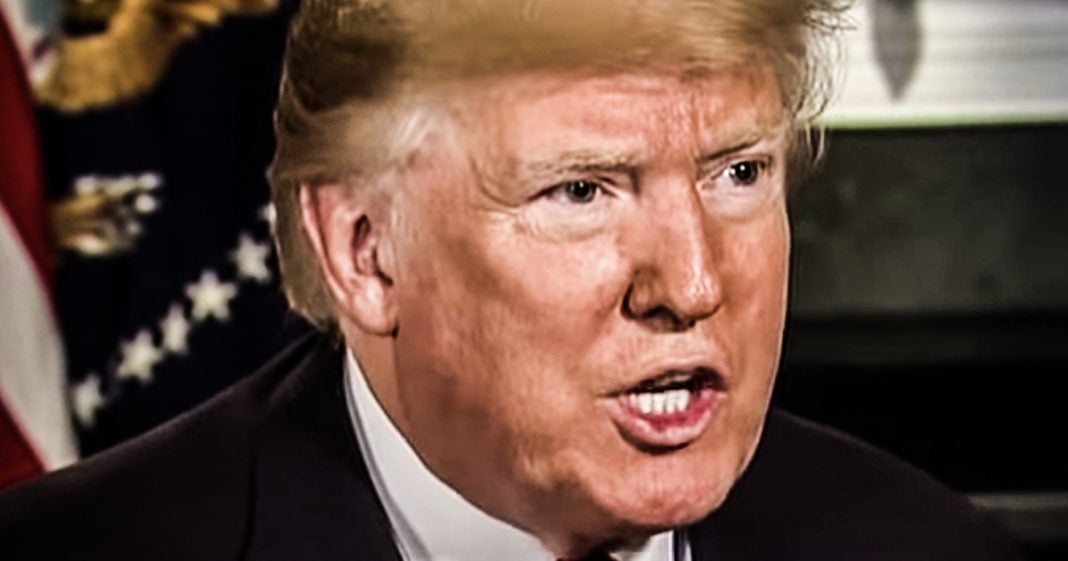 During an interview with Sean Hannity earlier this week, Donald Trump admitted that he had absolutely no evidence to back up his claim from 2017 that Obama had his wires tapped and that he was surprised at how much that claim blew up in the media. The man is a pathological liar and he will say whatever he feels like saying if he feels he will personally benefit from it. Ring of Fire’s Farron Cousins discusses this.

So on Thursday evening, Donald Trump appeared on Sean Hannity’s Fox News program where he actually admitted that he flat out lied about Obama wiretapping him. That was the claim Donald Trump made in march of 2017 was never able, in spite of many people asking to provide any evidence to support this, the intelligence agencies said, what the hell are you talking about this? This never happened. We, we worked for you. We tell you if it did and it didn’t. And Sean Ha, uh, excuse me. Donald Trump finally admitted to Sean Hannity that he made it up. Here’s the exact quote. I’m going to read it word for word. I don’t know if you remember a long time ago, very early on, I use the word wiretap and I put in quotes, meaning surveillance, spying. You can sort of say whatever you want. Now I understand why because they thought two years ago when I said that, just on a little bit of a hunch and a little bit of wisdom, maybe it blew up because they thought I was wise to them or they were caught. And that’s why, because if they weren’t doing anything wrong, it would have just gotten by. Nobody would have cared about it. It was pretty significant. I thought when I said it and it’s pretty amazing.

You know, it’s funny is when I was reading this story, uh, before sitting here and doing this, I didn’t realize how bad those sentences were spoken. Um, it didn’t seem that horrible until I say it out loud, but my God, this man has got to get a better grasp on the English language if he wants to continue giving interviews. But that’s totally beside the point. The point here is that he admitted they’re a little bit of a hunch. So we said a little bit of a hunch and a little bit of wisdom, maybe, maybe some wisdom. Mostly hunch. Yeah. He spied on me. Why not? My wires were tapped. Go to town America, do what you do. He lied about it. Yeah. Manafort got tapped and that was all perfectly legal. We know that with Trump was not, Trump tower was not wire tapped. Whether or not anybody coming or going from Trump tower was wire tapped.

That’s different story all together. But that’s not what the president is claiming. Donald Trump just admitted that he had nothing to go on and in fact was even shocked that this claim blew up so much. Wow. What a great lie. It’s amazing that everybody believes this now. And not to mention the fact he’s totally wrong. Like if somebody goes out there in lies about you or says something you don’t like, you don’t just let it go. You know, when he made the claim, the reason a lot of people were talking about is cause it was a baseless claim. It was a lie. And he was smearing his own intelligence agencies. And that’s why it was so important. But here’s the thing is the big takeaway from this one, not only the fact that he lied about it and now he’s accidentally, I think admitting it, um, it’s that this man will lie about anything as long as he thinks he is going to personally benefit from the lie. Doesn’t matter what it is. I mean really this particular lie, when he came out and tweeted it and march of 2017 and said Obama had my wires tapped, he had necessarily nothing to gain from tweeting that out.

She said his poll numbers weren’t phenomenal. People were still unhappy about the election, how most of us still are right, but he just needed something. He just needed a random little thing to tweet out to say to get his base riled up. Maybe increased his poll numbers and so that’s why he did it. It wasn’t relevant to anything that was particularly happening in the news that day or that week or whatever it was. He just, he just created this lie in his head because he wanted to see what would happen. That’s pure psychotic behavior purely, and this man is still, for some reason, the president of the United States today. I mean, we can only be warned by psychiatrists and psychologists and other mental health professionals so many times that this man is unstable before we basically just all deserve what happens as a result of this. We’ve been worn since day one. This man is now openly admitting it. Hell yeah. Just lie for fun to see where it goes. Is Own. A former staffers have admitted Scaramucci that me just lies for fun. Okay.

It’s not fun for anybody else. It’s dangerous. And this country thanks to Trump and his non stop lying is on a very dangerous path. Congress could fix this immediately and for the life of me, I still don’t understand whether sitting on their hands and not taking action against him.