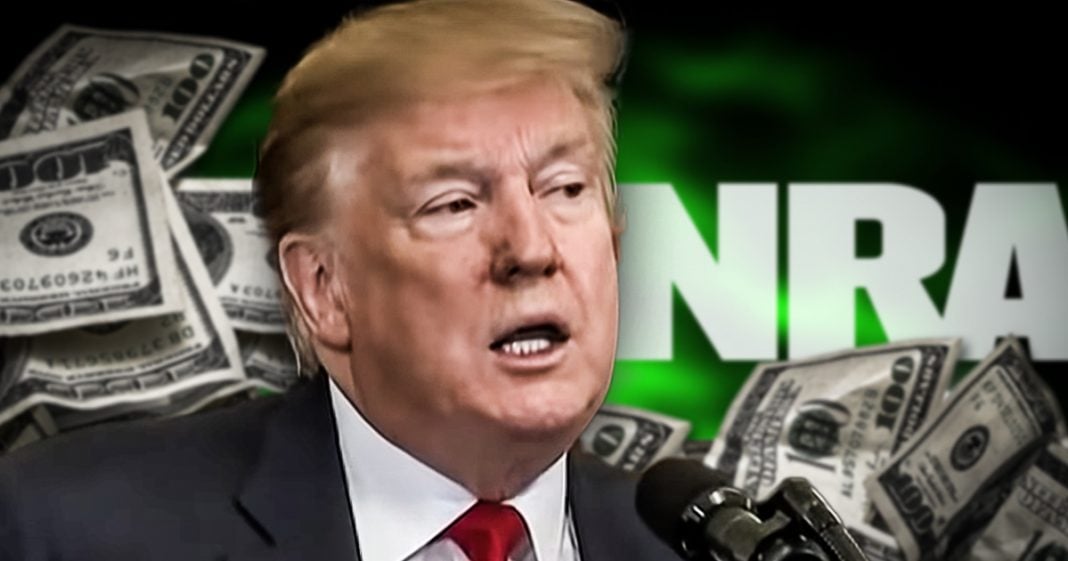 The NRA is being sued by the Giffords Law Center for allegedly violating campaign finance laws and illegally coordinating with Republican campaigns, including the campaign of Donald Trump. The charges in the lawsuit are incredibly serious, but part of the complaint says that the FEC has been made aware of these issues and never did a single thing about it. Ring of Fire’s Farron Cousins discusses this.

You know, the NRA has had a bad couple of years when you think about it. Uh, not only do they have a, a, you know, former war criminal now sitting at top of their organization, Ollie North, uh, but they’ve also been busted taking illegal foreign money, essentially being used as a money laundering operation to help influence politicians here in the United States. And now this week they’re being sued by the Giffords law center for all of their potentially illegal campaign contributions and campaign activities over the last few election cycles. According to this lawsuit filed by the Gifford Center against the NRA, the group gave wellover the legally allowed limit to several different candidates, including 25 million to Donald Trump, even though they were only allowed to give 5,000 to Donald Trump. So they exceeded the legal limit on contributions by almost 10,000 times with the amount of money they gave to Donald Trump. And here’s the thing, the Giffords law center didn’t necessarily want to file this lawsuit.

They’re being forced to file it. Essentially because the federal elections commission, the FEC refuse to take action on all of the complaints that the group has been filing against the NRA for all of these potentially criminal activities they’ve been carrying out for years. Finally, the Giffords law center said, enough is enough. We have handed over the evidence. We have filed these complaints with the FTC. We have followed the letter of the law and the FEC turned a blind eye to it and they said, we don’t care. We’re not going to do anything. We’re not going to address these. It’s so now the lawsuit had to be filed and it’s about time. I, I applaud and I admire the Giffords law center for doing everything they had to do. I also admire them for finally saying to hell with this, we’re filing the lawsuit. We’re going to find out what’s going on because that’s what needs to happen.

The NRA is a disgusting, deceitful organization that consistently goes against the wishes of even their own members. This is not an attack on the NRA members. A majority of them actually support responsible, meaningful gun control measures. They are not the same as the leadership of this organization that consistently appears to be breaking the law. Here are the people who have, uh, been listed in the lawsuit as receiving well over the legal limit in campaign funds from the NRA, Republican Senator Thom Tillis, Republican Tom Cotton, Cory Gardner, Ron Johnson, Josh Holly, and Montana’s republican state auditor, Matt Rosendale. In addition of course to Donald Trump. And all of these donations took place 2014, 2016 and 2018. Every one of them happens to also be a republican. The NRA is way past needing to be investigated. We know they are taking money illegally from foreign countries that, that that’s a thing that’s already happened and we know that it’s happened.

The evidence shows it. And now we find out that in addition to taking illegal money, they’re also somehow giving massive amounts of money to these candidates, including the 25 million to Donald Trump and there illegally coordinating with these campaigns. Thanks in part to the illegal money that they took. Now if I didn’t know any better, I daresay that the NRA is nothing short of a money laundering organization that other countries are using to funnel money to influence politics here in the United States. But I guess that’s something we’ll have to wait and see when the discovery phase of this lawsuit finally begins, and I guarantee you that is something we’re going to find.