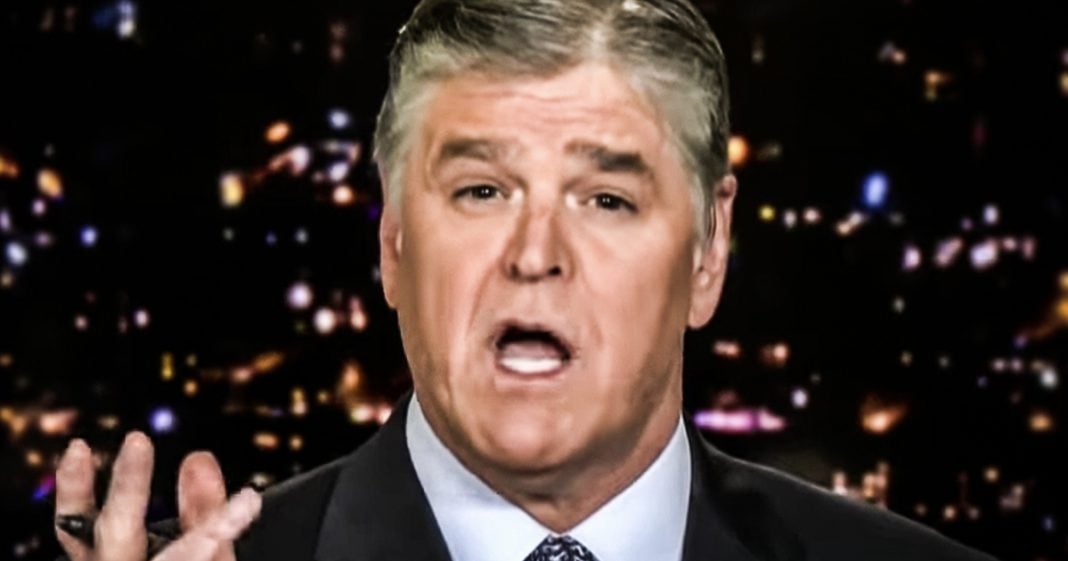 According to a new report, Fox News insiders say that Sean Hannity is actually considering leaving the network because he believes that they are no longer loyal to Donald Trump. This echoes recent reporting about a brewing civil war taking place behind the scenes at the network between real reporters and the on-air talent. There’s no question that the hosts on the network are starting to question Trump more, but is that enough to make Hannity leave? Ring of Fire’s Farron Cousins discusses this.

For the second time in as many months, new reports have come out saying that Sean Hannity is getting even angrier with his bosses at Fox News and sources inside Fox News are now saying that Hannity says he is going to leave the network after his contract expires in 2021 and the reason Hannity the the top of viewer grabber for Fox News, the reason he wants to leave the network is because he doesn’t think they’re loyal to Donald Trump anymore or maybe they’re not loyal enough to Donald Trump anymore. Again, this is the highest viewed host on the network. The guy who loves to tell us he is not a journalist and he wants to leave the network, leave his multimillion dollar a year salary because they’re not loyal enough to Donald Trump and as I mentioned, this is the second time that we have seen these reports come out because believe it or not folks, there is a little bit and my old civil war brewing in the offices up there at Fox News.

Here’s what’s happening. You have the actual news reporters and the journalists who work at Fox News because believe it or not, they actually do have some of those people there. They’re talented people. They know what they’re doing, and those people are getting angry that you have these morons, Hannity, Carlson, Ingraham, Piro who put out the face of the network and the face and the network is hate lies and conspiracy theories. Meanwhile, these people over here, the journalists, they actually trying to do real news. They’re trying to report real things and they’re trying to get the executives at the network to understand that the faces on the TV every day are the ones that are toxic. Now, that’s what we had reported in the past. And that’s also mentioned in these new articles. But here’s the thing, it goes a little bit beyond that, right? Cause what’s happening right now is Fox News is losing a lot of sponsors.

The public, anytime Tucker Carlson goes out there and does his white power hour, we start calling for boycotts and the boycotts work. We start calling out the sponsors on social media saying, how can you support this? Yeah, we put the clips out there and say, this is what you’re supporting, and they pull their ads. It’s happened with Hannity, it’s happened with other hosts on the network. So the network is starting to pull in less money. So it doesn’t matter that Hannity has the highest ratings. It doesn’t matter that he’s pulling in the audiences, they’re starting to get a little perturbed up there and the executive suite that they’re not making as much money as they used to. There’s still hugely profitable, but it’s not as much money as they used to pull in and that’s eventually going to become a very real problem. Let’s not forget Fox News is still a business and for too long they thought that their business was just propping up Republicans.

But it turns out the people that run the network, yeah, they love Republicans and they’re all horrible. People don’t get me wrong, but they also love money. They love money more than they love Republicans. It’s a close, it’s a close love. You know, like when your kids ask you which one you love more and you say we love you all equally. But now the people at Fox News love money the most and then Republicans and they’re starting to lose a little bit of that money because of their love for the Republicans and that’s making Sean Hannity mad. The love of Republican. No, I’m sorry. Not The love of Republicans. The love of Trump Hannity says should come first and Lockland Murdoch, who’s now running the network is not loyal enough to Trump. We think secretly Hannity says they’re out to get him and there’s other hosts on this network starting to have their grumblings that all Trump’s dishonest.

Trump’s lying. Trump broke the law. Napolitano told us earlier this week and Hannity ain’t having it handed. He’s getting mad and Hannity may decide after his contract expires in 2020 according to all the sources that this is just too much. I am a Trump guy through and through. He is my best buddy in the whole world and I am not going to work for a network that won’t put 100% of their blind faith and loyalty into my best friend. Well, good luck with that mentality, Sean. I’m sure that’s going to serve you well in the future.