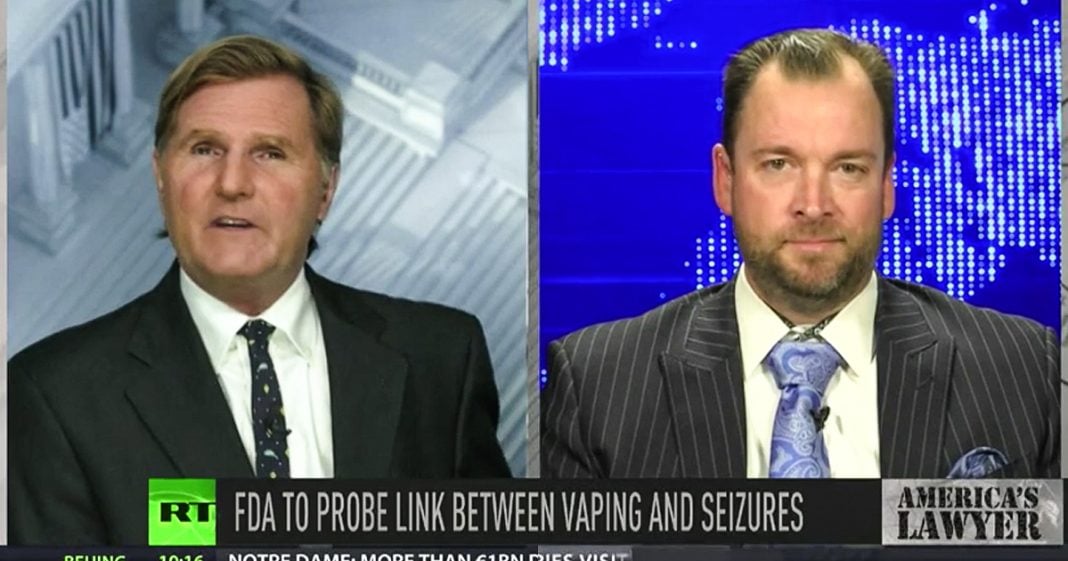 Mike Papantonio:             Juul e-cigarettes have now been linked to at least 35 seizures in users over the past eight years and investigators suspect that those numbers are going to grow as the investigation continues. Joining me to talk about this is Scott Hardy, he’s the president of Top Class Actions. Scott, I saw, you saw the early edge of this. I remember you did a story on this almost when it first began trying to warn consumers. Tell us what investigators have found out about the Juul e-cigarettes. It’s a pretty ugly story.

Scott Hardy:                          It really is, Mike. I mean what we found with the Juul e-cigarettes is that they really came on the market and just exploded. It wasn’t just a, you know, a small little group and people thought, Juul cigarettes, come on, we’re really going to see big tobacco behind this. No, Juul came out with a special formulation which they patented and has just grown astronomically. The big difference between Juul and a lot of the other e-cigarette manufacturers during that same time period is that they are based on nicotine salts and so each of these little Juul cartridges that you plug in to your Juul e-cigarette has the same kind of feel and the same nicotine hit that cigarettes do because nicotine salts are to give you that same kind of hit just like cigarettes do.

And so they’ve actually grown astronomically. We’ve seen a $15 billion valuation for Juul last, at right about at the end of last year and sales spiked 641% between 2016 to 2017 because Juul hit this market hard of giving people a very similar nicotine hit as to using a cigarette and of course coming out with lots of yummy flavors that adults and kids really love.

Mike Papantonio:             Yeah, Scott, you know your, I love your reporting. Top Class Action honestly is the best site to get these stories. We go to Top Class Action before we do these stories many times. The FDA is still unsure of whether these seizures were caused by the e-cigarettes, which is so typical of the FDA, isn’t it? I mean FDA, it’s almost like they’re the last person to ever know that there’s a product on the market that’s killing people.

We saw the same thing all the way, as you know, our law firm handled, we handled the tobacco litigation years ago and we got very little help from organizations like the FDA. But we do know that users typically get much higher doses of nicotine and that’s, that’s before we even analyze what are the, what all the other component parts, what are the other chemicals in there that’s causing people to have seizures. The FDA hasn’t even looked at that. It is a little troubling isn’t it Scott?

Scott Hardy:                          It’s very troubling and for the FDA to come out here on April 3rd and say yes, we, we’ve got reports of 30 plus seizures happening and yes, this a bad thing and that we’ve seen an increase in seizures that is, it’s a market increase in seizures that have all been directly connected to e-cigarette use. And so what really makes Juul come into play is the high doses of the e-juice that they give you and the nicotine that they give you. Because each pod, each tiny little Juul pod that you connect to your e-cigarette has as much nicotine as an entire pack of cigarettes and in these Juul pods, it’s a mix of glycerol, propylene glycol, nicotine, benzoic acid, and of course the flavor we’ve talked about. And so that nicotine content is 0.7 milliliters per pod, which is approximately equal to one pack of cigarettes or 200 puffs. And so with one little pod you’re sucking down an entire pack of cigarettes.

Scott Hardy:                          So the complaints that we’ve seen so far specifically from the FDA are from, are from e-cigarettes as a whole. The FDA didn’t actually identify whether it was Juul cigarettes, e-cigarettes or whether it’s other manufacturers. But Juul can actually has 70 plus percent of the e-cigarette market. And you know, you would think that big tobacco would be making a big play here and of course they are, but they’ve been slowly rolling out into it and Juul just came into the market and, and really blew things up. And so now we’re seeing this use just drive up dramatically from middle school on through high school because kids think that it’s vape. They’ve got this message, this tastes like, it tastes like fruit punch. You know, this is, this is just steam. This isn’t bad for you when in fact they’re getting these kids addicted.