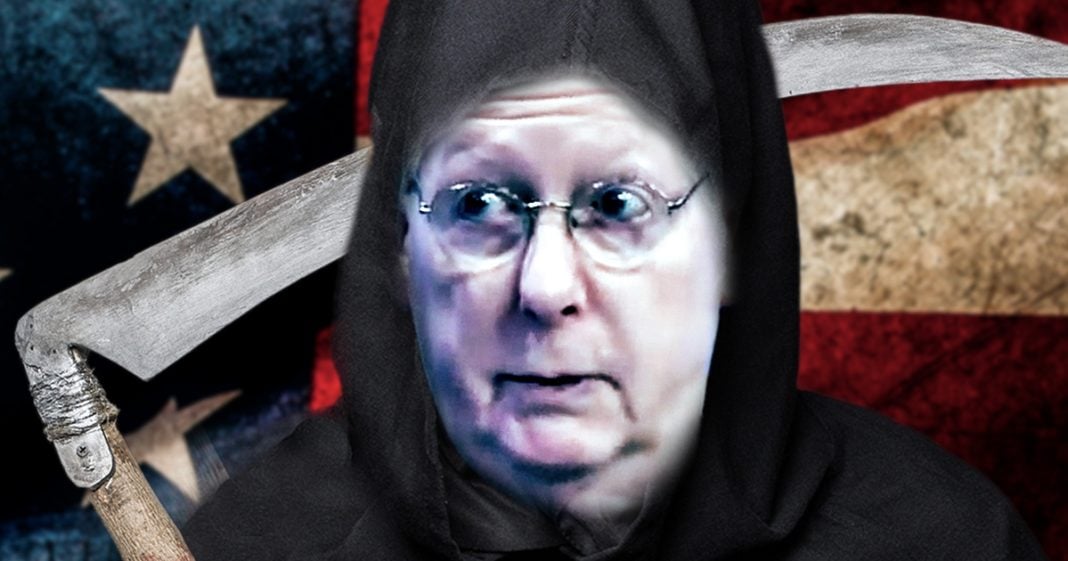 Mitch McConnell recently told his constituents that he would personally kill any progressive legislation after the 2020 election if he is still in charge of the Senate, referring to himself as “the grim reaper” for these policies. This man has spent 3 decades in the Senate doing his best to prevent any form of meaningful change from happening in this country, and his latest proclamation is just further proof that he needs to be voted out of office immediately. Ring of Fire’s Farron Cousins discusses this.

I know everybody’s wrapped up in the presidential election because we’ve got 80 a thousand Democrats running for President Against Donald Trump. He’s now got a primary challenger, uh, in Bill Weld. So there’s a lot of people running for president. But let’s also not forget that 22 republicans in the United States Senate are also up for reelection almost twice as many Republicans as Democrats up for reelection in the Senate, which means control of the Senate is up for grabs in 2020. And that might be just as important. No, that is just as important as the presidency. And here’s why.

Yeah, not that long ago, a few days ago, Mitch McConnell goes to Kentucky and he tells voters in Kentucky that, hey, you got to vote for me in 2020 because if you don’t, Democrats are going to come along. And what are they gonna do? They’re gonna, they’re gonna pass a Green New Deal. Ooh, they’re going to pass Medicare for All. Ah, they’re going to create a living wage of $15 an hour. Ooh. So vote for me because I am the grim reaper of progressive policies. Let me go ahead and read you the exact quote. Are we going to turn this into a socialist country? Don’t assume it cannot happen. If I’m still the majority leader of the Senate, think of me as the grim reaper. None of that stuff is going to pass. None of it. Mitch McConnell’s been in the Senate for 30 years.

Guy should have been term limited a long time ago, but for some reason we don’t have term limits on senators and members of Congress. We should, and Mitch McConnell is the prime reason why, but Mitch McConnell, the man who just a few weeks ago, bitched in an op Ed that Democrats are too obstructionist, is now literally running on a platform of obstruction for proposals that a majority of people in this country actually support, including Republicans. So he’s literally literally telling his constituents that even though a majority of people in this country support these things, I’m going to block them because I’m the grim reaper of progressive’s. It’d be a cool death metal band name. But aside from that, it literally is telling your constituents, I don’t give a day on what people in this country want. I’m Mitch McConnell and I’m going to do it my way. Mitch McConnell is done. Mitch McConnell deserves to be done and Mitch McConnell needs to be voted out of office in 2020 he’s trying to kill things like the Green New Deal. Even though his State, Kentucky has the highest cancer rate in the United States. This man has presided as their senator for 30 years pushing these anti environmental policies, these pro coal policies that are literally killing his own constituents and he doesn’t care one bit. I think about that. The man is literally pushing policies to kill his own voters in somehow the survivors keep voting him in

Mitch McConnell is absolutely one of the worst human beings, not just in the Senate, but probably in the entire United States. Definitely at least the entire state of Kentucky, but these voters have to wake up because Mitch McConnell isn’t just winning reelection by cheating. He’s winning reelection because these people were voting for him. The people of Kentucky have to understand, look around you. Look at the rates of cancer in your state. Look at the number of people dying. Look at your own family members who are losing their jobs in an industry that is dying because demand is dying, but Mitch McConnell’s swears he’s going to revive it even though he knows he can’t and stop putting him back in power. Majority of you want Medicare for All. Majority of you want the Green New Deal. Majority of you want debt free college. Majority of you want a living wage. Majority of you want corporate money out of politics and you want citizens United overturned. Mitch McConnell was promising to stop every single bit of that. Is that really what you want to be known for? Is that really the kind of guy you want representing your state to the rest of this country? Or do you want to put somebody in office who actually cares that the people who voted for them last election died before the next one? Because Mitch McConnell doesn’t care about that. His policies prove it. So how about you start putting somebody in office that actually cares about you and you send Mitch McConnell into a retirement that he should have began roughly 20 years ago?