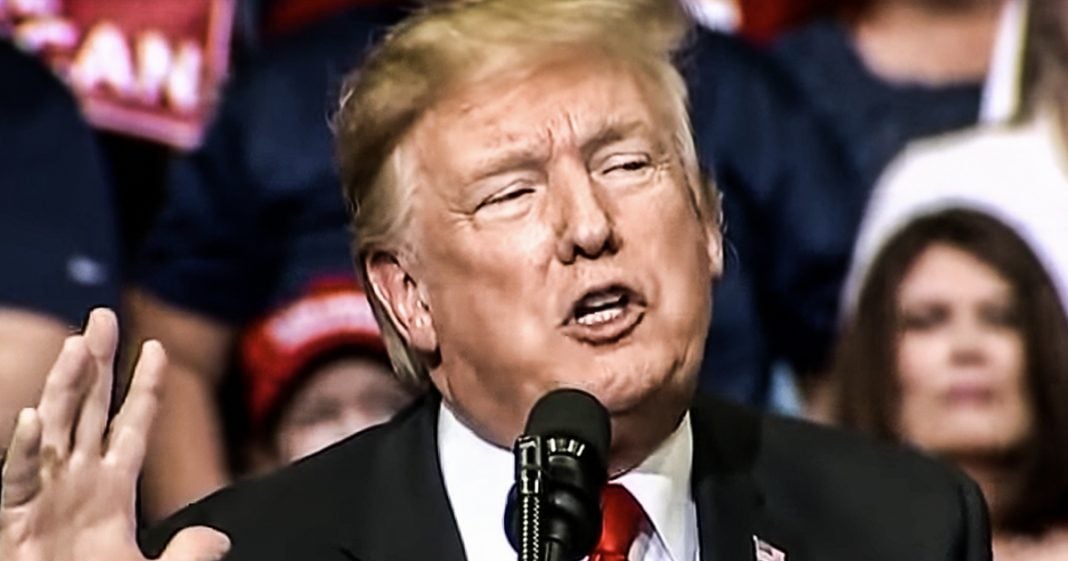 Donald Trump scared away many high profile Republican donors in the 2016 election, not that he really needed their help, but those high rollers are now embracing Trump with open arms and are pouring millions of dollars into his reelection campaign. Hundreds of donors who wouldn’t touch Trump with a ten foot poll are opening up their checkbooks, but as Ring of Fire’s Farron Cousins explains, this may not work for Trump the way he thinks it will.

trumpOn May 7th, Do Trump and his campaign for reelection in 2020 are you going to be holding a little fundraiser event? And if you donate $25,000 or more, you’re going to be a part of it. You get to come in, you get to a, you know, get your hands on maybe some of these retreats, maybe some policy discussions, maybe some, uh, dinner with the president according to reports by politico. But here’s the thing, just a few years ago Trump was running in 2016, it actually was very hard for him to put together a complete full room of people willing to give him $25,000 to run for president. But now all of these donors that we’re scared of Trump in 2016, they’re all coming back. They’re all coming back to the Republican Party. And in fact, donors who sat out 2016 because they were disgusted Trump are now giving millions of dollars according to this politico report, uh, to Trump reelection campaign.

And here’s why. Dallas Republican. Roy Bailey said he’s seeing commitments from about 150 donors, some of whom had strongly opposed Donald Trump in 2016 um, they were slow to come on board according to a Bailey. I’ve had a couple people then in 2016 they just weren’t on board with candidate Trump at all and they said, look, Roy, he has won me over. I’m all in, and there’s a reason why they’re all in now. I’m going to get to that in just a second. I’m going to let their own words do the talking on that as well. But Donald Trump struggled to raise outside money from the big Republican donors, most of them in 2016 but now all of them totally on board. We’re going to give to Trump even though the dude doesn’t need it because according to him, he’s worth what? $10 billion. We get our hands on his financial records.

I’m willing to bet. We’re going to see it’s a lot less than that. But even if it is, he could still totally afford to run his own campaign without ever having to ask another human being for money. He won’t do that cause he loves his money, but doesn’t mind spending your money. So please keep that in mind if you’re a thinking about donating to Donald Trump, he’ll blow your money. Hope set it on fire if he feels like it, but he won’t ever touch his own. But here’s the thing. This is why everybody’s all on board now. And this is according to Jeff Veer off, uh, who bundled more than $1 million from Marco Rubio’s failed Republican presidents or campaign. Uh, he said, all you have to do is look at what the other side is gearing up for. And this is a pretty easy decision for a lot of people.

From a policy standpoint, there’s virtually nothing they disagree with. Then layer on top of that, the choice that the other side is presenting to the country and it’s a no brainer would Mr

Hoff did right there was he brought home a point that we have been saying since before Donald Trump was even elected. Republicans hate Donald Trump shirt on the outside but they stand for the exact same things on the inside. There are no policy disagreements within the Republican Party between your donors, between your members of Congress or senators and the president. Sure. A different Republican would not have attacked folks on Twitter every single day,

but the policies would have been saying the judges that they’re putting in place would have been the same. We would still have kids locked in cages. We would still have this horrible economic policy that is benefiting the wealthy and screwing over everybody else in this country and that is actually another reason these big money donors are coming on board like, hey, we got a ton of money from this guy. We can give him a little back to repay him and hopefully ensure another four years of it. Because if we don’t, if we get a birdie or we get an Elizabeth Warren in the White House, all crap, all those extra profits that we don’t deserve, those are gone because it’s going to be used to give a few million people some healthcare. It’s got to be used to erase some student loan debt. It’s going to be used to, God forbid, help the country.

That’s where these donors are scared of and that’s why they’re flocking to Donald Trump right now, but they’re also flocking to them because they finally realized there is no damage and being associated with this man anymore. There should be, it should exist associating with Donald Trump shouldn’t be the end of your career, but it’s not, and now they see it. Now they know it’s okay to come out of the shadows, shower this man with money because they’ve made a ton of it from his policies to make sure that he stays in office. There was never a disagreement between the Republican Party in Donald Trump on a single policy. The only thing they hated was how abrasive he was on the outside. But today, even that, Nah, that’s not as important as how much money those big time Republican donors have gotten to put in their own pockets, and they’ve got so much now that they’re going to start giving the overflow to Donald Trump.