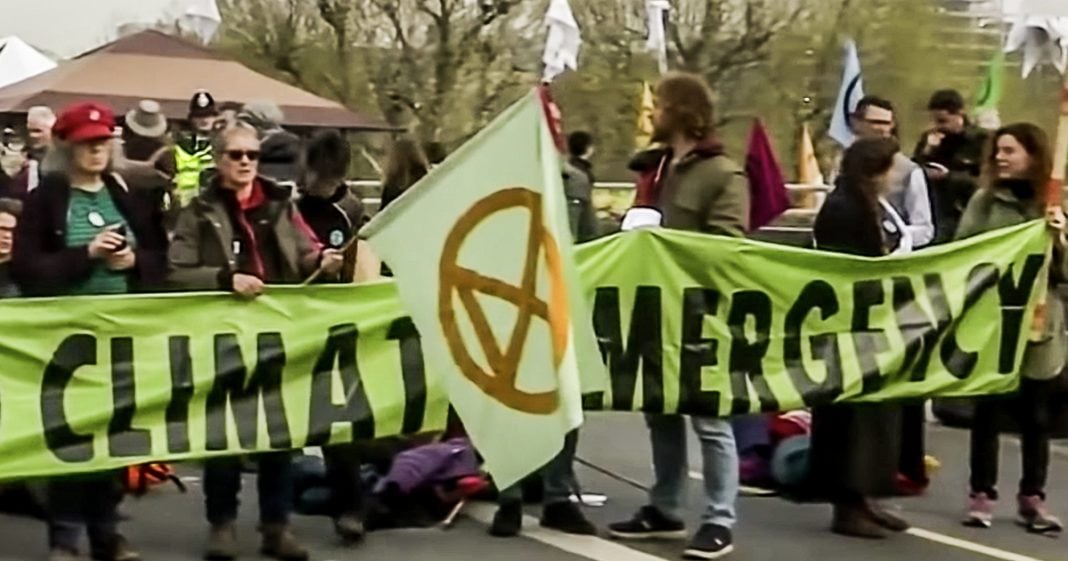 According to a new report, global economic inequality is growing considerably worse as a direct result of climate change. We’ve seen firsthand here in the United States what happens as a result – migrants from poorer countries that are suffering from climate change travel in hopes of finding a better life. But imagine how many migrants we’ll see in a few years as these problems continue to go unchecked. We’ve been warned for more than a decade that this would happen and our elected leaders just let it happen anyway. Ring of Fire’s Farron Cousins discusses this.

You know, the first time I saw an inconvenient truth, the thing to me that was most compelling was that part in that film, when Al Gore was talking about climate refugees, they started talking about, oh, you know, this year there were this many refugees and oh my, it increased to this many. But just imagine when all of this bad, horrible climate change stuff, and then you have millions of refugees coming into your country every year. That for some reason is one of those lines. It’s one of those things that I’m literally gonna Remember, it’s going to stick in my brain until the day I die. I don’t know why, but that particular line had a profound effect on me. And here’s the thing. Gore was 100% correct according to a new study, um, from proceedings of the National Academy of Sciences, lead author, a doctor Noah Diffenbaugh. Um, poor countries across the planet are growing poorer as a result of anthropogenic climate change, manmade climate change.

They’re growing poorer from already being poor. We’re talking about India, Nigeria, other countries in Africa, countries in central and South America. Those people who already had nothing. Now we’re going to have even less and now do have already less because of climate change. And this was not some kind of, you know, prognostication. They weren’t trying to look off into the future and say where they’re going to lose money. Now they actually looked at the last 50 years for this study of 165 different countries, the GDP of 165 different countries for the last 50 years. This was a massive comprehensive study and what they found was that poorer countries have grown pourer because of climate change. While wealthier countries, typically white countries are getting richer. So the white countries in cooler climates, again, typically wider, we’re talking Norway, Sweden, Denmark, um, they’re making a lot more money.

Their GDP is going up. While the poorer countries have watched their GDP steadily declined and they were able to directly link it to climate change by comparing these GDP drops and growth with 20 different climate models for the last 50 years. I told you this was a very comprehensive study. Um, I met doctor Noah Diffenbaugh at a, a, a symposium back in 2009. He’s a brilliant man. Absolutely brilliant. Um, and I trust his work on this and his research team. But here’s the thing, and it all comes back to what I started talking about. Al Gore’s a prediction of all these climate refugees. We’re already seeing climate refugees today.

Yeah. All those people, the Trump tells us all they’re coming up from Guatemala and Honduras. Yeah. Those are areas that have been directly impacted by climate change. You know, closer to the equator. The hot days get hotter, the droughts get more severe, the floods get worse when the floods do happen. The crops can’t grow because of the wild temperatures and violent weather. People have nothing. So they have no choice but to leave. And when you create that kind of economics to instability, that does allow the cartels to come in and take over. For some people, that’s the only line of work they can find. And how do we know that? Because we’ve been watching it happen in the Middle East for 10 years with al Qaeda and Isis.

They have actually used climate refugees in the Middle East to come join their ranks. People having to move from the farm lands because the farmlands are no longer arable and they have nothing else. Then these organizations come in terrorist groups and they promised them a better life. You say, hey, come fight with us. We got food, we got water, we had shelter. You know, we can pay you just come be a terrorist with us. This is actually according to reports at the Pentagon. The Pentagon tells us and has been since 2006 that climate change is the biggest threat to our national security. We know that this is happening in the Middle East. We know that it’s happening in South America and Central America. Poor countries are losing money every single year. People are losing their way of life and they have nowhere else to go, but they do know because of climate change that they have to go and show all these richer countries, these wider countries that are enjoying all of this economic growth and not necessarily dealing with some of the worst effects of climate change.

Well, guess what? That’s where these people are going to go. Because you’ve been sitting there for decades, being a bigger polluter, being a bitter, a bigger emitter, and yet somehow making a huge profit off of it while everybody else suffers. Well, those days are done because these people need a place to go. And the countries who caused this problem and are somehow still profiting from it, they should be the very first ones to open up their borders and say, come on in here. We screwed you over. We’ve ruined your life. Let us help you put it back on track.